To get to Belize, we first flew to Miami on a red-eye flight from Denver. That meant that we didn’t have to leave our house until the sun was setting. We took the Denver RTD bus to the airport, which was a helpful preview of managing our packs.

Red-eye flights are never fun, but we did manage to sleep a little bit. We got to the Miami airport at about 5 AM local time and found a relatively quiet corner to try and sleep. However, it was tough because the airport was really cold! And we didn’t think to pack anything for warmth in our bags, because we were heading to Belize…

Travel Advice: Never underestimate the probability of over-air conditioning in a public space.

The flight from Miami to Belize City went pretty quickly. Upon arrival and clearing customs,we caught a cab into Belize City. The cab was $25 (US), which seems like a big rip-off, but there aren’t really any public transportation options unless you are willing to walk quite a distance to the highway.

We hadn’t heard that there was any great reason to stay in Belize City, so we had to cab take us straight to the bus station. After getting out, some people came up and asked where we were trying to go. We assumed they had nefarious motivations, but it turned out they actually were very helpful and took us straight to our bus which was about to leave!

In Belize, the public buses are old school buses, so it felt very familiar to us to be riding one. The bus was pretty full, so we had to ride with our bags uncomfortably on our laps. We told the “conductor” where we were headed and he said he would tell us when our stop was coming up. Then, he cranked up the reggae on the bus sound system and we were on our way down the Western Highway.

Travel Advice: In Belize, you don’t pay for the bus when you get on. The conductor will come by at some time during the ride itself and ask for your fare. We never determined if there was a formula for when he decided to make his rounds or not.

Our final destination for the day was San Ignacio all the way on the western border of Belize. Belize is so small that this means that it is only about 120 km away. Since it was still early in the day, we decided to stop at the Belize Zoo.

The Belize Zoo had the reputation of being one of the premiere places to see animals in Belize, so we thought it would be a good introduction to the country’s natural wonders.

The Zoo is very easy to get to. The bus dropped us off right at the entrance (it is just off the highway). The Zoo had lockers for us to store our big bags. The entry fee was a little steep though.

The Zoo is smaller than the one in Denver but had quite a bit of diversity of animals. Our favorites included:

Tapir (The national animal of Belize.) 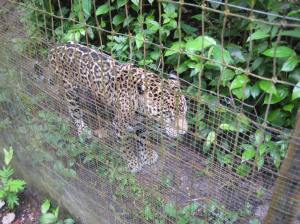 After finishing looking at all the animals, we headed back out to the highway. A westbound bus came by pretty quickly. We flagged it down and headed on to San Ignacio. We made it in plenty of time to find lodging and get some dinner.

A long 24 hours of travel but a fun introduction for our trip!