From Hopkins to Caye Caulker via Belize City

We decided to leave Hopkins by taxi. At this point, we had begun to travel with the couple that went with us on our crazy day in Placencia. We figured that with four people, the taxi expense would not be too bad. Plus, it might be hard to catch a hitch all the way out to the main road. We were leaving on a Sunday, which unfortunately meant that the bus to Dangriga straight out of Hopkins was not running at all. We could have waited until Monday, but we knew that LobsterFest was big in Caye Caulker and it would still be going on through the weekend. We really wanted to make it! We had some sketchy information that the bus on the main road would pass by the Hopkins turn off at about 7 am. So, we woke up early and grabbed our taxi. The driver wanted to take us all the way to Dangriga, but we decided to risk it and see if the bus came. We were shocked when the bus showed up… exactly on time!! It was an easy bus ride that stopped in both Dangriga and Belmopan all the way to Belize City. We arrived at 10:30 am and got a cab to the water taxi terminal headed for Caye Caulker (~45 min boat ride).

We are so glad that we made it to Caye Caulker for LobsterFest. It was such a fun day. One whole end of the island was set up with stalls of trinkets or food… soooo much lobster! We wandered through the activities enjoying music, beer, and ice cream.

There was also an entertainment tent set up with music and some dancing. We enjoyed several silly songs by a man who called himself the “Donkey Man.” But, then it really got good! They did several silly games. 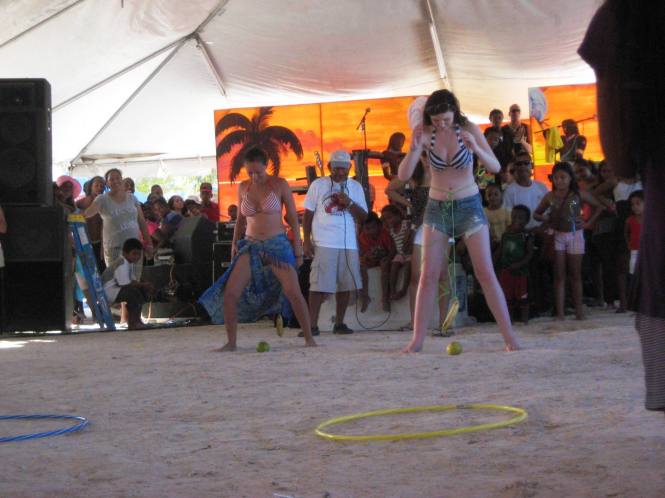 A weird game involving swinging a banana between your legs to hit a mango to roll it into a hula hoop.

Climbing a greased pole. There was a bag of money on the top. Four teams tried over and over again, falling increasingly far and scaring the crap out of us. No one made it in the end. =(

It was a great day!

One thought on “LobsterFest!”