Probably the biggest decision we had to make for our self-drive safari was which company to rent our truck from. The truck would be our transportation and accommodation for 25 days so we definitely wanted something reliable. We ended up going with Bushlore based on their price point and a few reviews we were able to find. Hopefully our review will help anyone trying to make a similar decision in the future!

Truck
The truck itself was a Toyota Hilux (like seemingly every other truck we saw out there). We think it was relatively new – only 27000 km (about 16000 miles) on the odometer when we picked it up. The tires were new as well. 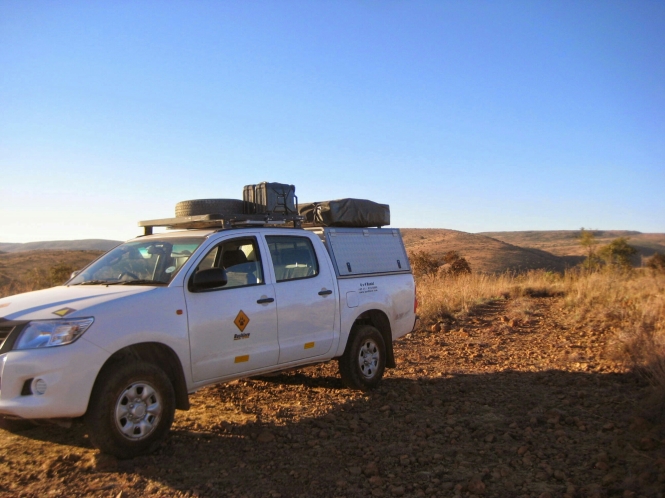 Camping Setup
The bed of the truck was setup with all the supplies and a tent on top. This performed as advertised, with some complaints. Bushlore forgot to fill up the 40 gallon water tank so we had to figure that out on our own. Also, one morning the rope-strap combination that held down the tent travel cover just came apart. We were able to improvise a solution to get it back together using a tent pole, rope and duct tape.

Accommodation
Bushlore provided a service that helped us pre-book our camp sites along the way. This was the part of their services that we were least impressed with. Twice along the way we showed up at a camp where they had pre-booked us and we were told they had no record of the booking. Luckily we were able to still stay, but it was frustrating to have to deal with this after having paid Bushlore to handle this for us.

We also noticed that maybe it wasn’t even necessary to have booked as much ahead of the time as Bushlore had us do. The national parks were definitely full, but other locations had plenty of empty space. So we’d recommend only booking a limited number of sites.

Final Review
It seemed like in general the issues with Bushlore stemmed from the fact that there are a large company, and we didn’t have the personal touch that we might have liked. The truck was really nice, but the service aspect was lacking, which we would have liked since we were so nervous. We’d probably say that if it’s your first time on safari, maybe look for a smaller company to give you a little more attention. But if you have experience, their equipment will definitely do a good job for you.