After our great visit to Prague with Eric’s parents, we planned to head to Krakow, Poland. We thought it would be fun to break up the trip and Eric knew that there was a unique UNESCO site in a small city called Olomouc so we decided to head there. Boy, are we glad we did! Upon arriving and exploring the old town of Olomouc, we decided to extend our stay to 2 nights instead of the original one!

Poet’s Corner Hostel –  This was the top-rated accommodation for Olomouc in the Lonely Planet so we were excited to try it out. It was a nice hostel, with the standard features. We decided to stay in a private room and didn’t end up being as social with the rest of the hostel as we could have been. The best part about the hostel was the good advice they gave us for exploring the town – they gave us a nice map with a lot of recommendations on it.

Olomouc was definitely a nice change of pace from Prague. There weren’t as many things to do, but there were still plenty of monuments and pretty sights to explore, without all of the people!

Our first stop in town was to climb the bell tower of this church in the old town.The staircase was a neat double-helix spiral pattern, so you went up and down on different staircases with the same center. From the top of the tower you could spy a lot of the different sights we wanted to head to next. 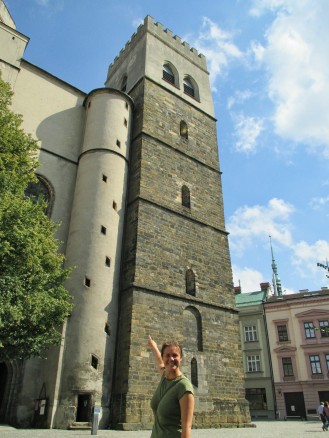 The tower we are about to climb 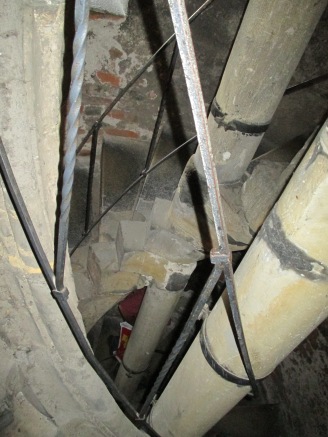 View from the top

Like Prague, Olomouc’s main square has a few different sights. The most notable one in the UNESCO-listed Holy Trinity Column, This column is wide enough at the base that there is a small chapel in it. 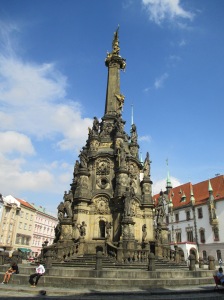 Olomouc has an astronomical clock as well. One interesting aspect of the clock is that the mosaic surrounding it was redone in the 1950s in the communist-area style emphasizing the socialist values. We also enjoyed trying to decipher all of the different dials on the clock faces. 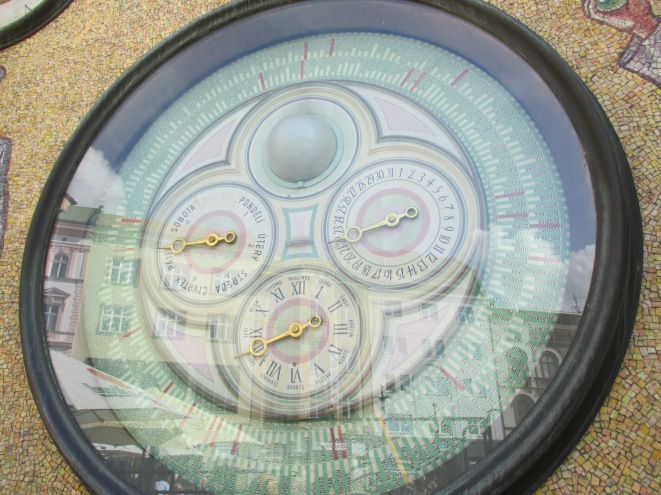 We thought the interior of this church was pretty impressive. Also, in one of its crypts there is a natural spring which they say the town was founded around.

Walk Around the City Walls

We found a path outside the old city walls and along a nice hike and bike trail.

When we started walking around on Saturday, we noticed one wedding party taking pictures in the square. Then, at St Michael’s, we actually climbed the bell tower during the end of another ceremony and the got to witness the bridesmaids handing out shots at the end of the receiving line. Then, at the Saint Wenceslas Cathedral one wedding was wrapping up… as another was getting lined up outside! In the end we saw six different weddings in various stages of the events.

Shots in the receving line

We noticed that the soccer stadium was very close to Poet’s Corner, and the local team, SK Sigma Olomouc, was playing a game on Saturday afternoon, so we decided to check it out. Unfortunately, Sigma had been relegated to the second tier Czech league the previous season, so it seemed like maybe the attendance was a little low. Tickets were cheap though, and we got seats pretty close to the action. Sigma lost 2-0, so the local fans did not seem too happy.There was a small group of hardcore fans who chanted the whole time, but the overall atmosphere wasn’t much different from any US sporting event.

We hoped to try a few different places, but when we went around on Saturday, multiple places were closed! One was for a wedding but the others were just not open. We don’t know if this was a low-season thing (Olomouc is a college town and students were not back yet) or if the town always shuts down on Saturdays.

One place we did eat was the Saint Wenceslas microbrewery. The food and beer weren’t the best, but the price was pretty good. We debated but eventually decided against their “beer spa” experience: we would have bathed in beer!

Olomouc was a nice town to use as a break from hectic sightseeing. There are a lot of nice things to see and not nearly as many crowds to fight through as in other places. Anyone planning to go between Prague and Krakow should definitely consider a stop in Olomouc!