Wow! We have been on the road for 100 days! It is hard to imagine. 100 days before our departure, we ruminated on what traveling would be like: harder or easier than “real life?”  I’m not sure we have the answers to that question yet, but we definitely have some musings we’d like to share after spending 100 days abroad.

People often talk about how much traveling has changed them; made them see things in a new light, reformed their views on life, etc. I can’t say that has happened yet for me. However, there are certain things that I have struck me while exploring the countries we’ve been to.

1. We often think of America as a young country, and it is! However, there are so many countries out there that are even younger, becoming what they are as little as 20 years ago. This observation comes knowing that we chose to visit only very specific parts of the world in the last 100 days. But I was amazed at how many of them are new countries, countries that only became what they are in the 1990s… In my lifetime. South Africa threw off the reins of apartheid, violently, in the 1980s and early 90s. Namibia was part of South Africa (and before that German South West Africa) until 1990. The Czech Republic, Poland, Slovakia, and Hungary left communism and created new governments and new economic systems in the late 1980s and early 1990s. The rest of the countries we’ve visited: Slovenia, Croatia, Bosnia Herzegovina, and Montenegro were all former members of the communist Yugoslavia. The majority of those countries declared independence in the early 1990s, creating new governments and market economies. Montenegro didn’t declare full independence until 2006! Some of these changes to new governments were violent: South Africa and the former Yugoslav countries, and some weren’t. But I can’t help thinking about how all of these countries, as they are, are younger than me. It’s an interesting experience, talking to people who are facing new journeys and creating new nations. I am optimistic and hope to visit again in another 20 years to see how far they’ve come! Will they have changed as much as they have in the last 20 years? 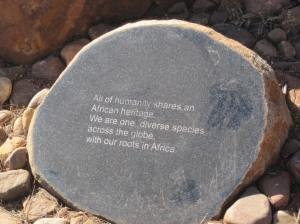 2. One thing that has stuck out is pretty depressing. No matter where we go, people always have found a way to hate or discriminate against other people in their past. It might be because of skin color, religion, or ethnicity. It doesn’t matter… People will always find a way to think they are superior, think that others are wrong, and worst of all, think that there are real reasons for killing. Some of this has been recent and some has been a little farther in the past, but it is an ever-present part of the discussion in any country we’ve visited. In South Africa, it was dramatic. Apartheid was a fully realized, institutional separation of people based on their skin color. People were actually categorized and carried IDs to that effect: white, indian, colored, or black. It was horrifying to see what people went through. Upon leaving Africa, we headed to Europe. Here we were faced with the history of WWII in our first countries: Poland and Czech Republic both housed horrible concentration/death camps. Jews (and others) faced discrimination in many of these places long before WWII as well. Moving into the former Yugoslav countries was even harder. We faced clear evidence of the wars of the 1990s. Places we visited had been utterly destroyed by people who all really share common roots. Visiting Bosnia Herzegovina was especially difficult as we saw the scars of the siege of Sarajevo (the longest siege in modern history) and heard about the ethnic genocide that occurred here. To say that it was extremely sobering is an understatement. 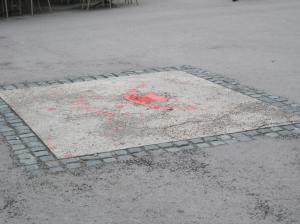 A “Sarajevo Rose,” a scar from the 1992-96 siege that have been covered in red resin so it is never forgotten

3. People go through a lot of horrible things. Despite the terrors associated with systematic discrimination, war, or even genocide, people find ways to rebuild and move on. I have been overwhelmed with the resiliency of the human spirit. I described above the horrors that many of the people in the countries we have visited have gone through. People lived through experiences that I can’t even imagine, let alone think that I could live through myself. But we haven’t seen anyone wallowing in despair. People have rebuilt, created new, beautiful places out of the old. They have moved forward and have done it with a smile. People are friendly, generous, and motivated. As I mentioned above, the beauty that I’ve seen and the amazing places I’ve visted have astounded me… These have occurred in the last 20 years! Imagine what they will do in the next! 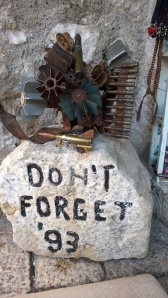 4. All of the above points have driven home something I have always known: the privilege I’ve been afforded growing up where and when I did. Most of these world altering events: complete revamping of your economic system, absolute new systems of government, war, sieges, and genocide have occurred during my lifetime. And for the most part, I knew very little about them. I was struck while watching the Miss Sarajevo video in Gallery 11/07/95. It was clear that the creator was using a little handheld video camera, racing through the bombed out buildings of a city under siege. This was in 1995… I was using a similar video camera to record and replay my gymnastic meets. I am unbelievably fortunate and that is something I should never, ever forget.

My thoughts I’d like to share are going to be much shallower than Della’s. But I will say that I agree with everything she has said!

1. It is very easy to travel as a native English-speaker. Everywhere that we have gone, it has been pretty easy to find someone that speaks English, or a sign written in English telling us what to do. We’ve tried to learn a few words of the local language, but usually only remember to use it as a hurried thanks. And, people always feel like they have to apologize to us if they don’t have perfect English! It’s pretty humbling to realize how much the rest of the world has to work to accommodate us.

2. I wish there was a drug for decision fatigue. As we discussed in the post we linked to at the beginning of this blog, being able to travel for a year in theory sounds pretty relaxing. No job to worry about, you can do whatever you want, etc. But, I think in many ways traveling is even more stressful. I miss having a standard routine where you basically know what you’re doing every day. While traveling, we are constantly having to make decisions about what to do, where to eat, where to stay, and so on. Making all of these decisions can be tiring. I can see the appeal of something like a cruise where all of these decisions are made for you! Especially the decisions around meal time. Trying to find a restaurant when you are hungry is the worst. 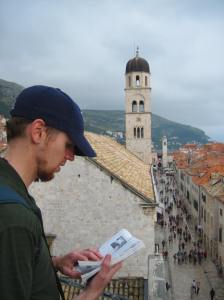 Should we eat at the restaurant that’s one block away with mixed reviews, or the one with two dollar signs that’s a mile away and has good reviews? Or should we just cook?? Maybe just ice cream for dinner?

3. Nothing makes me feel more at home in a place than finding a cheap restaurant with interesting food. Related to point #2, when we’ve been able to find someplace that we enjoy, it just makes me feel so much more comfortable because that is one less decision to make each day. I think this is probably the reason why Krakow is my favorite place that we have travelled to so far, since we found a restaurant there that served Polish food for cheap prices just a block away. 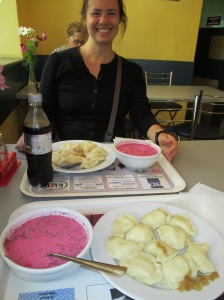 Found a nice place to eat!

4. I’m getting older. Staying in dorms has really hammered home this point. One Friday night in Budapest, we were content to just hang out in the common room and relax. All the 20-somethings looked at us like we were crazy for not having wild bar crawl plans. I guess we’re just getting to the point where that doesn’t have as much appeal. Although, we did enjoy the pub tour we did the very next night! 😉 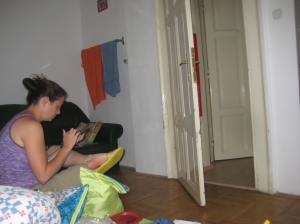 5. I miss home, but I’m not homesick. I miss being near family, to be there for important events. I miss having a house to come home to every day. I miss being able to go out and sample fun beers (I’ll tell you, the lagers here are getting a little repetitive…). I miss hanging out with friends (you may say you are living vicariously through our travels, but I am also living vicariously through your posts about what’s going on back home). But, don’t get me wrong… I’m not ready to come home. I am still enjoying seeing a new corner of the world every day, and finding out something new or seeing something I’ve never seen before. Thinking about home just gives me something to look forward to when we return!

One thought on “Thoughts on 100 days of Travel”