After several busy days in Istanbul, we took a short OnurAir flight to İzmir, where we rented a car at the airport. We immediately got on the road and headed the 45 minutes to Selçuk.

Attila’s Getaway – This is a beautiful getaway a couple of kilometers beyond the town of Selçuk. It was a very pleasant place to stay, where we able to get a double and triple room. What made it even better was that we met a friend from Denver who was staying there for awhile. It was amazing luck! She contacted us when she saw that we were in Turkey and we had already planned to head to her same location in just a few days. It was a lot of fun hanging out with her and Attila and their dogs around the campfire, roasting smores. Unfortunately, the stay ended a little bit unpleasantly. We had booked our rooms ahead via email through the Getaway’s website. But when it came time to pay, we were charged more than we were expecting and more than it clearly stated on the website. It was frustrating for us to experience this disagreement at the end of a nice stay. We are pleased to see that the rates on the website have since been changed to reflect what you will get charged when you stay there.

Making up some Smores

Playing with a cute puppy!

Ephesus – One of the main draws of the town of Selçuk is its proximity to the ancient city of Ephesus. According to Lonely Planet, it is the most complete classical metropolis in Europe. It started around the tenth century BC and was once part of the Ionian League. It also served as the Roman capital of Asia Minor. Its Temple of Artemis was the biggest on earth and one of the Seven Wonders of the Ancient World. Unfortunately, all that is left of that Temple is one solitary, lonely, rebuilt column.

There is a decent amount of the rest of the city left though. We got to the ruins by walking – there is a nice path from Attila’s to the upper entrance to the site. From the entrance, we waked down the marble-paved sacred way, stopping to examine ruins of different structures, such as temples, fountains, public baths and even a public lavatory. The most impressive piece of architecture is the restored facade of the Library of Celsus. There is also a large theater and agora near what used to be the harbor. (It has since been filled with silt; one of the reasons the city declined).

The columns of the State (Upper) Agora

Old terracotta piping from the city

The Temple of Hadrian

The facade of the Library of Celcus

For a separate admission fee, we chose to visit the recently excavated terrace houses. These well-preserved ruins gave us a glimpse of what the rich citizens lived like during the Roman era. Modern catwalks allowed us visitors to observe the fancy rooms of multiple dwellings, with nice marble, mosaics and frescoes as decoration. Another benefit of visiting the terrace houses is that most tour groups seem to bypass them, so you can enjoy moments of quiet contemplation rather than jostling for pictures. They are definitely worth the extra cost!

Closeup of a floor mural

Looking into one of the houses from above

Looking down at more floor murals

Basilica of St. John and Ayasuluk Fortress – The Basilica, built during the reign of Emperor Justinian, was inspired by a local connection to St. John who they say visited Ephesus two different times (the second time he was accompanied by the Virgin Mary). He supposedly wrote his gospel on the hill that basilica ruins are on. There is a tomb which housed St. John’s relics in this spot. (As an aside, some also say Virgin Mary spent the last years of her life near Ephesus. There is a ruined house nearby that is purported to be where she lived, though we did not make it there to visit). You continue through the ruins of the Basilica to head up to Ayasuluk Fortress. The fortress dates from the Byzantine and then Ottoman times. It afforded some nice views of the countryside!

Exploring the basilica with our friend from Denver

One of the remaining columns

What’s left of the basilica

The fortress on the hill above

The old mosque inside the fortress

Atop the fortress as the sun begins to set

Enjoying the remains of the day

Visit Şirince – Şirince is a small town mountain village that used to be populated by Greeks. We were excited because it supposedly would look a little like Berat and Gjirokaster in Albania. Unfortunately, were weren’t able to tell for sure because we visited in the evening after dark. However, it was a great time to sample some of the local wines for which the town is known for. Because we were there off-season, the town was extremely quiet at night. But, as we strolled some of the cobbled streets, we ran into a couple of men sitting on a bench and drinking a bottle of wine. They started a conversation and allowed us to share their wine. Our new friend, Osman, later took us to his favorite wine tasting bar. We enjoyed the free tasting of many unique fruit wines such as blackberry, apple, strawberry, blueberry and more, and then each got a glass. It was a very pleasant evening…

Wandering the empty streets of Sirinje

Chatting with our new friend Osman. The picture of Artemis shows what the famous statue of the godess in the temple in Selcuk looked like

Enjoying a glass of wine with our friend from Denver!

That is, until we left. We all piled back into the car (slightly crowded because our friend from Denver had joined us), and headed back down the steep mountain road. We were all surprised when a woman leapt out in front of the car. We were concerned that she needed help or a ride back down to Selçuk. We opened the window and she immediately just asked where we were from. At this point, after observing her move and smelling her breath, we knew that she was quite drunk. We answered that we were from the USA and she immediately starting screaming obscenities at us and telling us, as Americans, to get the f**k out of Turkey. She hurled her half-eaten bag of Cheetos (???) at us and started pounding on the closed windows. After a short moment of confusion we accelerated away from her. Strangely, she continued to scream at us and even chased after the car for about 150 m. Needless to say, this event disturbed us all greatly. It is the first time in our travels that we have experienced such hostility and we are unsure about her anger. She was clearly drunk but we did feel quite bad about the whole thing. We also ended up cleaning Cheetos out of the car for days…

Attila’s Getaway provided both breakfast and dinner. They were homecooked, filling, and delicious. We very much enjoyed the food! 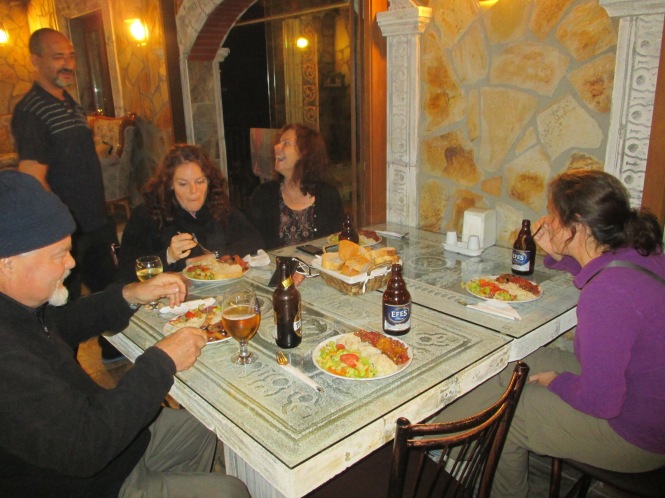 One of our great dinners at Attila’s

We enjoyed our time in Selçuk. Ephesus is definitely not be missed and Selçuk is a great base for visiting the ancient city. But it is worth it to stay for a few days so you can get a chance to see some of the other sights nearby. It is a beautiful location.

2 thoughts on “Selçuk, Turkey (near Ephesus)”