Eric and Della hadn’t known much about Kayaköy, but Wayne had found it on trip advisor. Those of you who know us well know that we have a special place in our hearts for ghost towns, so we knew we had to give it a try!

Kayaköy is an abandoned village near Fethiye, Turkey. The village is actually the remains of a town called Levissi, where a Greek population lived until Greece and Turkey exchanged populations after the Turkish War for Independence. Greek Christians living in Turkey were sent to Greece, and Turkish Muslims living in Greece were sent to Turkey. The village of Levissi was never re-populated and fell into ruins, becoming even more damaged after an earthquake in 1957. Today it is a protected site, and you can walk through the ruins of the town for a small fee.

We chose to head to the ruins even though we knew that there was a chance of rain. This was both awesome and horrible.

Awesome: The rain clouds added a whole new level of creepiness to the abandoned town. As we arrived and headed into town , the rain clouds got bigger and darker. Lightning began to strike in the distance and somehow there was literally continuous thunder. It was actually a truly unique experience!

The abandoned village of Kayakoy

One of the not so damaged churches. It was closed at our time of visit due to renovations

Walking through the site on our own. No one else dared to visit this rainy day.

You can still just see the barest hint of color on the walls of the houses.

The clouds are getting a little ominous

Wayne managed to catch a shot of the lightning!

Horrible: After the really cool threatening period, it actually did start to rain. And, when we say rain, we really mean pour. We tried to wait it out, hiding under remnants of walls, and in old doorways. Unfortunately, it didn’t stop and we managed to get ourselves absolutely and completely soaked. This was kinda fun for awhile, until we started to get cold and realized we had to walk all the way back to the car in the downpour, and then drive about 30 to 40 min back to our airbnb. 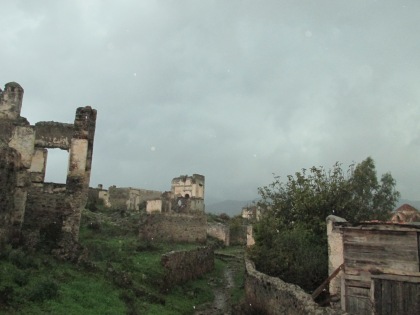 You can see some rain drops in this photo

We tried to stick it out

We hid in old doorways

Overall, we’re sort of glad that we got to visit Kayaköy in this weather because it did make it truly memorable. However, we were bummed that we didn’t get to explore the full extent of the site.