We mentioned in a post awhile back about how we find it a little strange that many of the showers in Europe were not what we were used to. The shower heads most often were about chest or waist level. Even if they were above your head, they were clearly meant to be taken down and used in your hand, because they were angled so that they would spray all over the bathroom. We also experienced a lot of showers without shower curtains or showers with no lips to prevent water from getting everywhere. There were also a fair amount of showers where the shower heads were just right over the toilet and you knew that you would just use the whole bathroom as your shower (see example below). 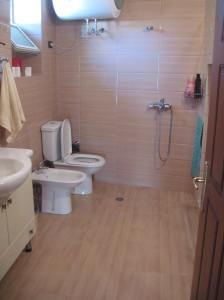 Notice the shower head just sitting on the wall!

This changed when we came back to Istanbul for the second time. In our Airbnb, we had a lovely shower with a stall and a shower head that stood tall above our heads! The water was even warm! It was excellent! (OK… Full disclosure: this was not the ONLY situation where we had a nice shower. But, this one was great AND we hadn’t written about it yet!) 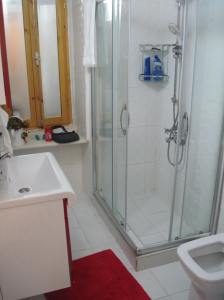 OK, so we didn’t get the whole shower in the picture… Oops. But take our word for it that it was good and the shower head was above our heads!

One thought on “Small Comforts: A Standing Shower”