During our time spent on our break with Eric’s family in Texas, we took a small three-night trip down with the family to the seaside city of Galveston. The two of us had made quick trips to Galveston multiple times while students at Rice University in nearby Houston, but on this visit we decided to approach it more like we were visiting a new place on our RTW trip. We even consulted Lonely Planet’s Texas guidebook!

We aren’t the only ones that know how to use “points” to travel cheaply! Eric’s family has a timeshare that gives them bonus points, and came up with the idea of using some of these points for a free stay at a property in Galveston. Our room at the Silverleaf Seaside Resort was quite spacious, with two bedrooms each with its own full bathroom, a living room with a sleeper couch and a full kitchen. There was decent access to the beach by crossing the street as well. The one downside of the resort is that it is located pretty far outside of town, so trips to see the sights and eat at restaurants had to be well-planned. 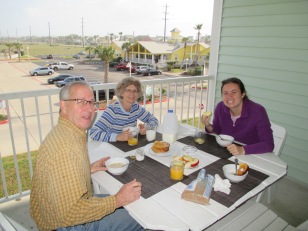 Enjoying breakfast on the large balcony 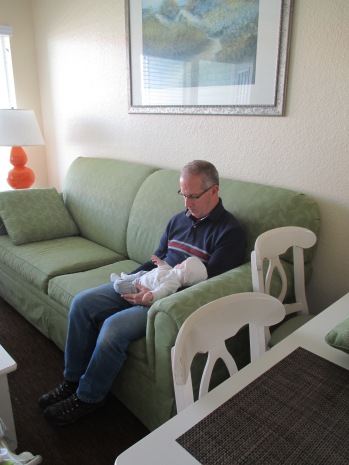 Hanging out in the living room

During the late 19th century, Galveston was the main port for Texas and one of the largest in the United States, and the city prospered. But, in 1900 a large hurricane hit and destroyed half the city. The town’s influence faded, but a lot of the structures from this period remain. Many of our activities involved visiting these locations.

Many of the historic structures are located on Broadway, the large boulevard through the center of town

The first location we visited was the Bishop’s Palace, a Victorian-style mansion built in 1893. You tour the two stories of the house open to the public using a self-guided audio tour. They have only left a little bit of furniture, but the interior is still quite magnificent. We especially enjoyed the Christmas decorations that were on display. 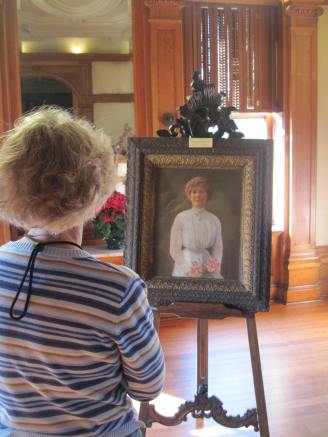 A portrait of Mrs. Gresham, the lady of the house

We also toured the Moody Mansion, another large house built in the early 1890s. The interior (which you can’t take pictures of for some reason) is still furnished with many of the items from the Moody family estate. The only way to visit the interior is on a guided tour.

The exterior of the Moody Mansion

During the heyday of Galveston, the main commercial district called The Strand was the hub of commercial activity. In modern times, this is still the center of tourist activity in town. We took a stroll through the district and admired the older buildings, but were a little disappointed to discover that many of the businesses seemed to be running on reduced hours in the winter low season. While in the area, we saw two films at the Pier 21 Theater: Galveston: Gateway to the Gulf, which described how Galveston had been a major immigration center in the late 19th century, and The Great Storm, which told the story of the hurricane of 1900 with some pretty chilling eyewitness testimony.

Galveston has also been hit by a few hurricanes in modern years. In 2008, Hurricane Ike hit the island and did a significant amount of damage, including killing over 40,000 trees. The Island came up with a fun way to remove these dead trees: turn them into artwork! We picked up a brochure at the visitor’s center for a Tree Sculpture Tour, which guided us through some of the different sculptures found within an area of a few blocks in the East End Historic District. We had a good time trying to spot the different people and creatures carved out of the trunks of the tree (with a chainsaw!). 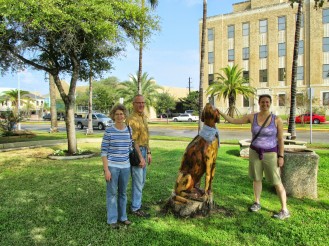 A Dalmatian sculpture near the fire station

Look closely at the branches to see the carvings

The Strand may not have been too alive in December, but there are other activities that are best during the winter months. One evening we took a trip to the Festival of Lights at Moody Gardens. The Moody Gardens complex (named after the same family as the Mansion) set up a mile long path filled with different light displays, accompanied by music and other sound effects. It was a pleasant reminder of our various trips to Zoo Lights back home in Denver.

The pyramids of Moddy Gardens illuminated for the event

Enjoying the lights with family 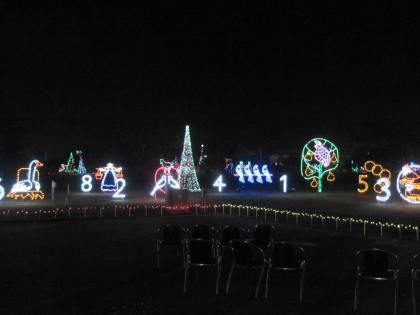 This display was synchronized to the audio of a Christmas song. Can you guess which one? 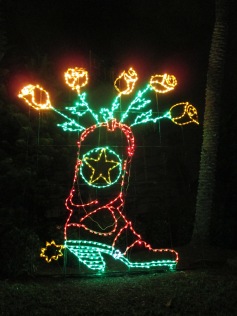 The Yellow Rose of Texas

It was too cold to swim, but we had to make sure to visit the beach while in Galveston. One of the afternoons we walked from the resort across the street to its beach access point.

Walking over the dunes to the beach

The Gulf of Mexico 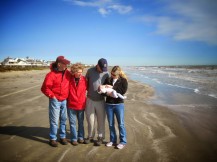 Babies can be cute 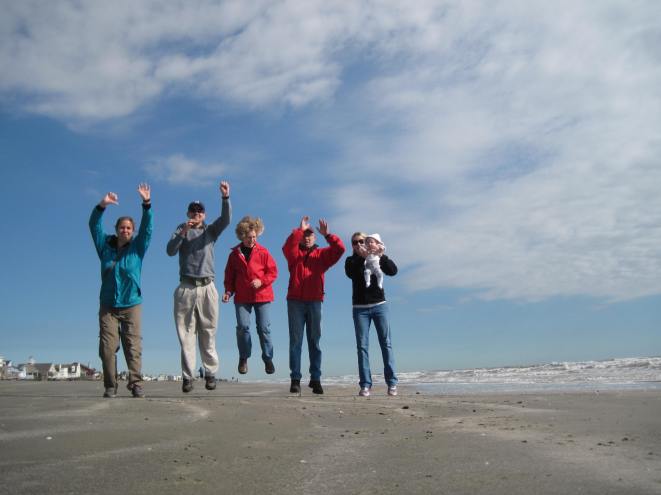 Then, on the way out of town we had to continue a tradition from college: walking out on the jetties that extend out from the sea wall protecting the main part of the city.

Looking out to the end of Eric’s favorite jetty

Watch your step over the uneven granitie

At the end of the jetty

One night the two of us also chose to do our college-era tradition in reverse: we took an evening road trip to visit friends in Houston. The top moment was definitely getting to catch up with our friends in various locales, including two different apartments and grabbing a drink at a Whole Foods (who knew that it had a bar inside?!).

We had a nice sunset when headed up to Houston

Because of the location of the resort out of town, we ended up eating out for lunch and cooking for dinner once we had returned home for the night. Our two big meals while in town we both at seafood places: Shrimp ‘N Stuff and Nick’s. Eric and his parents enjoyed sampling the fried shrimp (and other fried items) at both locations. Della is less of a seafood fan, but she was a good sport and managed to find something good to eat at both places. 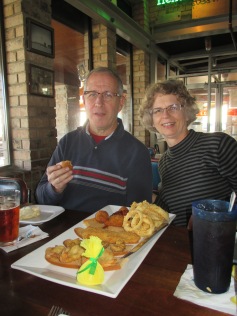 It was a lot of fun to get to visit Galveston as a tourist and see some of the things that we hadn’t seen on previous visits. It would have been nice if it was a little warmer so that we could have gone swimming, but we were still able to find plenty of fun things to do!