When planning our time through Laos, we waffled a bit on whether or not to go to Vang Vieng. On one hand, the town is situated on a crystal clear river in the middle of limestone mountains riddled with caves, making for a scenic and adventuresome way to break up the long bus ride to our next stop (Luang Prabang). On the other hand, Vang Vieng is known as the backpacker party central in Laos, with wild river parties and a downtown filled with cheap, uninspiring restaurants. Although, in 2012 they started to clean up the town a bit and supposedly the area is moving towards a calmer, more eco-tourism scene. So, with these factors in mind, we decided to spend a few days in town and reach our own conclusions.

We signed up for the “VIP” bus from Vientiane through our hotel there. The process of getting on board in the morning was certainly not “VIP” though. Our hotel insisted that we didn’t need a ticket, which seemed strange. It included minivan pickup for transport to the station, and when we were picked up the driver seemed to want some sort of proof. After some conversation they gave us a scribbled note that must have said 2 to Vang Vieng.

We piled into the minivan with some other travelers and settled in for the ride to the bus station. Then, in about two minutes, we reached a side street where we were told to get off and get on the buses that were parked there. After all the trouble squeezing in, we could have just walked there!

The “VIP” bus was much less fancy than the one in Myanmar. No assigned seats, so we just picked a couple out from some of the drab ones available. Luckily the person checking our “ticket” was the same one that picked us up in the minivan.

The ride itself turned out to not be too bad. It took about 4 hours with a break at a service station halfway. The road for the last part was a little curvy but not too bad. They dropped us off a little outside of the main town, but there was a free shuttle that took us into the heart of the city.

We stayed at the KL Guesthouse, which we found on Agoda and chose because it was the best-reviewed cheap option that had a private bathroom and included breakfast. The downside was that it was a ways out of the main part of town, but we thought that might be a hidden upside if we wanted to avoid loud music from bars late into the night.

Our room ended up being one half of a bungalow and was quite spacious. The staff at the reception was a little too laid-back, and the breakfast was basic, but ultimately we enjoyed our stay. The walk into town took about 20 minutes, which was maybe a little long, but we only did it once a day.

Green Discovery “Discover Vang Vieng” Tour – We wanted to see some of the caves around the area, and thought it would be easiest to go on a guided tour. The “Discover Vang Vieng” tour included multiple caves, a small trek and kayaking over a day, and was a little cheaper than advertised since multiple people had already signed up.

The first part of our tour was to visit various caves. We first did the “Elephant Cave” which was really more of an alcove with a Buddha statue and a formation that vaguely looks like an elephant. It was here that we really started to realize that we had a hard time understanding our main guide. He would interject a word that sounded like “lassa” throughout his sentences almost like an “um” or “you know,” and he had a somewhat thick accent, so we had to concentrate to get what he was trying to say. 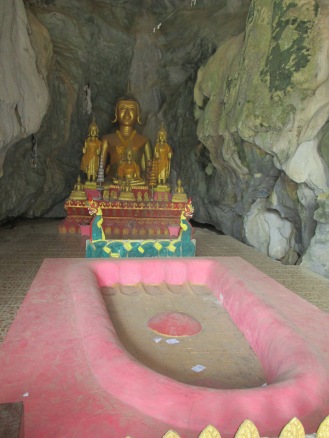 Buddha at entrance to cave

We next walked for about 10 minutes to another area and got ready to enter some serious caves, which meant we needed to put on head lamps. We first went into Tham Loup, which had some neat formations. We explored past a few large ones and then made a loop back. At one point our guide made the two of us do a tight squeeze and then told the others they could do the easy bypass!

We next went to the “Snail Cave,” Tham Hoi. There was a large Buddha statue at the entrance, and then for the most part it felt like a since long hallway with not as many interesting formations. We went pretty deep but then decided to turn around when we would have had to crawl through water.

some formations were decorated

Other formations had their own sparkle!

When we emerged one of the other guides had cooked us a nice lunch: fried rice wrapped in a banana leaf, meat and veggie skewers, a baguette and bananas.

After finishing the meal, we walked to the next cave, Tham Nam. This one is unique because water is running out of the mouth, so to get in it we got into tubes and then pulled ourselves along a rope strung along the cave for that purpose. We headed in for about 15 minutes, then headed back. On the way back we ran into large Korean tour groups which were making quite the racket.

We then did the “trekking” part of the tour, which was really just walking along an irrigation canal. This did provide nice views of the surrounding karsts and also lots of cute cows. There was also a dog leading the way that gave some nice entertainment. The walk ended through a Hmong village and then over a bridge where our truck was waiting. 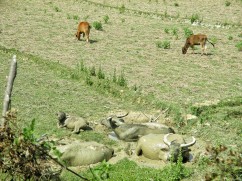 We rode for about 10 minutes to a drop off spot where we began our kayak journey. The two of us shared a kayak, with Eric in the front and Della in the back. The water was pretty shallow in places so we had to be careful not to hit rocks. The first stretch didn’t have many others on it. There was one rapid that we navigated successfully.

Our kayaks. We didn’t take any pics on the water… oops!

Then we hit the stretch where the party tubers were. The big thing for the party crowd is to rent a tube and spend the day going from bar to bar along the river. Again, this was supposedly much wilder before they started cracking down. Still, there was a stretch where there were drunk tubers all over the place. Definitely did not look like our scene. We tried to keep a wide berth so they wouldn’t splash us.

We didn’t actually take any pictures on the water… oops. But, we saw this sign where we got out. It shows a bit of what a party destination this place can be

The rest of the river was more filled with tubes and also many other kayakers. There were a few riffles but no major rapids. We both began to get sore from paddling, making us feel out of shape. We reached the take out at the south end of town, pulled our kayaks out of the water, and said goodbye.

Hang Out By the River – We spent the first part of our second day in Vang Vieng debating what to do. We could do the tubing thing, but we didn’t feel like the drunken parties would appeal to us. There was another recommended cave, but to get there would be via an expensive tuk-tuk or on rented bikes over a hot, dusty road. Inertia won out, and we ultimately settled on just hanging out by the river at a bar we had seen the previous day.

It definitely felt like spending a day at the beach. The seating at the bar was just different bungalows that provided relief from the sun. We took turns going for a quick dip – the water was pretty cold – and relaxed and read our books while sharing a Beerlao. The bar also had some speakers playing Western pop music, many of which we recognized and had fun singing along to. We hung around until just after sunset. 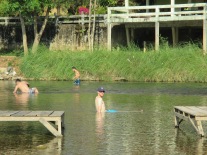 Then the hot air balloons appeared!

There are a lot of restaurants in town, but we had been warned that none of them really stood out. The first night we ate at one of Lonely Planet’s recommendations, a place called Kitchen that was affiliated with a boutique hotel. The most interesting dish here was some local sausage that Eric tried. (We have noticed that the different towns in Laos all seem to have their own sausage. For example, there is a well-known Luang Prabang sausage). 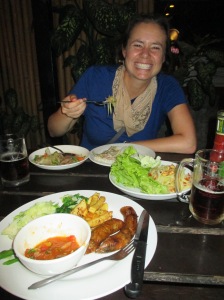 One holdover from the crazy backpacker party era is a very unique type of restaurant: a “Friends bar.” These places have lounge style seating all facing large TVs which are constantly playing reruns of the Friends tv show. There are multiple options in town, plus some that play Family Guy or South Park. We loved the show when it was on, so we decided that even though it might seem cliché we had to do it one night. The bar we chose was showing episodes from Season 7. We ended up staying through two and a half episodes. 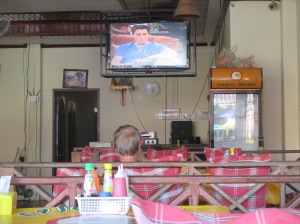 Our final night we wanted a nice view of sunset, so we went to a restaurant with a nice terrace view. Again the food choices were pretty standard, but we did enjoy the fading sunset colors. 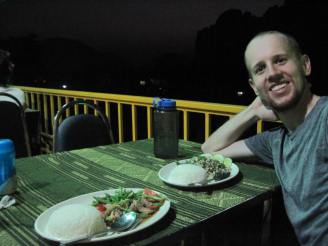 Dinner after the sun went down

We still aren’t completely sure how we felt about the Vang Vieng experience. On one hand, we enjoyed the natural beauty and our cave explorations. On the other hand, it still seemed like the town was not quite our scene, with a lot of people just there to get drunk. Service in shops and restaurants was also pretty gruff and disinterested, which is probably a byproduct of their typical clientele. Still, we think we are glad we stopped for a little while, and especially glad we broke up the bus ride… (to be continued)