We were quite excited for our final city, Luang Prabang, in part because of the Kuang Si Waterfalls, a site outside of town. We had been looking forward to seeing them for a long time, expecting them to remind us of our visit to Rio Celeste in Costa Rica and our cloudy-turned-lovely day at Plitvice Lakes last fall.

Almost every travel agent in town will sell you a ride to the waterfalls. We decided to have our guesthouse, Manichan, organize the trip for us. They have a normal driver that they use for trips like this. Our ride to the waterfall was via “songteauw,” which is kind of like a tuk-tuk but instead you are riding in the bed of a pickup truck on a bench (with a covering).

The road out to the waterfall was about 30 km, and a little steep and windy. It definitely took longer than we thought to make it out to the falls. We were driving for about 45 min and kept thinking about Della’s sister Dana and her friend Emma who somehow did this trip on bikes when they were here! Phew! Impressive!

Our first stop in the park was at a rescue center for the moon bears, named after the white crest on their chest. There were quite a few of them scattered through the various enclosures, and many were up and being playful. 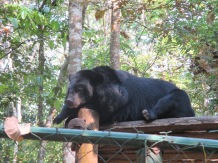 We then headed up and found the first of the lower pools of the waterfall. The water was crystal clear and going down some traventines- like Plitvice Lakes in many ways. Except this time we had great weather all the way through! Wayne did a few swims as we went up but the rest of us decided to wait.

Wayne checks it out

Wayne swims through the pools

At the base of the large falls we decided to follow advice from our guesthouse and take the stairs to the left side to reach the top – which seemed very far away! The more used path goes to the right of the falls. We were worried that we had heard wrong. Even this trail, which was supposedly better than other other according our guesthouse host, was pretty steep in places. But, when we reached the top and talked to other travelers who had come up the other way, it sounded like ours was better! At the top there wasn’t too much to do except wade out to somewhat close to the edge and admire the view.

climbing up to the top

Back at the bottom, we went to one of the pools and then all got in the water. It was pretty cold but ok once you got moving. Other people jumped off this tree into a deep spot, so we were inspired to do the same. Eric went first, then Wayne, and finally Della. 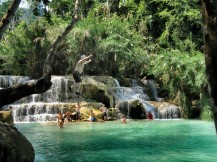 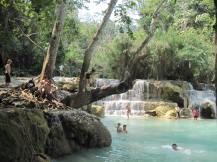 Della preparing for her jump… the jump itself wasn’t captured… 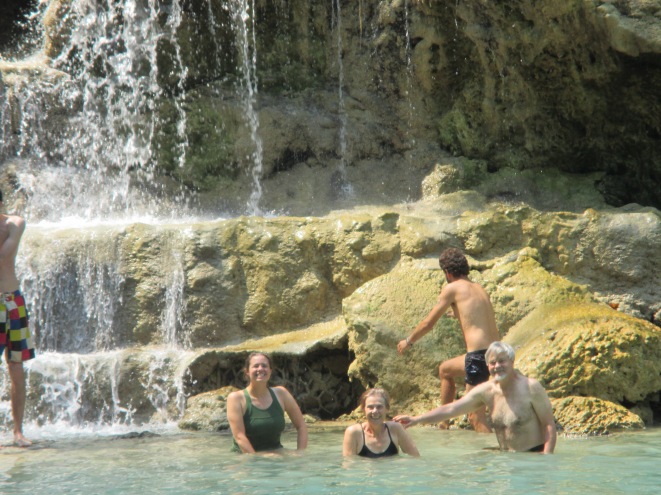 We were only supposed to stay for five hours (based on the price we paid for transport), so then we headed back out to find our ride home. The ride back seemed to go faster!

Kuang Si is beautiful and we think it is a must on your trip to Luang Prabang. We’re not sure we recommend taking a bike though!