Countries visited: 5 (Egypt, South Africa, Botswana, Zimbabwe, Namibia) – though two of those countries were visited for less than a day (12 hour layover in Cairo and Victoria Falls).

*Countries looked at: 2 (We stood across the border and reached our hands into Zambia on our Vic Falls trip, and we looked across the river into Angola at N’kwazi camp in the Caprivi Strip, Namibia)

Beds Slept In: 3 (One of those was our Self-Drive Safari tent which we set up 18 times!!)

~We both agree that our first top moment was coming across the “Hippo Pool” in Moremi Game Reserve on our way to Khwai campsite. We had been stressing about the deep sandy roads we had been driving, but when we found this secluded spot and climbed into the blind to observe a large pool with many hippos sleeping and feeding, all the stress melted away. We were also thrilled to see the hippos! 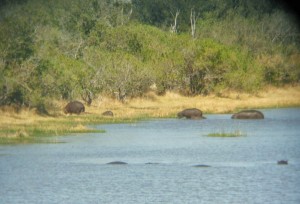 ~We were so thrilled that our plan to visit Victoria Falls came together smoothly and that we were taken in by a large family of South Africans during the day.

~We both loved Etosha National Park! One of our favorite times was our afternoon game drive there where we came across a waterhole where we observed several elephants drinking, bathing, and playing. When we arrived, one elephant was in the middle of the pool, up to his head, and he was rolling around, clearly reveling in the water. As we watched, another elephant joined the first and they played with each other, climbing on each other’s backs and entwining trunks. At first we thought that they were mating? But a little later a third, much smaller elephant joined in so we weren’t sure.

Runners up for Top Moments:

~Despite being exhausted after hours of deep sand driving, we decided to go out for an evening game drive at Savuti camp in Chobe National Park. We were so glad we did. We turned onto a side road which would take us to some rock paintings and we saw a car stopped ahead of us. They were observing a lion sleeping under a tree right next to the road! We were so thrilled to see our very first lion!

~After a week in the wilds of Botswana staying at wild campsites, driving on deep sandy roads, and meeting hyenas, we were excited to finally make it to Kasane, where we stayed at Chobe Safari Lodge. First we were so happy to have access to internet to be in contact with family and friends, but we also loved their riverside bar. We would sit there with our St. Louis Exports (a Botswana beer) and watch the sunset over the Chobe River. What made this extra special was the elephants feeding in the water on the other side.

~After two windy, miserable nights leading up to our camp at Sesriem in Namibia and a horrible, windy morning, we finally made it to Dead Vlei (see upcoming post) which was exactly what we had been waiting for the whole trip. Phew.

1. Eric’s watch is broken. The battery died. He is very sad.
2. Eric’s camera is almost broken. There was an unfortunate incident where it fell out of the car in the deep sand. Luckily, it was not on this list as lost which it was very nearly. But since that time, it hasn’t worked quite right.
3. New bar of soap purchased!

We have not made any changes to our bag contents. We only wish that we had some more warm clothing for this safari portion of the trip.

Books Read: (Have you read any of these??)