For almost all of the attractions to be visited on our trip, we can use adjectives like “exciting” or “fun” to describe them. However, there are some attractions where that’s not really the right adjective. The concentration camp at Auschwitz is one such location. We knew that it would be a tough place to visit, but important from a historical perspective.

The concentration camp is located in the Polish town of Oświęcim, just 50 km west of Krakow. There were tours of the site offered all around Krakow, but we decided to go on our own so we could keep our own pace. Buses leave for Oświęcim from the main Krakow bus station fairly regularly. We checked the timetable on this helpful website and caught an early morning bus. The bus dropped us off just a few minutes walk from the entrance to Auschwitz I.

The original section of the Auschwitz concentration camp was our first stop. The size of this camp is relatively small, so during the peak hours you are required to pay for a guided tour. We had read that it was possible to do it on our own, so we made sure to enter before the peak hours started at 10:00. This also meant that our entrance was free.

Auschwitz I, the original section of the concentration camp was intended primarily to house Polish political prisoners. This section mainly contains barracks that were used to house the prisoners who were forced to do work. (The mass extermination of Jewish and other peoples occurred later at the Birkenau section).

We spent quite a while walking through the grounds and going through various exhibitions housed in the former barracks.

The entrance. The words mean “Work is Freeing”…

Off the main track that the guided tours were taking, we found a series of museums dedicated to different populations whose members were prisoners at Auschwitz. We only had time for the Polish and Russian museums, but would definitely recommend to future visitors to search out any of the others as well if you have a particular interest. 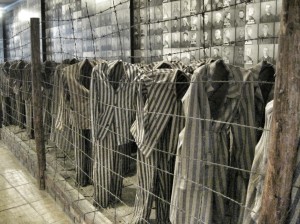 Display from the Polish museum

As Auschwitz I became more and more crowded, the Nazis decided to build another camp in the vicinity. Once Hitler decided to exterminate the Jewish people, this camp was turned into an extermination center.

Because of these reasons, the Birkenau camp is much more spread out, but the barracks are even more spartan than those found in Auschwitz I. The camp also contains the remains of five different gas chambers and crematoria – the Nazis destroyed them as they retreated.

There is a free shuttle from Auschwitz I to Auschwitz II. Since Auschwitz II is so large, there is no requirement for a guided tour at any time, so we were free to explore the grounds independently here as well.

Looking back towards the entrance to the camp. Prisoners would come through the gate in cattle cars and be processed where the people on the left were standing. Many would be sent straight to the gas chambers.

The ruins to the underground entrance of a gas chamber

The ruins of a crematorium

A pond where ashes from the crematorium were dumped

An international memorial to the victims

It’s hard to even describe what our emotions were after visiting these sights. The scale of the atrocities described is just hard to fathom. It was very difficult to see what we saw, but also not something that should be ignored.

A Tip for Future VIsitors: Backpacks are not allowed in either site. We were able to check our back at Auschwitz I, but not at II and had to improvise. Make sure to plan ahead accordingly if you normally travel with a day bag.

One thought on “Auschwitz, Poland”