Krakow was initially on our list to visit because of Auschwitz and the Wieliczka Salt Mine. Auschwitz is of course an infamous site, and we knew about the salt mine from a book we have at home that always helped inspire our travel (one of those 100 places you must see kind of books). The salt mine was in it, so we knew we had to see it! 😉 Krakow is much more than those things though. We found that we loved the old town. We spend 5 days there, and we could have spent many more!

Tramp Aparthostel – We found this hostel on hostelworld. It was spread out over many floors of an old building very close to the old town square. We were in an 6 person dorm. The benefits were that all of the beds were on the floor, a nice change from bunk beds and the room was very spacious. The hostel also provided a filling free breakfast! The other nice thing was that we ended up being the only 2 in our dorm for 2 nights which is always good. There was a pleasant common room upstairs where breakfast was served. Our main complaint was that they kept trying little ways to overcharge us. It was confusing because they kept trying and would back down very fast when we resisted. We weren’t sure whether they were just enforcing the “customer is always right” policy or whether they were trying to get us if we weren’t paying attention. Examples: we paid through hostelworld which says right there that all taxes and fees are included, but they tried to charge us extra taxes when we arrived. Then, when we decided to stay an extra night (a Thurs night) they asked us for a more money than the previous nights. They claimed it was the weekend rate… which started on Friday. We had to reiterate that we LEAVING on Fri, not staying on Friday. Both times they backed down immediately and we got our way, but it was weird. Also, unfortunately, there was not a communal vibe here due to the rooms being spread across multiple floors, so we didn’t make any connections.

Free Walking Tours – There are several different kinds of free walking tours offered in Krakow. We ended up doing two different tours in one day. They were both excellent, though we are not sure we recommend doing two in one day. Our legs and feet were exhausted by the end! The first was a tour of the Old Town Area. We looked at the many beautiful buildings on the large town square including 2 different churches and the cloth hall where merchants have been plying their wares for 1000 years! We then headed up to Florian’s Gate, part of the last remnant of the city walls, and the Barbican fortress. We also found time to head back to the square to listen to the bugle call which happens every hour and to wave at the bugler. The story says that in the old days the bugler warned of approaching enemies. When the Tatars attacked in the 1200s the bugler was shot through the throat in the middle of the melody and they still play that aborted melody 4 times (1 in each direction) on the hour (every hour- even at night) to commemorate! We also visited the Jagiellonian University which was attended by Copernicus (who was an economist as well as a scientist!) We saw the window where Pope John Paul II spoke to his Polish subjects and finally headed to the Wawel Castle complex where we learned a bit more about the history of kings in Poland. It was quite interesting actually, they would elect their king and it was most often a foreigner. The powerful magnates (nobility) never wanted a king who could become too powerful so they could retain control of Poland. 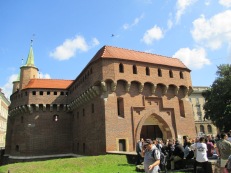 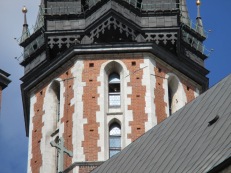 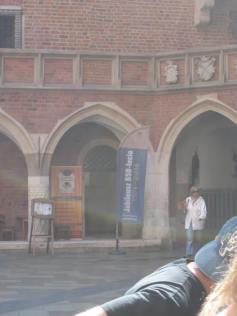 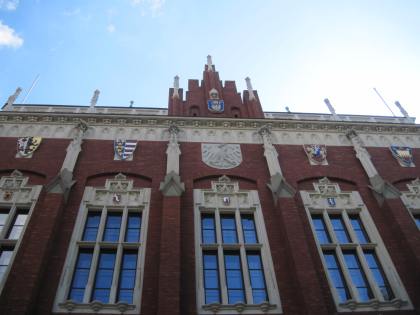 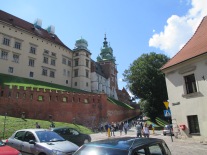 We actually did a second walking tour with our same guide later that afternoon. This one was of Kazimierz, the Jewish Quarter of Krakow. The tour started in the main square of the district, on Szeroka Street. We looked at the outside of three different synagogues and also heard about one of the famous residents who was a makeup mogul. Next we walked into an actual synagogue and heard a little about its history. Then, we stopped at the JCC and learned about how there really weren’t that many Jews (officially only 120) left in all of Krakow, since most were killed in WW2 or moved away afterwards. We then went to the square at Plac Nowy, where we took a break to look at the various stalls. Next stop was a walk through an alley that has been used to film many scenes of old town Polish life, most notably Schindler’s List. We then walked through a Christian church in the district – pretty gaudy inside, done in the Baroque style. From there we left Kazimierz and crossed over the Wisla River on a pedestrian bridge with some love locks into the area that was the Jewish ghetto during the war: Podgorze. Not much remains, except for a memorial with chairs in a main square and a fragment of the wall used to keep them in. The last stop was at Schindler’s Factory. Here our guide, Damien, explained that Schindler maybe was not as great of a person as the movie made him out to be. He said we should look into Irina Sendlerowa, who saved over 2000 children. After some research, we found that she is becoming more famous for her work in WWII and there are now several books written about her. 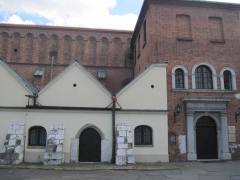 The first synagogue. Early synagogues were not allowed to be ornamented as the christian majority worried that beautiful synagogues would entice people to convert.

Images from Shindler’s List. Make note of the top one.

Does this look familiar?? 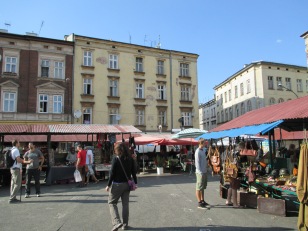 Baroque ornamentation in the christian church in the Jewish Quarter 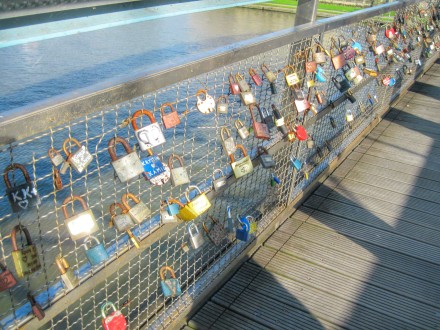 Memorial outside the Jewish Ghetto. Each chair represents 1000 people killed.

Wall fragment left of the ghetto

Wieliczka Salt Mine – Read about our excursion to the salt mine here!

Schindler Factory Museum – This was the only museum we visited in Krakow, and it was excellent! The permanent exhibits walk you through what happened in Krakow during the years 1939 – 45, during the Nazi occupation. The museum does fascinating things in each room, designed to make you understand the subject with all of your senses. The room for before the war has nice, warm lighting and happy music playing. It feels like sitting in a comfortable room, watching old family movies about Jewish life in Krakow. Then you enter a hall which describes when Germany attacked. It is black and gloomy with red lighting streaking across the walls, representing the fire, and the sounds of shooting and bombs is everywhere. Even the floor of each room played a big role: in the room describing the initial attack, the floor was uneven; in a room describing life for the Nazis, the floor was fancy swastika tiles; in a room for a concentration camp the floor was actual white gravel. The last room was quite interesting as well. To get into it, you walk through a dark room with a spongy floor (we aren’t quite sure of the interpretation). Then, you enter the “room of regrets”, which is stark white and covered with snippets of writing. Upon closer inspection, the snippets are quotes from people who did something (or didn’t do something) during the war period. The building was actually Schindler’s Factory (from Schindler’s List), so his office is preserved and there are a few rooms dedicated to him.

Wawel Castle Complex – Krakow boasts a beautiful castle complex. We unfortunately did not have time to explore it all. We did visit the Dragon’s Den which is a cave under the castle walls. We were a bit disappointed because we thought there would be “dragon’s” bones there, but there was not. The bones they talk about must be the ones hanging in front of the Cathedral. We did enjoy taking some pics in front of the gorgeous cathedral with the many chapels, different architecture for different kings. 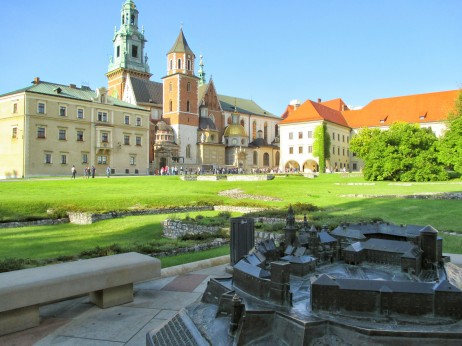 Our favorite restaurant (we went back 3 times!) was just a block outside our hostel and it was called the Milk Bar. Traditionally, a milk bar in Poland is a kind of cafeteria. It was designed to offer cheap but nourishing food. They were especially common through the communist era after WWII. Our milk bar is a modern take on this. It offered a cheap price for a meal of soup and entree. You had your choice of three different of each, which changed most days. They also had excellent pierogies which we enjoyed both boiled and fried!

We really liked Krakow! There were quite a few things to do, and the vibe was not nearly as hectic as Prague. The people were friendly, and prices for a tourist were quite reasonable. We’d definitely recommend it as a destination!