After saying goodbye to Slovakia, we headed south to Hungary. Our first stop was the capital city of Budapest.

Paprika Hostel – For our first few nights, we picked out this hostel online because the reviews made it seem like a low-key place (unlike a lot of other places in Budapest, who seem to be advertising how crazy they will be). We booked in a four-bed dorm room and shared with just one other person all three nights. The facilities were nice except another toilet would have been great), but we never quite clicked with the rest of the people staying here. 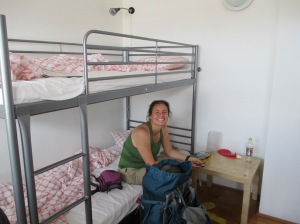 Pal’s Hostel – For our last two nights, we decided we wanted the comfort and privacy of our own room, so we found a private room in this place. Even though it calls itself a hostel, it actually feels more like small apartments. We had to share bathroom and kitchen facilities, but only with one other couple. We really enjoyed our stay in this spacious room – and the location right next to the main basilica was amazing as well!

Budapest Free Walking Tour – It’s basically become our standard practice to take a free walking tour of a city on our first day there to get a feel for it. In Budapest, there were a few different companies, but we went with the one that had the best reviews. This overview tour started on the Pest side (Budapest is actually the union of Buda on the west of the Danube and Pest on the east), where we saw a few different squares and the beautiful St. Stephen’s Basilica. We then crossed the Chain Bridge over into Buda. We climbed up the steps to the Royal Palace, and then the tour finished at Matthias Church. From here, we walked down on our own through the Fisherman’s Bastion scenic overlook and back over into Pest (where our hostel was).

View of Buda from the Pest side. That is the castle complex.

Rubbing his belly for luck

We crossed the Chain Bridge and are climbing the hill to the castle. Looking back at Pest.

View of Pest from the castle. The beautiful Parliament building is in view.

View of Parliament from Fisherman’s Bastion

Free Pub Tour – Budapest is known for its nightlife, so we decided to get a little crazy and join a tour of some of the different watering holes. The free walking tour company offers a free pub tour – they make sure to emphasize that it is a tour, and not a pub crawl where the point is just to get drunk. A guide led us to three different places, and at each one we got a free shot! The last stop on the tour was one of Budapest’s famous “ruin bars” – an abandoned building that has been turned into a large bar (and usually with random decorations). We had so much fun that after the our was over, some of the group even went on to another ruin bar!

Free Communism Walking Tour – We definitely love our free walking tours! The tour company also offered a special tour that was a little different than the overview. It was less about seeing sights and more about hearing the stories of what life was like in Budapest during the Communist regime (with appropriate backdrops). We felt like we learned a lot and would highly recommend this!

A communist era building- notice the not so beautiful architecture

In the beautiful square with the St. Stephan’s Basi

Bullet holes in the sides of buildings left over from the 1956 Revolution. This revolution ultimately failed and Budapest was ruined by tanks.

This is one of the few remaining soviet memorials left: a monument to the soldiers who died liberating Hungary. Some say “liberating” because this led to communism in Hungary

Our explained that the thought it was significant that the one remaining memorial was right outside the American embassy!

Our guide also explained that the thought this statue was politically related. Right on the other side there is a large statue of President Reagan. Perhaps the US was reponding?

Our guide showed us the map that students learned from during communism. Most of the west doesn’t exist!

Our guide said this was a communist version of monopoly.

Margaret Island Fountain Show – Our hostel gave us a tip that every night at 9, the big fountain on the southern end of Margaret Island puts on a light, music and water show. We grabbed a bottle of wine and headed over there. We were definitely impressed with the hour-long spectacle. This also gave us a good view point of the Parliament and Castle by night!

Central Market Hall – On our own, we walked down to this giant market housed in a pretty old building. The market was closing, so we didn’t have time to do much shopping, but we did manage to grab a lángos, which is basically just fried dough topped with a variety of things. We overheard someone say that the traditional topping was just cheese and sour cream, so we went with that.

Walk Around Parliament – Also on our own, we walked around the massive and impressive Hungarian Parliament building. We had thought about doing a tour of the inside, but it is actually pretty expensive. Also near the Parliament on the Danube we found a memorial to the Jews who in 1944-45 were killed on that spot so that their bodies would be washed away in the river. The shoes symbolize the fact that they were often ordered to take off their shoes beforehand.

Monument on the River

Monument on the River

Szechenyi Baths – One other thing that Budapest is known for is its baths. There are many springs in the area surrounding Budapest, and these are often used to create public baths. We went to the largest at Szechenyi. We spent a whole day exploring the different thermal pools, saunas and outdoor pools. Definitely very relaxing!

Compared to other cities we have been to, we actually found it quite hard to find traditional local food in this city! Most of our meals were not Hungarian. We had Thai food, Turkish kebabs, and even Mexican food! On our last night we did finally eat at one place that offered a multi-course menu of Hungarian specialties.