We have been looking forward to going to Eger for a long time! We knew that we needed to find time to visit this smaller Hungarian town.

Agria Retur Panzio – This nice pension was a little bit far from the train station so we had to lug our bags all the way through Old Town to get there. However, we were glad that we stayed here. We had a pretty sizable room with a private bathroom. There was a shared kitchen and meal area that was quite pleasant. We were only a few minutes walk from Old Town and the town Minaret was practically right outside our door!  The shower was unique though.

Valley of the Beautiful Women – This is why we traveled to Eger! Just over the hill, about a 25 min walk from Old Town, is the Valley of Beautiful Women. We’re not sure why the name, especially because we saw almost no one in our time in the valley. It was a miserably rainy day. However, it was still quite enjoyable because the reason you visit here is because it is full of about 50 wine cellars, all right next to each other. Tastes are free and glasses were as reasonable as 100 forint (about $0.50)! We really enjoyed striking up a conversation with a bored Hungarian working in the first cellar. We chatted about wine, Hungary, language, and her life. We also enjoyed trying the Eger special wine: Egri Bikaver or Bull’s Blood. The wine gets its name because in 1552, the people of Eger withstood a siege by the Ottoman Empire for a month. 2000 men from Eger against 100,000. They held! The king Istvan Dobo helped his troops by giving them wine which stained their beards red. This lead to rumors through the Turkish army that the men of Eger were so strong and vicious because they were drinking the blood of bulls! Every cellar has their own variant of this famous Eger wine. They also will fill up a plastic bottle of wine for cheap prices. We filled our 1 liter nalgene bottle of our favorite wine for only 500 forint (a little over $2.00!!) There are many cellars to try, but the rain and the alcohol caused us to only get to 3. We wish we lived close by cause we would go back regularly!

Our favorite wine cellar, where we chatted with our new friend

Super excited that we found the exact same cellar that we featured in our fast forward Friday!

Our Nalgene full of yummy wine!

Eger Castle – As we mentioned, Eger is famous for withstanding a siege from the Turks. The castle is beautiful. There are a lot of things to do in the castle, a few museums, etc. However, we were mostly interested in the views. Also, we only had a small window at the end of a day when it wasn’t pouring. You do have to pay to walk the grounds, so we spent some time exploring the walls and enjoying the views. You can see the ruins of the first cathedral which was built on the same hill around 1000 AD. Eger exists because it grew around this cathedral.

The original ruins from the hill. Eger was built around these!

Climb the Minaret
So, we talked about how Eger withstood the siege from the Turks. It was amazing and heroic, and, understandably, Eger is very proud of this point of its history. Unfortunately, the first siege was in 1552. The Turks came back in 1596, and this time Eger did not hold out. Eger was under Turkish rule for about 100 years. The minaret is a remnant from this time. It is an amazingly narrow, tall tower. There is nothing to do but climb the tower. We didn’t count, but our Lonely Planet says that there are 97 stairs in this narrow staircase. It winds up to the top and you almost have to crawl up on your hands and knees to contort your body through the narrow passage. Once on the viewing platform, the only thing you can do is shuffle sideways with your back to the tower. Della couldn’t even fit up there with her backpack. We did have some lovely views of the town and castle. The sun even decided to make an appearance!

The minaret up close

Contorting our way up the stairs

Up on the top

Holding on cause it was scary

The platform, just barely wider than our feet

Eger Basilica
Eger boasts the 2nd largest Basilica in the country, and it was huge. We chose not to pay for the special, daily organ concert, but we did find time to enter later. It is beautiful! 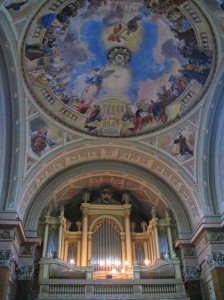 Inside the Eger Basilica

City Under the City
The other cool thing about the Basilica is that you can enter the City Under the City right outside. This is actually a network of tunnels that functioned as the archbishop’s enormous wine cellar. This was from the days when church taxes were paid in wine! We did a tour here as it is the only way to see them and it was in Hungarian unfortunately. Though they did give us a nice English guide which gave us information about each of the things our guide was talking about. The only thing we missed was understanding the jokes and being able to ask questions. 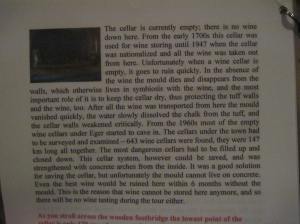 An explanation of mold and how it is necessary for wine storage?

City under the City. Not any real wine. 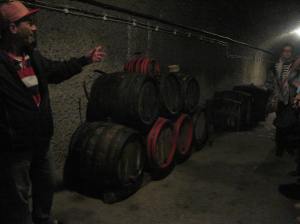 Exit Point Game – So, we had heard about these Escape Room games in Budapest. The premise is simple: They lock you in a room and you have 60 min to figure out how to escape. You will use clues within the room, logic, and other tricks to open locks, solve riddles, and unlock doors. It’s basically a chance for you to channel your inner Indiana Jones. We had known that we wanted to try one of these games, but couldn’t quite get around to figuring it out in Budapest. But we were quite excited to see that one of the companies had recently expanded to Eger! We walked by their office in town, which was only a few min away from our pension. We had no trouble scheduling an appointment because they had just opened 2 weeks ago. There is a hint button, which we never used. However, you are on video the entire time so the woman watching us gave us a few unsolicited hints when she could see we were stuck. We got out right before our 60 min were up. However, we do believe that if had a bit longer, we could have figured it out with no hints! It was a blast! 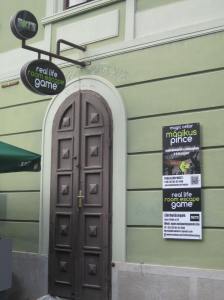 We found that a lot of places in Eger (also in Budapest) offered a special “daily menu.” This menu normally got you a soup and some sort of meal. We were excited that these typically cost about 900 forint (less than $4.00)! We ate at a couple of different restaurants with this deal. The food wasn’t particularly memorable, but it was tasty!

We were certainly glad that we went a little bit off the main tourist track to visit Eger. It was a beautiful old town. Unfortunately, a bit of the beauty was marred because they were completely redoing the main old town square.  Despite this, there is plenty of things to do to occupy your time for a couple of days. We wish we could have stayed longer. We also wish we could have been more efficient, however, the bad, rainy weather made some of the potential sightseeing unpleasant. Overall, we really enjoyed Eger and wish we could do it again!