Our final stop in the Peloponnese peninsula of Greece was the town of Nafplio. We chose to visit here because it made a good base to visit Mycenae and Epidavros and because it is a pretty interesting and historic town in its own right.

Since we were staying for five nights, we wanted to stay someplace that would allow us to cook a few meals on our own. So, even though it was a little more expensive than we are used to staying, we booked a nice studio apartment through Airbnb. It was nice and spacious and was located not too far from the Old Town. 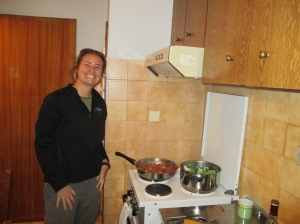 Taking advantage of having our own kitchen!

Walking Tour of Old Town – As we said, Nafplio has quite a bit of interesting history. Our first day in town, we spent a few hours following the Rick Steves self-guided walking tour. This started out near the harbor, where we could admire the small fortress outside the harbor and also the large Palamidi Fortress looming above the town, both built by the Venetians during their occupation of the town.

The tour took us through the main square, called Syntagma Square. This square is interesting for the variety of different influences you can see as reflected in the buildings: the old Venetian arsenal,a bank that is decorated like a Minoan palace, Neoclassical buildings from Nafplio’s heyday as the first capital of Greece after independence from the Ottoman Empire, and former mosques from the Ottoman period itself.

The walk continued on through the pedestrian-only streets of the Old Town. We felt a bit like we were back in Croatia, since that was the last time that we had been in cities with that feature. But, we could definitely tell we were in Greece, since we passed a few different Greek Orthodox churches. The most interesting church that was passed was noteworthy because the first president of Greece (after its independence in 1828) was assassinated outside of it in 1831.

The Venetian fortress on an island in the harbor

Syntagma Square with the Venetian Armory at one end

The bank with Minoan-style columns

Climb Up Palamidi Fortress – We took an afternoon to visit the largest of Nafplio’s Venetian fortresses, which doesn’t have much in it but provides excellent views of the surrounding area. You can take a taxi up to the fortress at the top of the hill, but we decided to climb the steps. We didn’t start heading up until 2:00… and were disheartened when we saw a sign at the base that the fortress was closing at 3:00! We raced up the stairs and made it at about 2:30. The good news was that admission was free since it was the first Sunday of the month. We just had time to explore one of the seven bastions, but were quite impressed with the structure. (We think they should film Game of Thrones here!) We were kicked out at 3:00, but we found a piece of the walls that was outside the gates to sit on, and read our books while looking down over the Old Town.

Climbing up to the fortress

The bastion we explored

Coastal Walk – Another simple activity we chose to do was to walk along the coast. This was broken up into two sections: first we left from Old Town and walked along the western edge of the peninsula to the pebbly Arvanitia Beach. From this beach, we then took a gravel path another few kilometers, going further southeast along the coast. We headed back into town as the sun set.

Looking back toward town.

We enjoyed cooking in our Airbnb so much that we ended up just cooking for ourselves every night! We made some interesting pasta and rice dishes. We also enjoyed appetizers of tzatziki and pita bread on multiple nights. 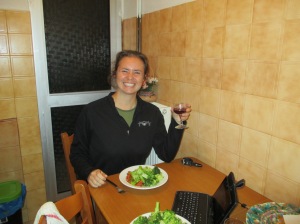 Enjoying a nice meal in our apartment