This edition will cover our top 10 favorite castles/fortresses around the world. These are not in order of preference, instead they are in the order in which we visited them.

The Castle of Good Hope in Cape Town was the first permanent European settlement in South Africa, built by the Dutch East India Company in the 1660s. It is quite beautiful, with yellow walls and a star shape. Entrance includes a tour which we quite enjoyed. We also were fortunate to see the “Key Ceremony” at noon.

This building doesn’t quite look like a fairy tale castle, but was fun to explore! It’s free to walk around the grounds, but to go inside you do have to pay for a guided tour. There are a few different tour options; we chose the one that took us through Renaissance and Baroque era rooms (no pictures allowed inside, unfortunately). We also really enjoyed strolling through at sunset. You can get quite high in the castle which makes for lovely views over the city.

As you approach the town of Spišské Podhradie by bus, you are immediately struck by the enormous size and majesty of Spiš Castle on the hill above town. The entrance fee includes the use of an audio guide (free as long as you returned it within 90 minutes). We walked through the castle and listened to the stories on the guide. There actually wasn’t very much left of the castle. The royals stopped living in it in the early 18th century, and then in the late 18th century it burned down. What’s left has more of the feel of an archaeological site than the other castles we visited. It was built in the 12th century and went through many phases of construction and purpose. It has 3 baileys, which we learned were walls to protect itself. It is really more of a fortress. It went through many owners, but always was an imposing view over the valleys nearby.  The grounds of the castle are massive: there are multiple courtyards within the complex. After doing the audio tour, we spent some time just soaking in the ambiance from different places within the structure. The view was great as well!

This palace takes up a good portion of old town Split. It was built for the retirement of the emperor of the Roman empire around 300 AD. There are an interesting mix of original Roman structures and other houses and shops built during the next several centuries after villagers moved inside the walls following the Slavic invasion in 700 AD. It was awesome to see that the area had been inhabited for so long, with people still living and working inside.

Diocletian’s Palace is in the background, with all the modern development now surrounding it

Kotor has a very impressive defense system. Not only does it have thick walls to protect from attacks from the sea, it also has a series of walls running up the hill behind the Old Town that protect from attacks by land. Today, you can pay a small fee to hike up the old walls all the way to a fort at the very top. We took advantage of this one evening, and had great views over the bay as the sun set. 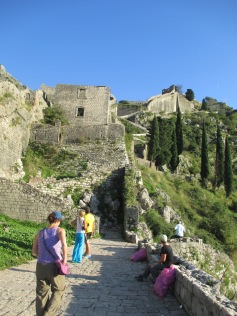 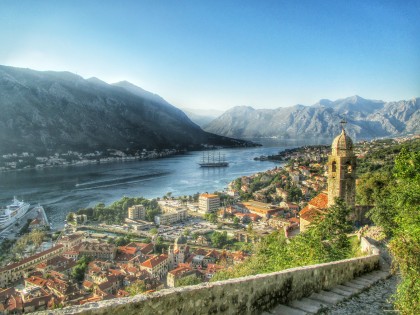 The castle at Gjirokaster offered sweeping views of the valley, an eerie collection of old tanks from WWII, and even a tomb of Bektashi, the founder of the Bektashi sect. It also had an old US Air Force jet that was shot down during communism that was just there, ready to play on. It was nice to spend time in the castle where we didn’t see a lot of other tourists. There was also a museum of more old armory which we did not choose to visit. The views of valley and neighboring mountains were absolutely stunning.

We took an afternoon to visit the largest of Nafplio’s Venetian fortresses, which doesn’t have much in it but provides excellent views of the surrounding area. You can take a taxi up to the fortress at the top of the hill, but we decided to climb the steps. We didn’t start heading up until 2:00… and were disheartened when we saw a sign at the base that the fortress was closing at 3:00! We raced up the stairs and made it at about 2:30. The good news was that admission was free since it was the first Sunday of the month. We just had time to explore one of the seven bastions, but were quite impressed with the structure. (We think they should film Game of Thrones here!) We were kicked out at 3:00 and regret that we weren’t able to spend more time in the fortress, but we found a piece of the walls that was outside the gates to sit on, and read our books while looking down over the Old Town. It was a great place to relax and then later enjoy the sunset.

Topkapi Palace in Istanbul was the home of the Ottoman sultan from 1465 to 1856. The palace has four different courtyards and many exquisitely decorated rooms. We toured through all of the areas open to the public, including the harem which required an extra ticket. The grounds were expansive and, despite sort of bad weather, we enjoyed exploring most of the nooks and crannies. We were particularly excited here because it finally happened!! – Someone recognized Eric’s Rice baseball hat. We met a current Rice student (Jones College) who was studying abroad. How fun!

We spent a hot and crowded day in Bangkok exploring the ceremonial home of the Thai monarchy, the Grand Palace. We paid our steep (500 baht = $15) entrance fee and headed into the first part, Wat Phra Kaew, a.k.a.the Temple of the Emerald Buddha. We first explored the colorful chedis, then braced ourselves and dove into the big crowds squeezing in to see the Emerald Buddha itself. The statue was pretty, but far away and a little small, so we didn’t linger. We left the wat and then walked through the grounds of the palace. This was formerly the residence of the Thai royalty, and there are many fancy buildings that show a mix of Thai and Western architectural styles. Most are closed off to the public, but a few of the throne halls are open, so we wandered through them to see the splendor and take a brief respite from the heat. The splendor of the buildings with colors and sparkles is hard to beat. We also followed a tip from Wayne and Peggy, who had visited the previous day, and finished our visit at the slightly out of the way Queen Sirikit Museum of Textiles, which ended making our top 10 favorite museums list.

The Vietnamese city of Hue was the seat of the Nguyen dynasty and thus the capital of Vietnam from 1802 to 1945. The main remnant of this ruling period is the ruins of the Imperial City, the home of the emperors. It is surrounded by a large wall, and then within the Citadel is another set of walls and the impressive Ngo Mon Gateway into the Imperial Enclosure, where all of the main activities took place. From there we explored the large site which had been largely destroyed during the French and American wars. However, there is a lot of ongoing restoration work. We explored the Thai Hoa Palace which was used for official receptions and important ceremonies before heading to the Hall of the Mandarins. The Forbidden Purple City was once reserved for the personal use  and residence of the emperor, but there is not much left now. Some of the the most beautiful parts of the entire enclosure were the Truong San Residence and the Dien Tho Residence for the wives and mothers of the emperor. 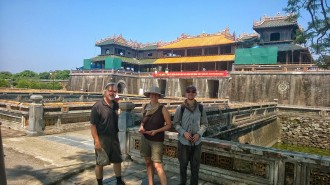 The Ngo Mon Gate (under renovation), the entrance to the Imperial Enclosure

3 thoughts on “So, What Were Our Favorite… Castles?!”