We visited Prince Edward Island (PEI) during our 2 week road trip of New England and Canada. We rented a car in Boston, explored Maine, and then spend some fun days along the Bay of Fundy before arriving in PEI.

We arrived in PEI after a long day exploring Fundy National Park. We were all hungry and tired so as soon as we crossed the Confederation Bridge and arrived in the town of Borden-Carleton we pulled off to eat. We had been excited to try Cows Ice Cream because we had heard so much about it so we just ended up eating Subway because they were in the same building. We arrived in our accommodations in Summerside in the later evening and pretty much went right to bed.

Summerside is a cute town! We drove to town center and headed into the visitor center which was right on the harbor. There was a harbor walk and a lot of shops, but it was pretty early and it was dead while we were there. We had seen online that there was a newly founded historic walk that went through town starting at the Lefurgey House. It was strange that the visitor center didn’t actually have the walking tour brochure, but once we made our way to the Lefurgy House we were able to get a brochure and some good information. The house belonged to John E. Lefurgey who was a leading Summerside shipbuilder, produce dealer and politician. It was sold by one of his sons, but then repurchased by his granddaughter Wanda Wyatt who helped turn it into a sort of cultural center. The tour brochure let us to several historic buildings and monuments in the town. It was a nice way to spend an hour and a half in the morning before Kiddo’s morning nap. 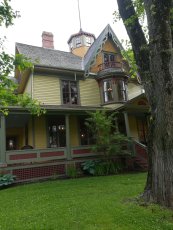 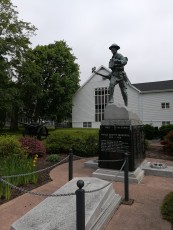 Monument to the local soldiers in WWI

We started our day in Charlottetown, the capital and largest city of PEI, at the Founder’s Court Visitor Center where we got some information on walking routes to see the best parts of the city.

We explored Charlottetown using a combination of a Heritage Walk and a scavenger hunt for Eckhart the Mouse. Sprinkled throughout town, there are 9 statues of Eckhart the mouse who is, apparently, a beloved storybook character. They are in historic or culturally significant places and the tour gives you a little info at each one. We enjoyed searching for the little statues and could see that Kiddo would have loved this way to see the city if he was a bit older. There was also another kid-friendly scavenger hunt type tour of the city where you find different animal statues that starts at the Visitor Center. 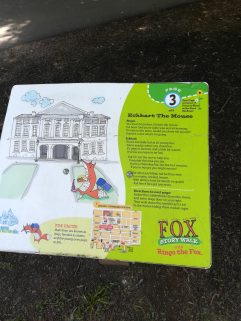 Can you spot the Eckhart statue on the windowsill?

Our tour included Founders Hall which is where the delegates of the Charlottetown Conference arrived in Charlottetown in 1864. The conference was pretty important in the history of Canada because it would eventually lead to the Confederation of New Brunswick, Prince Edward Island, and the Province of Canada (which contained what became Ontario and Quebec) into the Federation of Canada. We visited the Province House where many meetings of the delegates took place. We also visited St. Dunstan’s Basilica which is one of the largest buildings of its kind in Eastern Canada.

We did a brief break in the middle of the day for Kiddo to play in the park. He’s getting really good at climbing!

We ended the day walking along the waterfront where we stopped at another Cows to pick up ice cream and raspberry cordial!

This was the reason we came to PEI! Della had been a fan of Anne of Green Gables as a child, both the books and the CBC TV movie. We’re a little embarrassed because we initially kind of misunderstood what the Green Gables House was. Della had thought it was the location where they did some of the filming for the movie and she was very pumped to see it. (Again, she has wanted to visit PEI since she was a kid specifically because of that film!) However, that it not really what the Green Gables house on PEI is at all.

Lucy Maud Montgomery, the author of Anne of Green Gables, lived on PEI near the town of Cavendish. Her parents died/left when she was young, so she grew up with her grandparents. Her grandparents’ cousins lived in a house with green gables that inspired her to write the Anne of Green Gables series. There were other things there that inspired the locations in Anne’s adventures like the the Haunted Woods Trail and Lover’s Lane. There is also a real lake that becomes “The Lake of Shining Waters” in the stories. So, we figured this out – a little sheepishly – and then thoroughly enjoyed our time. The whole area is now a national historic site. When we entered there was a very short but enjoyable museum about Lucy Maud Montgomery’s life.

Then we toured the inside of “Green Gables.” They have set it up as if it were from the book so there is a room dedicated to Anne and then one for Matthew and one for Marilla.

That’s Anne in the background!

After exploring there, and taking a picture with Anne herself, we headed off to walk the Haunted Woods Trail. We didn’t find it very scary, and Kiddo walked almost the whole thing himself. This, of course, made it go quite slowly.

We then eventually got him to calm down and take a bit of a nap in his stroller while we did the Lovers Lane trail and then watched another short video about the life of the author. 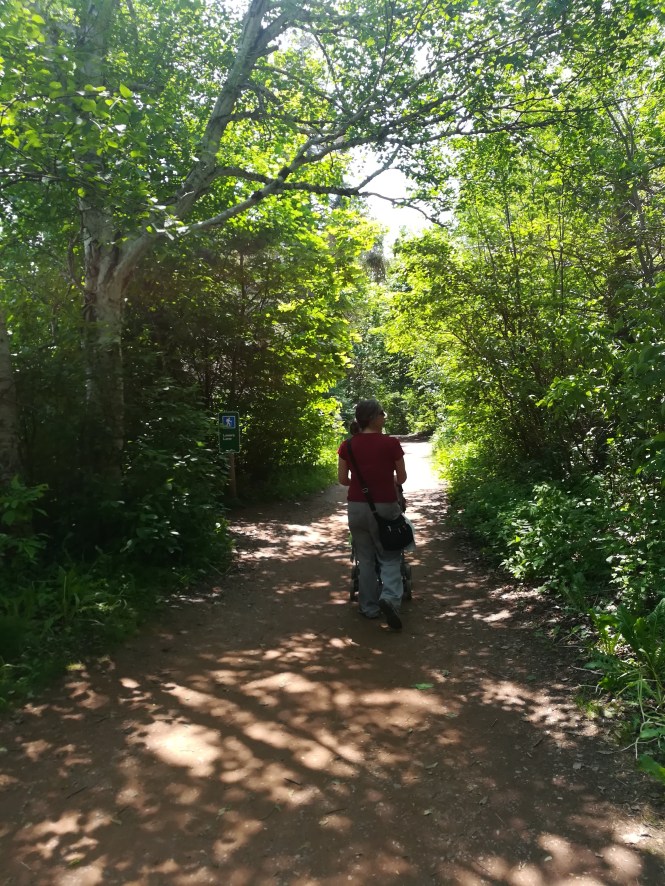 Near the Green Gables House, they have set up a representation of the fictional town of Avonlea (from the books) which was mostly a tourist trap.  We intended to visit later in the day, but ended up running out of time.

After thoroughly exploring the Green Gables House, we decided to head to the coast near Cavendish which inspired Lucy Maud Montgomery to write many poems. We entered PEI National Park along the northern shore. We stopped briefly at an overlook where we could see the gorgeous red sand cliffs.

We had been planning on visiting Cavendish Beach and we saw that we could walk there from the overlook. It said it was a short walk and we knew it would be beautiful, so we set off. Upon reflection, we really wish we had better prepared for this. We didn’t bring the stroller OR the carrier, so we ended up just carrying Kiddo. It was too far for that to be comfortable. The walk was lovely- taking us through the dunes, near the coast, and across the Lake of Shining Waters. 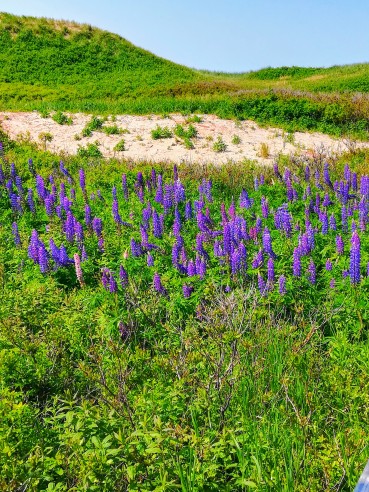 We hadn’t expected Cavendish Beach to be so crowded! In our head, we thought, why would anyone swim? The water is so cold! However, we were sorely mistaken. We made our way down to the beach and sat for a little bit. Kiddo really enjoyed digging in the sand… and getting it ALL OVER himself- like into every nook and cranny. We also let him put his toes in the water. However, we weren’t really prepared to swim so we had to cut the trip short. We wanted to change him completely before the semi long drive back to Summerside and it was getting late. Eric ran back to get the car while Della tried to give Kiddo a shower and get him changed without getting too wet herself.

Throughout our 2 days in PEI, we ended up doing most of the Central Coastal Drive.  We did the southern Red Sands Shore on our way back from Charlottetown to Summerside and did some of the Green Gables Shore on our day exploring Cavendish. There are lots of scenic drives throughout the island because the entire place is gorgeous!

Our best meal by far was near Cavendish. We went out to North Rustico for a late lunch at Blue Mussel.  We shared a seafood chowder poutine, Della got a lobster roll, and Eric got a bubbly seafood bake. The setting was lovely and the restaurant quite pleasant! 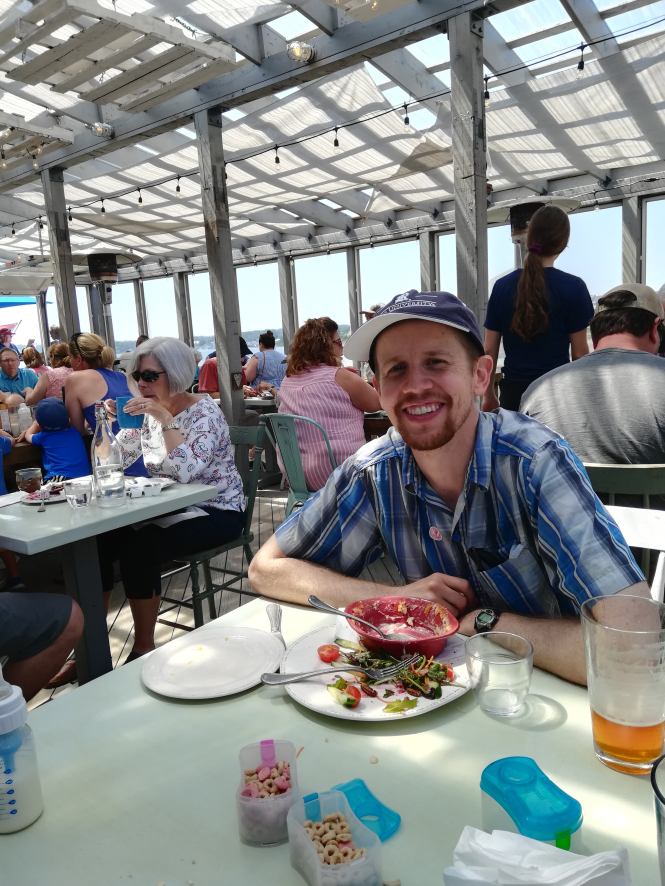 In one of our prior posts, we shared our strategy for eating out so much with a toddler. That strategy worked pretty well for *most* of the trip. However, at the halfway point, in PEI, he had started getting sick of it. There were one or two difficult meals where he was pretty antsy and grumpy. So, in PEI we made the choice to order in to our hotel a couple of times. This meant that Kiddo could run around the room and play with his books and toys while we ate.

Swimming with a toddler is a much more difficult proposition that we were anticipating. He doesn’t really understand the concept of “just putting your toes in.” If you’re swimming in the ocean with a toddler, ideally, you do not have to get there in the car and you have multiple people to help with the showering/cleaning up afterwards. The idea of putting a wet toddler in a car seat you need to use again soon with sand caking the inside of his diaper is very unappealing.

Kiddo was at a stage where he really wanted to do a lot of walking himself. However, that makes the hikes go very very slowly. We struggled to keep him moving forward and not stopping to check out every single rock and leaf. That was until we figured out that he was super excited about trying to run with help. He couldn’t really run by himself yet, but we we both held his hands and said “run run run” he would move forward at the quickest pace he could!

We have never visited so many playgrounds than we did on this trip. There were often times when Kiddo just needed a chance to run around and enjoy himself. We downloaded a playground app called Playground Buddy which seems to be a crowdsourced app to give information about playgrounds near you. It worked OK, but it needs more people! Join and give info about your playgrounds. (If you happen to know another app that you use for this purpose, please share!) We also just ended up googling to find the nearest places. Kiddo was much happier even if we just took a break to play for 15-20 min. We even found one near our hotel in Summerside so he could play before our long drive to Halifax. 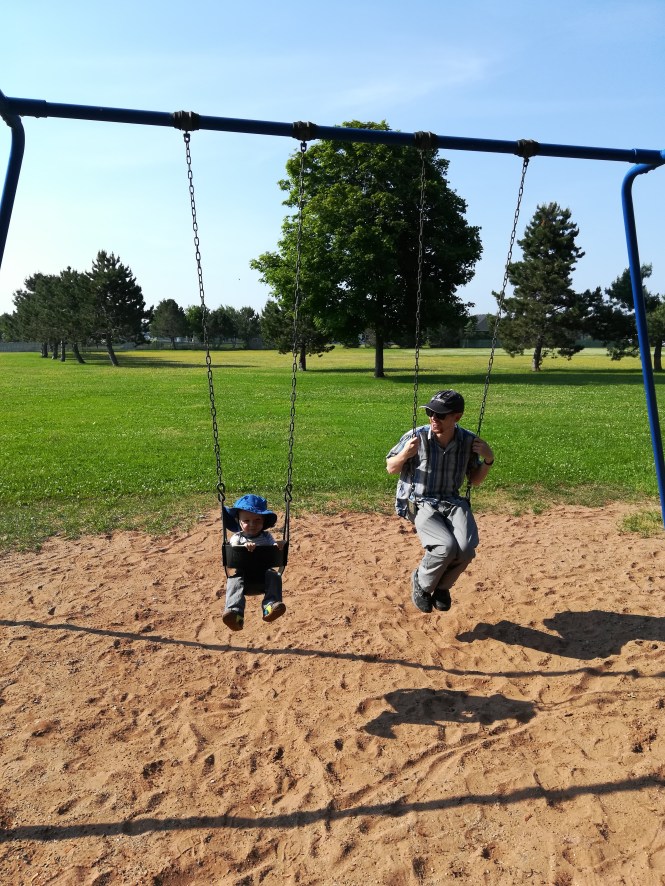 One thought on “Kindred Spirits in Prince Edward Island”