We visited Maine as part of our 2 week New England and Canada road trip.

We were able to see several friends in Maine and explored mostly the coastal region of this state that we had never visited!

The title of this post hearkens back to a children’s board book, Good Night, Maine. One of our good friends gave this to Kiddo as a gift when we visited her in Northport and it quickly became an absolute favorite. We had to read it over and over again. He would let us know loudly that he wanted to read it by yelling “Mane-O Mane-O!”

Our first stop in Maine was in Kennebunk. We used this time to catch up with a friend who experienced the Nepal Earthquake with us. We didn’t really get much of a chance to see Kennebunk except for a quick drive through. It looked like a beautiful town!

We spend one night in Portland. Our evening involved exploring downtown and struggling to find a place to eat that had no wait and seemed baby friendly! The town was quite cute. The following morning we explored Fort Allen Park on the Eastern Promenade. It was a lovely day and we all enjoyed the walk with a beautiful view of the bay. 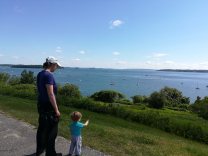 We spent an afternoon in Bangor. We were mostly looking for a place that was halfway between Portland and St. Andrew’s (NB, Canada). But, Eric had read about how Stephen King lives in Bangor and how several of his books use it as an inspiration for location. We drove by the house and then ate a quick lunch in downtown which was also quite cute. We walked around briefly and then drove to another attraction we had heard about – the Paul Bunyan Statue. We wish that we had found another park to enjoy because Kiddo wasn’t really ready to be back in the car after our sojourn in Bangor, but we had to move on! 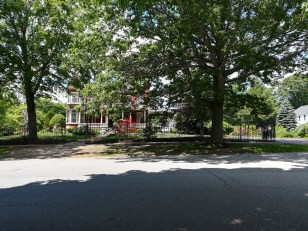 After spending several days in Canada, we returned to the USA. We stopped for lunch in Machias where we enjoyed a Haddock Rueben and a Clam Chowder at Helen’s. In our attempt to find interesting things to do halfway between Saint John (NB, Canada) and Northport (our final destination for the day) Eric had explored the Altas Obscura and read about Wild Blueberry Land. We stopped at this unique locale for a short while so Kiddo could explore and stretch his legs. It did look like it had seen better days, but it is still a place to find wonderful blueberry everything. We purchased some preserves and a delicious slice of pie. We also watched the workers briefly doing some painting on the miniature golf course which was currently closed.

We spent 3 lovely nights with a friend in the town of Northport. Her family owns a cottage right on the water. We spent one relaxing day on her front porch taking in the scenery and then playing in ocean while the tide came in. It was also a nice place to stay that wasn’t too far away from our next day trip…

hanging out on the porch 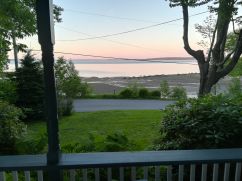 view from porch during sunset 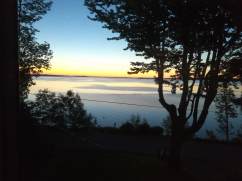 Our first stop in Acadia was the visitor center to pay our park fees and get our bearings. From there we decided to drive to the top of Cadillac Mountain. It was a pretty short drive. Upon reaching the top, we took a short walk around just taking in the views. Before heading out, we had a small picnic lunch on the rocks.

We headed back to the visitor center to drop off the car because we had decided to take the park shuttles for the rest of our adventure. There are several different shuttles that take different routes throughout the park and you can get all that info at the visitor center as well as view signage at the different stops. We headed first to Sandy Beach. We didn’t actually go to the beach, but instead walked along the Ocean Path to Thunder Hole. The walk was quite nice visually, but it was hot and right along the road so it wasn’t as pleasant as we had initially hoped. If we hadn’t been carrying Kiddo, we might have explored more along the rocky shore.

Unfortunately, Thunder Hole was very crowded and was not doing its thing. We understand that often the waves crash loudly over the rocks and explode up quite high so it is both visually and aurally interesting. However, at the point we were there it was really quite tame.

We caught a shuttle onward to Otter Point. This was one of our favorite spots of the day. It was quiet and pleasant with lovely views. Unfortunately, we were starting to feel a time crunch. Our host had a dog that she had left at home which was 1.5 hours away and we knew we needed to get back.

We made only one more stop at Jordan Pond where we only had a brief time to walk down to the pond and a few minutes around the trail.

Acadia was, as many national parks are, crowded so it didn’t really feel like we were getting out in nature. However, there were several less popular spots that we wish we could have spent more time exploring!

Our plan of driving morning and late afternoon really worked quite well. Kiddo was able to explore during the afternoon and slept during the car rides. This strategy lead us to some lesser visited and more unique places. We did decide that for the most part, stopping for just a lunch was not enough give Kiddo the time he needed to stretch his legs.

Our hook-on highchair was really useful for staying with friends who don’t have kids themselves!

While we were glad we saw as much as we did on the two week trip, it was really nice to spend an off day in the same place without a ton of sightseeing involved!

We had brought several books for Kiddo along with us on the two week trip, but we acquired a few more from different friends along the way and it was definitely a good thing to gain more options as the time went on. This kept it fresh and new for Kiddo.

Eating with Kiddo at restaurants can be challenging sometimes – especially when he just spent multiple hours in a car and is much more anxious to be stretching his legs. We built a pretty good “keep kiddo entertained” strategy for eating as our trip went on. We always carried crunch snacks with us like Cheerios or other baby foods. As soon as we sit down in a restaurant, those come out. It normally keeps him entertained through ordering. As we are waiting for food to arrive, we often would take out a toy or two in addition to the crunchy foods. He currently is really into anything with wheels. If we were lucky, that would take us until food arrives, then he would be busy eating more and trying all the food we had ordered. As he got sick of that, we would pull out his bottle of milk. In order to give us the time needed to finish our meal and pay our check, our last strategy was to give him a baby squeeze pouch which he really enjoys. This got us through *most* meals with no problem!

Flexibility was key. While we did try to make sure that our journey gave Kiddo an opportunity for 2 naps, we never really timed anything. Occasionally, he had to be ready to go down for first nap as early as 9 and other times we ended up pushing it back to 11 or so. So, the fact that we did this trip when he still took 2 naps but probably only truly needed 1 was really helpful.