Our second stop on our two week journey with Della’s family was the city of Istanbul.

To get to Istanbul from Athens, we took a flight on Pegasus Airlines, one of Turkey’s low-cost airlines. This meant that we didn’t get a free beverage on the flight, so it was basically just like flying on any other airline back in the USA.

The downside of our cheap flight was that it deposited us at the lesser-known airport in Istanbul (Sabiha Gokcen). Since this airport is less popular for international visitors, it isn’t super easy for tourists to get from it to the tourist neighborhoods. We found a few different pieces of advice online and ended up coming up with a plan that worked quite well and gave us a nice first glimpse of the city. From the airport, we first took a Havatas bus to the Kadikoy ferry terminal (still on the Asian side of Istanbul). From Kadikoy, we were able to immediately hop on a ferry to Eminonu, the port of the Golden Horn on the European side. The ferry ride was quick (15 minutes) and gave us nice views of both sides of the Bosphorous Strait. Once at Eminonu, we hopped on the TI tram line and rode three stops to the Sultanhamet stop. From there, we were able to walk to our accommodation. It turned out being a lot cheaper than a taxi, and felt a lot more adventurous!

Our first glimpses of old Istanbul by ferry

We chose to stay in the Sultanhamet neighborhood, near all of the major sites. The upside of this neighborhood was the proximity to the major sights in Istanbul, but the downside was that it was harder to find restaurants and other facilities with non-touristic prices.

We booked a nice three-bedroom apartment through Airbnb. It gave us plenty of space to spread out, and even had a small glimpse of the Blue Mosque from one of its balconies. 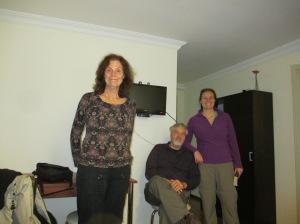 Hagia Sophia – This very impressive structure, built in 537 AD, has served as an Eastern Orthodox cathedral, a mosque and now a museum. It is especially renowned for its massive dome, which was quite a feat for the time it was built. Walking into the nave and looking up at the dome was awe-inspiring. It was fascinating to look around and find the different examples of both Christian and Muslim decorations throughout the interior.

So nice to have the whole family together!

… next to Christian decoration

A Byzantine angel with the face restored

Blue Mosque – Across a park from the Hagia Sophia sits the “Blue” Mosque. Its name is actually the Sultan Ahmed Mosque, but it is known as the Blue Mosque because of the prominent use of blue in the decorative tile work within the interior. Its construction was completed in 1616, so it is not nearly as old as the Hagia Sophia but still quite impressive. It is still an active mosque, so we had to delay our visit to the interior while we waited for the afternoon prayers to be finished. We also had to remove our shoes and the ladies had to cover their heads.

Blue Mosque as seen from the Hagia Sophia

The exterior of the Blue Mosque

Women must be covered to enter

Basilica Cistern – We (Della and Eric) were excited to visit this underground chamber because it featured prominently in the Dan Brown novel Inferno and in the Clive Cussler book Crescent Dawn which we had just read. This large chamber was built under the reign of Emperor Justinian in the 6th century BC and was used for water storage for the city. The roof of the cistern is held up by a forest of columns, which seem to have been taken from different sources based on the fact that they are different sizes. Two of the columns have the head of Medusa as a base.

Della is being Dirk Pitt … or Robert Langdon

Medusa heads at the bottom of columns

Some of the more modern colums

The Hippodrome – This large area next to the Blue Mosque was once the Hippodrome, a large stadium used for chariot races during the Byzantine era. Only the shape of the track remains today. There are two large obelisks in the middle of the Hippodrome. One is from Egypt and is in great condition. Another was built in place but looks in much poorer condition because its bronze plating was stolen.

Jelfie fail… except for Eric!

Topkapi Palace – The other big sight in the Sultanhamet area is the Topkapi Palace, which was the home of the Ottoman sultan from 1465 to 1856. The palace has four different courtyards and many exquisitely decorated rooms. We toured through all of the areas open to the public, including the harem which required an extra ticket. We were particularly excited here because it finally happened!! – Someone recognized Eric’s Rice baseball hat. We met a current Rice student (Jones College) who was studying abroad. How fun!

Passing into the Second Courtyard through the Gate of Felicity

The women in the harem

In the Courtyard of the Eunuchs

The Imperial Council. Inside, the sultan’s various advisers would discuss matters of state

The Fourth Courtyard of the palace was mostly used for relaxing

The Palace definitely has a nice view over the Bosphorous

The New City – After spending so much of our time in Sultanhamet, we decided to head to a different part of town to check out the modern face of Istanbul. We started at Taksim Square, the site of the recent political demonstrations, and headed down Istiklal Caddesi, a major pedestrian thoroughfare. The number of people going up and down this street was very high. There were many shops and restaurants along the way that were bustling with activity. We also enjoyed seeing the nostalgic tram go back and forth, but didn’t ride it ourselves. We finished our walk at the Tünel, a funicular that is one of the oldest underground rail lines in Europe.

The Monument of the Replublic in Taksim Square

Istlikal Caddesi was buzzing with activity

As the evening started, the crowds still were going strong

A mid-walk snack of mussels

The nostalgic tram rolls past

Taking the Tunel home after a long day of sightseeing

The Grand Bazaar – We walked through the hundreds of shops in this large complex and did a little shopping. Our Rick Steves guide helped us find some hidden corners of the market, including a courtyard where we were able to observe silver craftsmen at work.

The main “street” inside the Grand Bazaar

A silversmith at work

Süleymaniye Mosque – We also visited this massive mosque, which was built in 1558. Its architecture is reminiscent of both the Hagia Sophia and the Blue Mosque. The interior decoration is more reserved than that of the Blue Mosque, favoring pastel colors instead of the blue tiles. We found this mosque to be very peaceful inside and spent some time just sitting and relaxing.

The cemetary and one of the mausoleums

The inner courtyard and entrance

Taking it all in

The Spice Market – We shopped this market known for its food products. While the inside of the market was impressive, we were even more impressed by the amount of items being offered on the small streets just outside the market building. It was a very popular place, so the small streets were choked with people. At one intersection it was even a little scary – people were literally crammed together. Luckily we made it out safely.

The crowds got thicker as we approached the market

Istanbul Modern Art Museum – Peggy and Dana took advantage of this museum’s extended hours on Thursdays and visited in the evening. They reported that the art was quite interesting. Definitely a different feel to this art than what we had been seeing in the other museums!

The area around our apartment didn’t have many inspired choices; most of the restaurants seemed slightly overpriced. We did find one nice place the first night that offered a free appetizer, and gave us a good introduction to Turkish food. We also had an interesting meal near the Hagia Sophia where we ordered by pointing to different trays of food set up in the front. Near Taksim Square, we ate at a place called Taksim Sütiş which had good entrees, but the most impressive part was the wide range of puddings available for dessert. We did also get one of the classic fish sandwiches from one of the restaurants near the Galata Bridge, but we only thought it was ok.

Our first dinner in Istanbul

Dessert at the pudding place by Taksim Square. The item on the left is ashure, a mixture of fruit and nuts. The item on the right is a white pudding, made with chicken but with a sweet taste

The neon lights adorn boats that serve fish sandwiches for about $3. The mosque in the background is the Suleyman

We enjoyed our time in Istanbul, and found the architectural sites very interesting. The dreary weather and slightly higher than expected prices put a little bit of a damper on things, but overall it was still a fascinating city!