We were really enjoying Hong Kong, but we also wanted a chance to visit another Special Administrative Region (SAR) of China: Macau. We really knew very little about this tiny place. Much like Hong Kong, Macau is a city that was once administered by a colonizing country, despite being attached to the China. Hong Kong belonged to Great Britain, but Macau belonged to Portugal until 1999.

Despite now being officially part of China, it still has two languages: Chinese and Portuguese. Also, similarly to Hong Kong, Macau falls under a policy of “one country, two systems.” This means that while it is a part of China, Macau maintains its own legal system, the public security force, monetary system, customs policy, and immigration policy. It also has established itself as something of a “Vegas in the East.” A lot of its economy focuses on gambling, and huge casinos dominate the city. We also had heard that it had a lovely, Portuguese-influenced, old town. We were quite excited to visit Macau and experience the diversity the city had to offer.

Getting there proved to be a bit more difficult than we had hoped. We had read that it was an easy process: take a ferry. The ferries supposedly left from Hong Kong every 30 min. That sounded pretty simple, so we didn’t really rush in the morning and left our hotel around 10.

We rode the metro to the Sheung Wan station, then worked our way through a mall to the TurboJet offices. We arrived at the ferry terminal only to find that, while it was true that the ferries left every 30 min, you couldn’t necessarily buy a ticket for the next upcoming ferry! They were full! The next available ticket wasn’t until 11:45.

We went ahead and went through Hong Kong exit immigration and went downstairs to the waiting area. At this point, it really felt like we were in an airport, waiting in the lobby and boarding at certain times. We boarded on time and found our assigned seats in the lower part. The ferry was quite fancy – felt like an airline interior. The ride over took about an hour. A little choppy but not so bad that we couldn’t read. 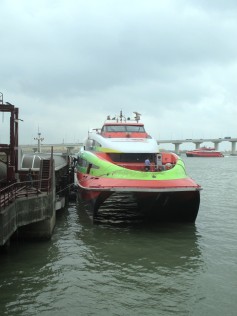 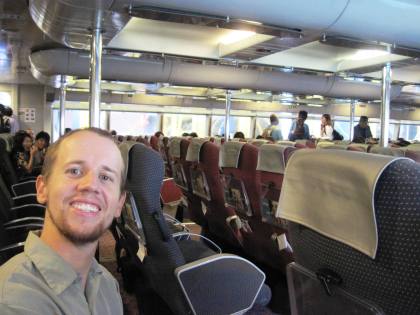 Once in Macau, we had to go through immigration to get in, pretty much like we were arriving in another new country! They didn’t actually stamp our passport though. We couldn’t decide if we were happy or sad about this. We did want the stamps, because its definitely fun to look back at the stamps in the passport, but we were a little worried because we were both running out of pages in our passports!

Outside we found the tourist information desk. They weren’t super helpful but we did pick up some maps (and even a walking tour brochure made by UNESCO) and get the bus number that we needed to take. Luckily Hong Kong dollars are 1-to-1 with the Macau patacas and are accepted there so we didn’t need to get money.

We rode the #3 bus which took us into the historic part of town.

We focused our efforts mostly on completing the UNESCO walking tour. We ended up starting in the middle though, so we had to do it out of order.

We had taken the bus to Senado Square. It was quite pretty, with wavy white and black cobblestones and colonial buildings. But it was also full of tourists, which detracted from the effect. 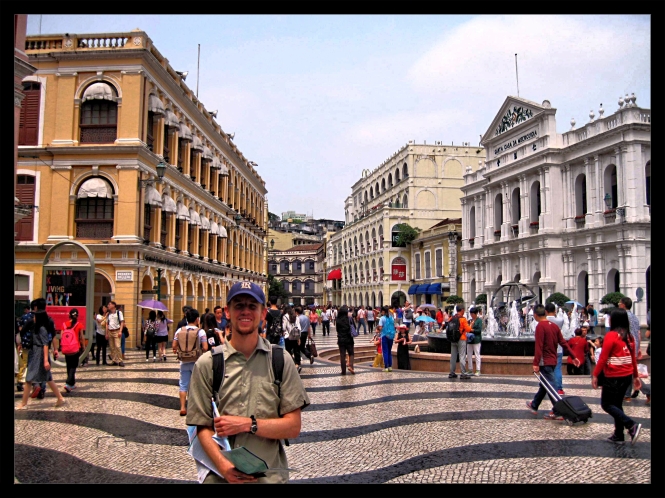 We headed north, finding more of the sights marked on a UNESCO walking tour book. This took us by a the small Sam Kai Vui Kun Temple, the Lou Kau Mansion – a traditional Chinese merchant’s house that we could go into for free, St. Dominic’s Church, and “The Cathedral,” set in a calmer square. It felt in a way like we were back in one of the Croatian coastal towns, with the shiny cobblestones and pretty architecture, but also with the crowds squeezing you at every turn. 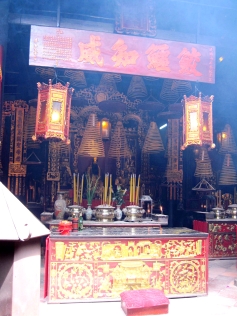 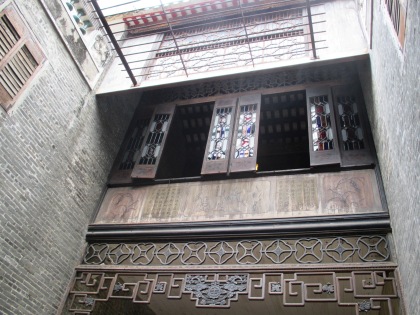 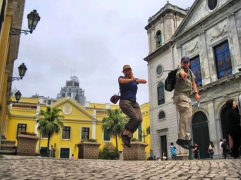 After this we were getting a little hungry so we saw a bakery on a side street. We shared a snack of fried wontons, a fried dumpling, and the Macau classic egg tart. 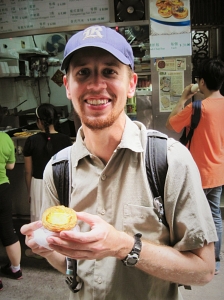 Eric with an egg tart

To get to the next stop required us to go up a narrow lane past places selling beef jerky and cookies. These were quite popular with the Asian tourists, so we had to squeeze through very crowded spaces around those who had stopped to get free samples. Brought back some memories of the Spice Market in Istanbul! 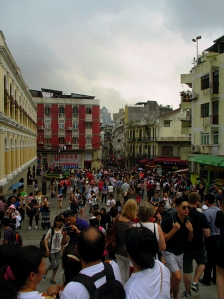 We finally made it to the iconic image of Macau, the façade of St Paul’s church. The rest of the church burned down in a fire, but the intricately-carved façade remains. We maneuvered around crowds to take pictures on the stairs and the platform below. We had an interesting time trying to find the Asian and Western influences in the artwork. 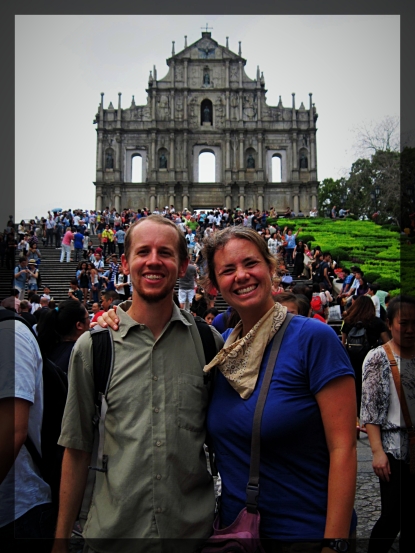 The ruins of St. Paul’s 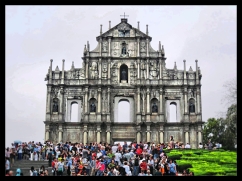 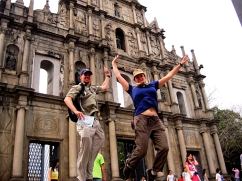 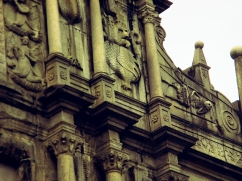 We found the skeleton particularly interesting

We then went up onto Mount Fortress, one of the many fortresses built by the Portuguese in defense of the city from the sea. We got great view over the city from the top. It was interesting to note that many of the residential buildings looked run down, but the fancy casinos gleamed in the distance. 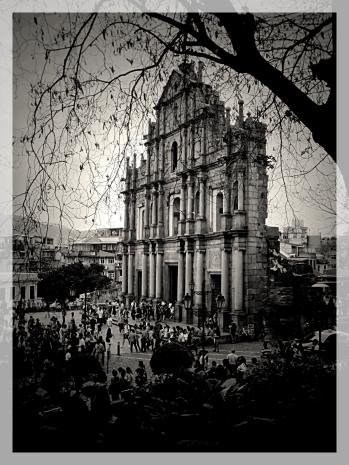 View of the facade of St. Paul’s from Mount Fortress 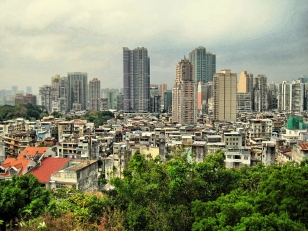 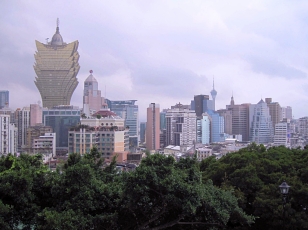 The cityscape with the big casinos 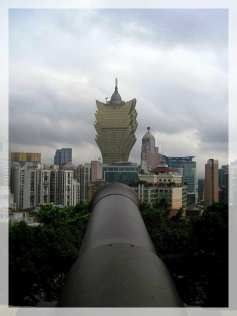 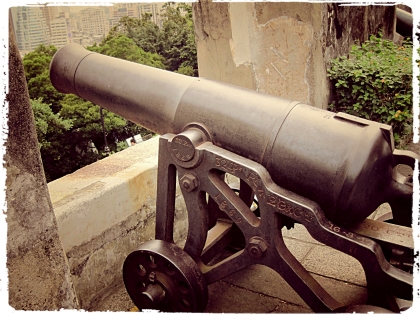 From here we could enter the Macau Museum. It started out promising with an interesting comparison between the history and culture of the West and East before they met up in Macau. They then sped through the history of how Macau was actually founded, but had large displays on life, trade and religion during the early days of the colony. 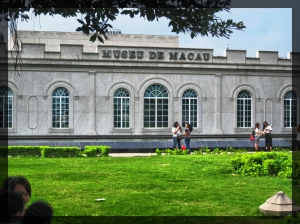 On the second floor they had set up facades of different types of houses in Macau. It was pretty fancy like in the Hong Kong Museum – guess they like their faux-towns here! We waited a bit for a show about the fisherman in the inner harbor but left before it was over since it was slow. We then went through exhibits on life and traditions in the later part of the colony, with displays about the different types of shops, mannequins representing the street hawkers, setups showing typical dining and living areas, and wedding traditions. The final floor was a bit random, with sketches of life in early colonial times, a movie about modern Macau, a few displays on Macau clubs abroad, and then very brief information about it rejoining China in 1999. Overall, we quite enjoyed the museum. It was just about the right size; you felt like you could read everything without spending days. However, the lower floors were the best. 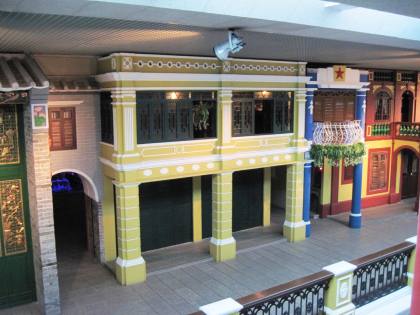 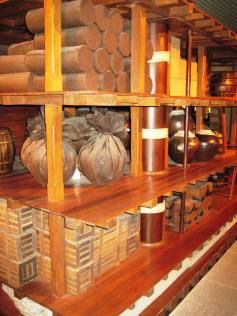 We headed back out and continued the walking tour. Back near St Paul’s we saw a section of the old city walls and a tiny Chinese temple. We walked down to a much quieter street and walked further north to the Camoes Square, which was filled with people playing and relaxing. We peeked in the nearby Protestant Cemetery where there were a good number of Americans buried. 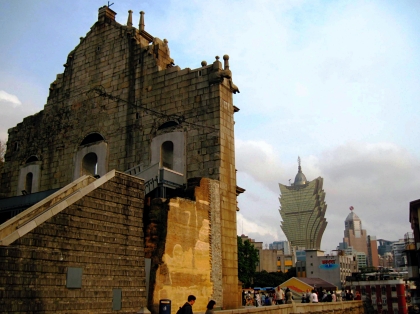 The Old and the New: St. Paul facade with the Grand Lisboa Casino 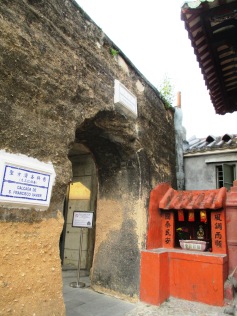 Part of the old walls 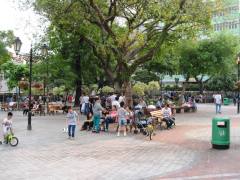 a grave in the Protestant Cemetary

We were getting hungry, so we went a little further. We didn’t see any restaurants that looked like a good fit for us, although we did see an ice rink! We backtracked through the crowds to near St Dominics. We then went down a random side street and saw a place advertising Macanese food, and decided to go for it. We each got a Macau beer, which wasn’t too bad. For meal, Eric got chicken in Portuguese sauce with rice, and Della got broad noodles. 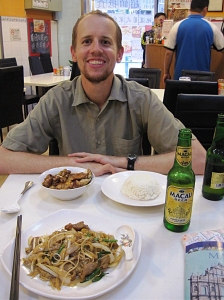 We walked past Senado Square to see a few more of the sights on the tour. The bulk of them were found on St Augustine’s Square, including St Augustine’s Church, and the very green Dom Pedro V Theatre. We were getting tired, so we decided to find one more sight: St. Lawrence’s Church. 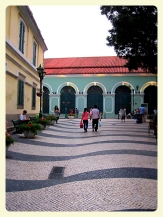 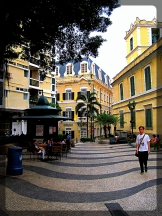 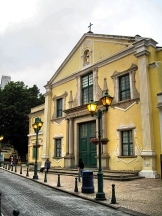 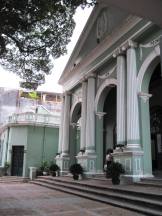 From here we cut down to the water and walked to the casino area. Eric wanted to make sure to experience to glitzier, modern side of Macau in addition to the old town. So, even though we were pretty tired, we went into the fancy Grand Lisboa. We walked around the interior and gawked at their gaudy pieces of art on display. We also went into the casino floor, where we just strolled through. The minimums were very high so we didn’t play anything. We did pause to watch a burlesque show that randomly happened on the main floor.

Elaborate carving inside the casino

It was about 7:30. We hoped to not to have to wait too long for a ferry, but the only ticket they were selling was not until 9:45! We bought it before completely thinking it through and were pretty bummed. The scalpers near the window had earlier tickets but wouldn’t trade. Della was furious, knowing that the scalpers had purposely bought up all the upcoming tickets. Feeling disappointed, we found a quiet place to sit and read books for a while.

Then we decided we might as well go into the departures area and see if we could get on an earlier boat. We went through Macau exit immigration and made our way inside. As it turns out, getting on an earlier boat is a standard thing. Each gate has a separate line for standby passengers. You have to gamble a bit as to which line you choose, since the lines don’t roll over to the next ship. At first we thought about getting on the 8:45 line, but we would have been a little further back. Instead we just went to the 9:00 line since we would be some of the first in line. We were pretty nervous when 9:00 rolled around, but we made it on just fine.

We were assigned seats up top. The ride back was smoother than the ride there and also took about an hour. We had to go back through immigration to get into Hong Kong. 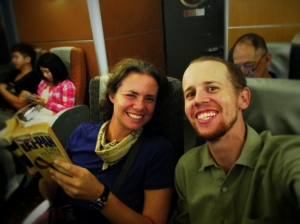 In the end it seemed like quite an ordeal to get there and back in one day! We should have maybe spent the night there, or left earlier, or gone on a day when it would have been less crowded. The old town was simply lovely, and we really enjoyed feeling like we were in Europe again for a time. However, the crowds did ruin it for us a bit. We suspect it might be really lovely in the evening, when some of the day trippers have left!

4 thoughts on “Meandering through Macau”