We already briefly visited Athens earlier in our trip when we needed to take care of some business. After we finished our tour of the Peloponnese, we wanted to make sure to get to Athens in plenty of time to meet Della’s parents and sister for a trip through Athens and Turkey starting on Saturday the 8th. So, we got to Athens on a Tuesday just to be safe. However, we didn’t want to see the major sights in Athens without the rest of the group, so instead we saw some of the lesser known sights. This post will just describe this pre-family part of the time in Athens.

We felt like Airbnb had provided a good value the last time in Athens, so we decided to choose an Airbnb for this stay as well. Unfortunately the place we stayed the previous time was unavailable, but we were able to find another nice apartment near the Panathenaic stadium. Again it was a decent-size studio apartment with a bedroom/living room, kitchen and bathroom. We took advantage of this space to do our own cooking and just relax during most of the evenings.

Like we said, we still didn’t want to see the major sights, so we had to do a little research to decide what to see.

Panathenaic Stadium – Our apartment was near this large marble stadium, which was built in 1896 for the first modern Olympic Games. Our Airbnb host told us that there was a back entrance that would be more convenient to use, so we tried that. What we didn’t realize until we got in was that this got us entrance to the wooded park around the stadium, but not the stadium itself. On the positive side, the park gave us great and free views of the stadium. The negative side that we figured out the hard way was that the only way back out was the secret way in. Instead, we spent quite a bit of time walking around the park, encountering multiple locked gates. We intended  to pay to enter in the front gate, but by then time was running short so we decided it wasn’t worth it.

The view from the end of the stadium. They were setting up for the marathon finish line

The view of the Acropolis from the stadium

We were attempting to do a running leap for this jelfie…

Philopappos Hill – Out Airbnb host also recommended climbing to the top of this hill next to the Acropolis near sunset for good views over the city and the Acropolis itself. We headed up just as the sun should have been close to setting… but it was a little overcast so the colors weren’t spectacular. Still, it did provide great views of the surrounding area.

The view of the Acropolis, halfway up

From the top, looking at the Acropolis

Looking south towards the sea

Acropolis view from the top jelfie

The view over the heart of the city, looking east

Jelfiie on the way down

Numismatic Museum / Iliou Metharon – We both read the book Greek Treasure on our trip, which described the exploits of archaeologist Henry Schiemann. In the book, the author described the large mansion that Schliemann built in the city of Athens. When we saw that the mansion still exists and can be visited, we decided to make a trip! It currently houses the Numismatic Museum. We don’t really have an interest in coins, but we figured it would be worth it just to see inside the mansion. We really enjoyed our visit, especially since the mansion is still decorated in the manner that Schliemann designed, with the walls covered with colorful paintings inspired by his finds. The museum also included a nice audio guide, so we ended up learning quite a bit about coins as well.

Learning about coins in the dining room of the mansion

Going up the staircase

Temple of Poseidon at Sounion – We took a day trip out to the archaeological site at the tip of the Attic peninsula. The star attraction is the Temple of Poseidon, which sits high on the peninsula overlooking the sea. We took a KTEL bus from the station north of the Archaeological Museum, and enjoyed the two-hour ride down the coast. At the site itself, there wasn’t much to read or see, so we just spent some time admiring the views (and finding Lord Byron’s graffiti on one of the columns of the temple). After only a couple of hours, we decided to return home on another KTEL bus that was about to leave: after our KTEL frustrations at Mycenae and Epidavros we decided it was a good idea to catch a bus when we saw one!

The Temple of Poseidon from below

The Temple of Poseidon

Jelfie in front of the sea

We again took advantage of having a kitchen and cooked a couple of meals. We also went to a local pita place and had souvlaki pitas a couple of times. And, we’re a little embarrassed to admit… one night we saw a Domino’s pizza and we decided to get just a little bit of taste of home. Please don’t judge! 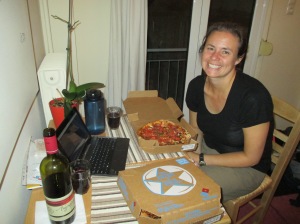 Enjoying some of the traditional local cuisine

We think we did a pretty good job of seeing some of the second-tier sights in Athens. It was a little tempting to sneak up onto the Acropolis, but we were able to resist until Della’s family arrived in a few days :).

One thought on “Athens Part 2”