Our final stop on our trip through Myanmar was its largest city (and former capital), Yangon. We had initially only planned to spend a couple of our last days in the country in this city, using it as a base for a trip to the “Golden Rock,” but in the end we decided to just spend all of the time exploring the different things the city had to offer.

The main option to get to Yangon from Inle Lake was an overnight bus. We had to choose between the “normal” and “VIP” class buses, and we went with the VIP option with the hope that it would make sleeping easier. The seats were quite large, and had a good recline feature and a footrest. We also got a snack box and a toothbrush to use at one of the rest breaks. During the first part of the trip, they played music videos and one movie on the overhead tv, but for most of the journey the cabin was pretty dark and quiet. It really was quite comfortable,  but even so, we didn’t actually end up getting too much sleep, so after checking into our accommodations in Yangon at 7 AM, we took a nice long nap. 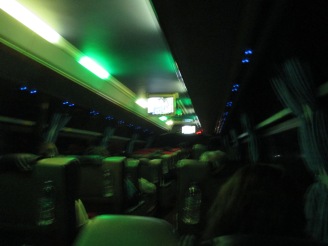 The only picture we got of the interior of the bus

Finding a cheap but well-reviewed place in Yangon turned out to be quite a challenge, as there were many cheap places but almost all with average ratings. In the end we found the Hninn Si Budget Inn and ended up generally enjoying our stay. We had a small double room with a shared bathroom down the hall. The rate included breakfast, although it was the least interesting of any breakfast we had in Myanmar. The staff was very kind and helped us with transportation a few times.

Our room at Hninn Si

Explore Downtown Yangon – The city has a lot of interesting sights to see in its downtown core, a lot of it left over from when the city was called Rangoon and functioned as the capital of the country during the colonial occupation by Britain. We ended up exploring this area twice: the first on our own using a self-guided walking tour in Lonely Planet, and the second time on a free walking tour led by Free Yangon Walks. The highlights included the Sule Paya – a large pagoda which now sits in the middle of a traffic circle, Mahabandoola Garden – a very pleasant park where we relaxed in the shade and made conversation with locals wanting to practice their English, and many examples of colonial-era buildings, from the City Hall to old banks to the fancy Strand Hotel. 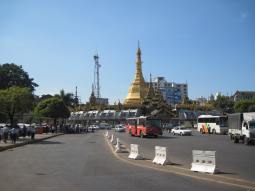 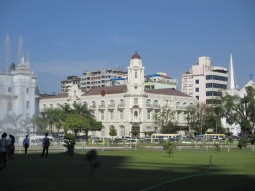 Once the most famous department store in Rangoon, now a bank 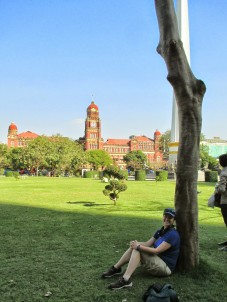 Relaxing in Mahabandoola Park, with the High Court in the background

The Yangon Region Court and an old bank building

Tiles in the Lokanat Gallery Building imported from Manchester

The lobby of the Strand Hotel 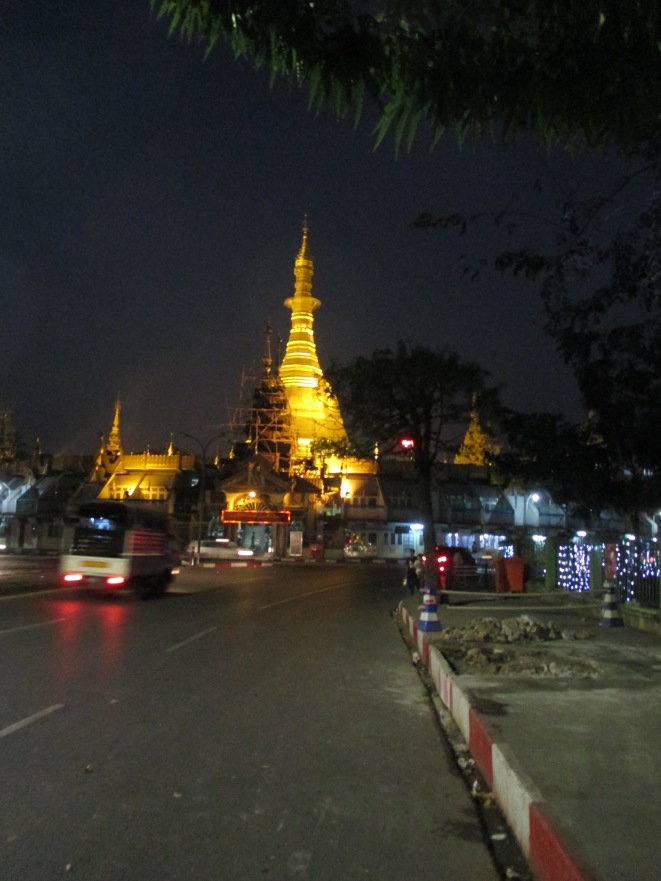 Even more interesting that the architecture was just observing life on the streets of this bustling city. There were food vendors of all sorts, and many people making new packs of the betel nut concotion that a good chunk of the population chews (the effect is supposedly similar to chewing tobacco). There were also vendors selling everything from SIM cards to clothes to even a large selection of used books, including many random English-language textbooks. We were also fascinated to observe the bus system: buses of all ages and conditions would go up and down the street, pausing briefly where a worker (usually a young male) would holler out the back (presumably announcing the destination) while pushing people off and pulling them on. We never worked up the nerve to get on one of these! 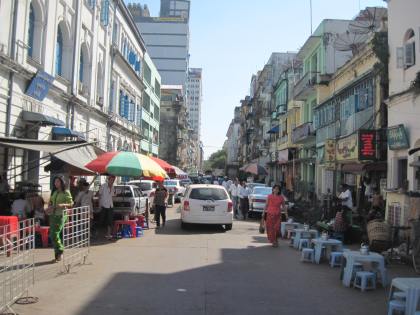 A typical side street

Some of the sidewalks need some work 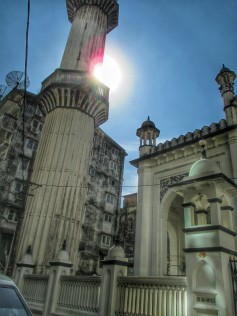 One of multiple mosques we saw 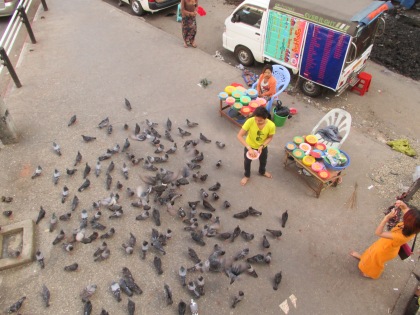 You could buy corn to feed pigeons 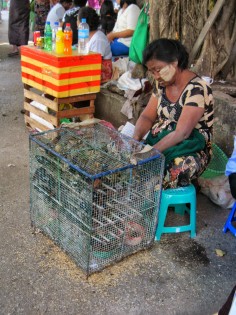 Or buy a bird to releae

Or a fish to release (?). This stall was outside a cell phone store 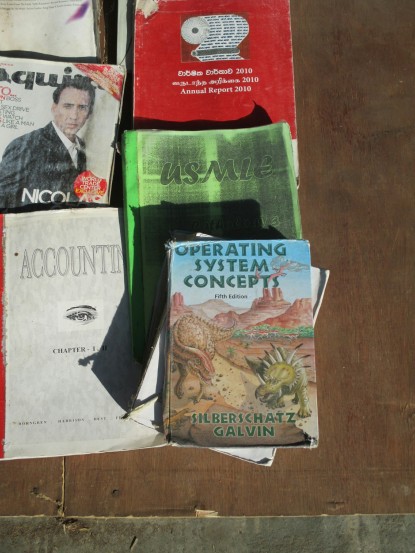 One of the older buses on the Yangon streets 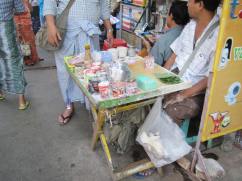 One of the bus workers hollering for new riders

Ride the Yangon Circle Line – Yangon only has one commuter rail line: the Yangon Circle Line, which makes a slow loop around the city and its surrounding residential areas. Since it is a loop and costs so little ($0.50 per person), it has become a popular tourist activity. Some reviews made it sound pretty hectic, but we actually found the three-hour ride to be quite relaxing. Maybe it’s because we went on a weekend during the middle of the day; there was never too much of a crowd. We were quite interested to see life outside the train, including lively markets at some of the larger stops. Also, we enjoyed watching some of the people who hopped on the train midway through use the rest of the train ride to change their large collection of produce into sellable bundles.

Hopping on the train

The ride was slow and quiet 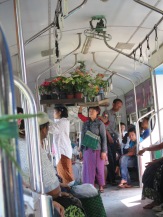 Flower sellers somehow able to balance their wares on their head 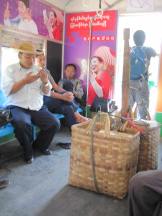 Train workers and police at the back of the train

Life outside the train

Life outside the train

Shwedagon Paya – Many people consider this to be the most important Buddhist site in all of Myanmar. We planned our visit to have us arrive by sunset since the color was supposed to be the best then. The temple complex includes many smaller shrines, but the highlight is the massive central stupa. Unfortunately, a lot of it was covered in bamboo scaffolding during our visit (although you could argue that the scaffolding itself is interesting to look at). The entrance fee was the most expensive of any payas we visited in Myanmar, although we were happy that we got a detailed map with labeled narration for many of the smaller shrines. 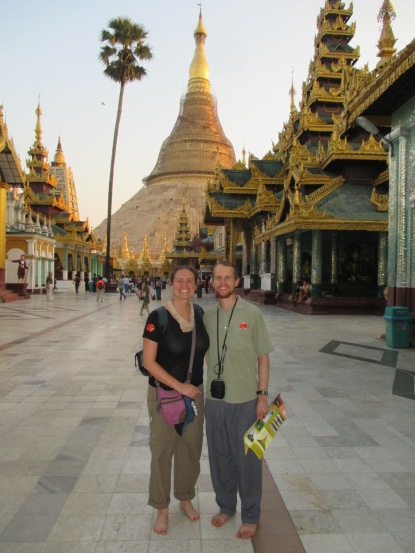 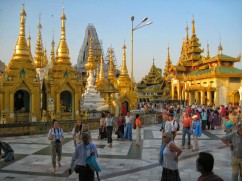 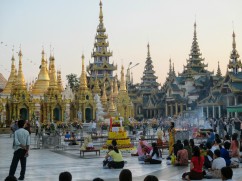 Many people participating in a ritual 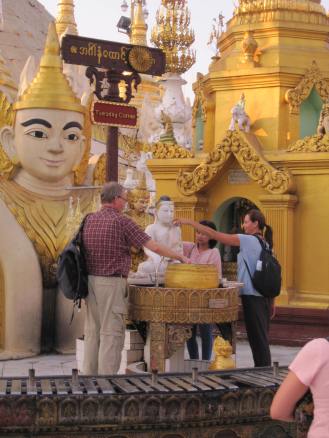 The stupa at sunset 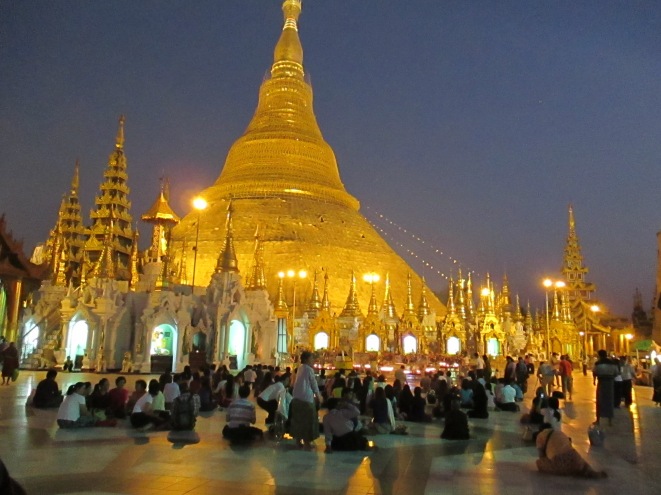 After sunset the worshippers were still going strong

Botataung Paya – Much smaller than Shwedagon, but Lonely Planet recommended it, and it was just a few minutes’ walk from our guesthouse, so we checked it out. We went on a Sunday, so it was busy with worshipers coming and going. The most unique feature was that we could actually walk inside the large stupa – in all other cases this was closed to the public. This one had a maze-like interior with walls gilded with gold and a few different relics, including a few hairs of Buddha that we had to get in a line to see.

The stupa which you can go inside 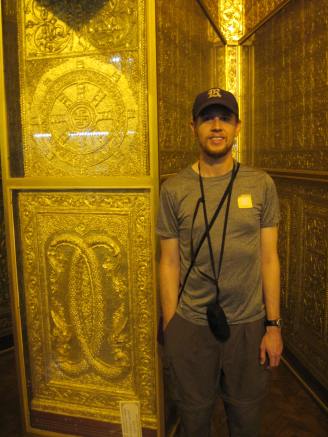 The most sacred relic 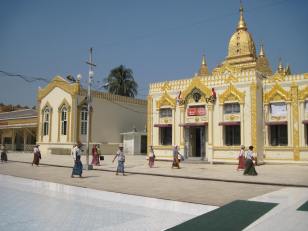 A Buddha statue which the British had “borrowed” for a while 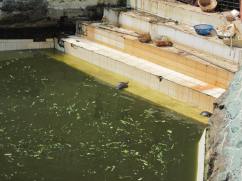 A pond with turtles

Food you could buy as offering to feed the turtles 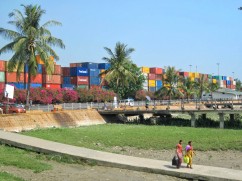 Botataung was near the river

National Museum – We spent an afternoon exploring this large museum dedicated to Myanmar’s history and culture. There were many different exhibits scattered over the five floors, including displays on royal artifacts, fossils, traditional arts and crafts and the different cultures within the Myanmar. We felt the most interesting exhibit was the Lion Throne, one of the eight such thrones used by the king for ceremonial purposes (which looks more like a door). We weren’t even allowed to take cameras into the museum, so we don’t have any pictures of the interior. 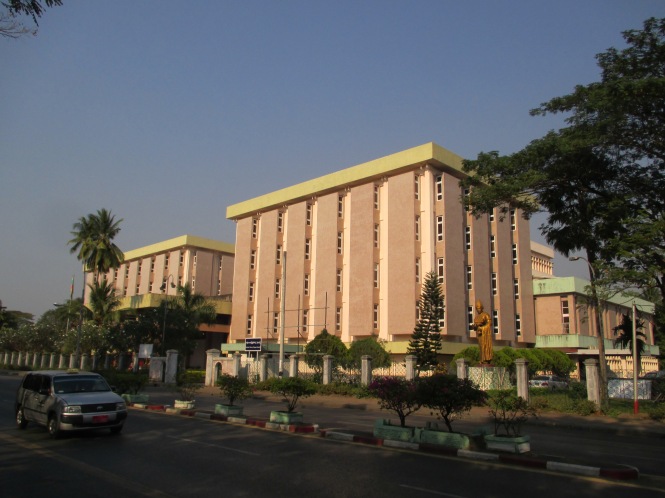 Kandawgyi Lake – We spent an afternoon in this park just to the east of Shwedagon Paya. The boardwalk on the southern edge provided scenic views, but some of the boards could have used some serious repair! It was pretty hot and sunny, so we followed the lead of the young local couples we saw and found a spot in the shade to relax and enjoy the view. 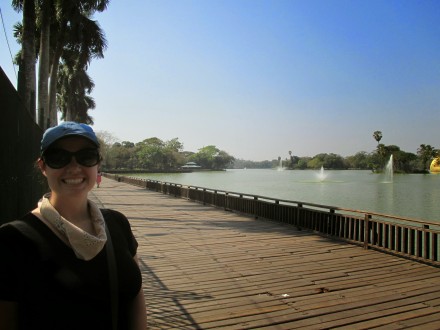 The boardwalk along Kandawgyi Lake

Shwedagon Paya in the distance

A reproduction of a royal craft

People’s Park – This was one of our highlights in the latest monthly update!

Shwedagon Paya in the distance 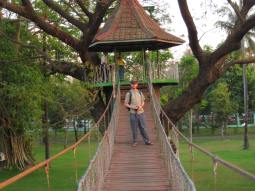 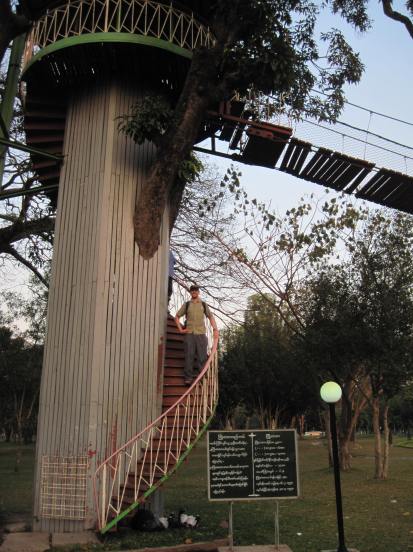 Enjoying the dance music at sunset

Sunset over the park and our time in Myanmar

The most interesting places to eat would have been the different street food stalls all over the place, but we had met enough fellow travelers who reported getting food poisoning that we decided to stick to restaurants. In doing this, we discovered that in most cases, especially near our guesthouse, the restaurants were more expensive in Yangon than they were in other parts of the country. At the Malaysian place across the street we both just got fried rice since everything else was twice what we had been paying for entrees elsewhere, and then at a Chinese/Shan place down the street Eric was downright shocked when the bill came and his dish was $7 (we had been paying in the neighborhood of $2-$3 in other places). 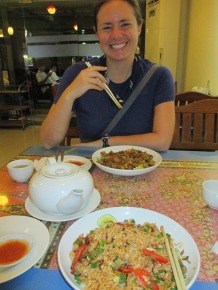 We did find some nice cheap restaurants elsewhere in the city with the help of Lonely Planet. The first was Aung Thukha near the Shwedagon Paya. This was one of the standard curry places where you chose a main meat and got to enjoy it with a soup, rice, and vegetable side dishes. Della got a pork curry and Eric went with catfish.

Catfish curry plus all of the sides

Near the National Museum we ate at Feel Restaurant. The menu was quite overwhelming, with 20 pages of choices, and none of the descriptions in English. We both pointed at pictures that looked good and hoped for the best. Della ended up with a noodle dish and Eric ended up with a soup with the consistency of egg drop soup with a meat that tasted like chicken. We crossed our fingers as the bill came, and were very pleasantly surprised that each dish was only $2!

Where to even start? 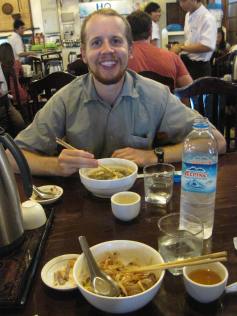 Satisfied with our choices

We think it was the right decision to spend our last five days all in Yangon. There were plenty of things to do, and we enjoyed getting to explore the city at a leisurely pace instead of rushing between sights. The city was also a great way to get a good last glimpse of the people and culture of Myanmar. As we flew out of Yangon, we were a little sad to say goodbye!

2 thoughts on “Saying So Long to Myanmar in Yangon”