Usually after we visit a city we like to write a nice summary post about where we stayed, what we did and where we ate. We’d still like to discuss some of these things with regards to Kathmandu, but it feels weird to talk about the city without mentioning that just a few days after our visit a 7.8 magnitude earthquake hit and did a lot of damage in the city and the country as a whole. So we’ll try to balance our discussion of our time in Kathmandu with what we know of what happened to the sights after the quake.

We arrived in Kathmandu late on the evening of April 20, on a Dragonair flight from Hong Kong. (We really enjoyed using the personal entertainment device on the flight and were able to watch Into the Woods and four episodes of Downton Abbey).

We didn’t get in until almost midnight, but the owner of our hotel, the Hotel Bright Star, had stayed up to check us in. We had a small room on the top floor – the stairs were a nice preview of what we expected to be a lot of uphill hiking on our trek.

This was only a preview of the generosity that the owner showed us during our three days in Kathmandu. He provided plenty of good advice, and walked us halfway to the tourist office (so we wouldn’t get lost) to pick up our trekking permits.

That made it that much harder to see him again after the quake. We had left two bags at the hotel while trekking, and we went back into town on May 1 to pick them up. He said on the phone that he and his family were ok, but when we got there it was clear how close they had come to disaster.

The hotel next door had collapsed during the quake, and all that was left was a pile of bricks and tangled wires. The owner, clearly shaken, told us that 10 people had died inside. We ran inside our hotel to get our bags, and it was clear that it was the first time that he had been back in. He didn’t want to linger, and neither did we; one of the walls of the lobby on the side of the collapsed building was bulging inwards.

The same view after the quake, with the hotel just beyond in rubble

He said the rest of his family had been safely moved to Pokhara, but he would remain staying in a building down the street until all of the left baggage had been picked up. Hopefully the people who left their bags will return soon…

On our first day in Kathmandu we did a self-guided walking tour (led by Lonely Planet) through the old part of Kathmandu. We quickly decided that Nepal was way different from any other country that we had visited on the entire trip! Bright colors all over the place, smells both good and bad in the air, people hawking items, bicycle rickshaws asking for rides, centuries-old temples in every nook and cranny… it was almost overwhelming! 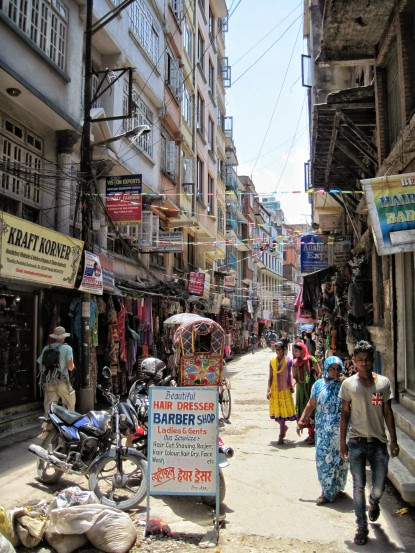 The streets of Kathmandu

A shrine to a toothache deity. If you nail a coin to this piece of wood, your toothache will be cured 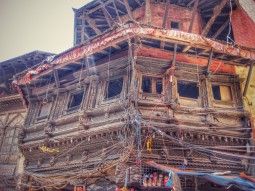 Tree growing out of a temple in a quiet side square 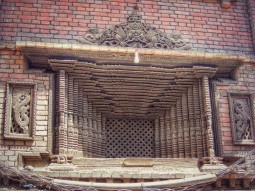 Amazing carving on this window

After the quake, we only ventured back to the more touristy part of the Old Quarter, called Thamel. There wasn’t much physical destruction, but the change in the atmosphere of the streets was palpable. Half of the shops were closed up, and the foot and vehicle traffic was maybe half of what it once was. The sense of calm as compared to before was eerie. 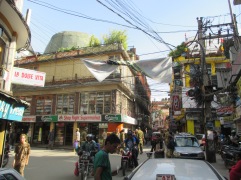 Stores in other parts of Thamel were beginning to re-open

The main historic attraction in Kathmandu is the UNESCO World Heritage-listed Durbar Square, a collection of temples and palaces that was one the home of the Nepali royalty. We spent a whole afternoon exploring the different sights.

The earthquake did a great amount of damage to Durbar Square. We didn’t make it back to see for ourselves, but the pictures we have found online show the devastation.

This temple, built in the 12th century, is what gave Kathmandu its name. To us it felt a little bit more like a pavilion, with a large awning sheltering an open space with a few shrines. 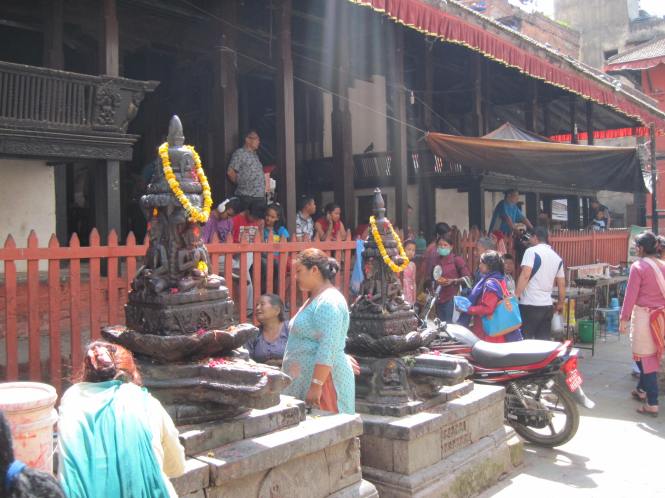 From news reports, it appears that Kasthamandap has been completely destroyed. 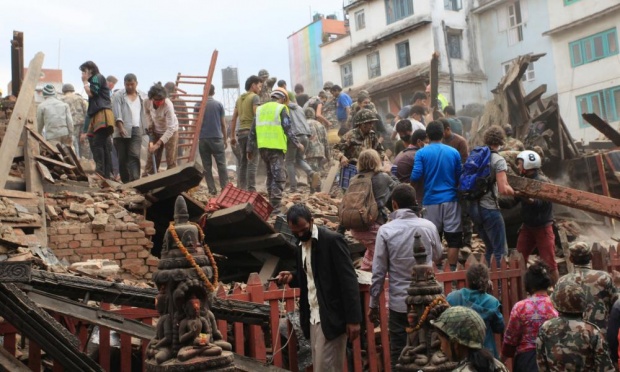 Not our picture – photo source http://www.theguardian.com/world/2015/apr/27/nepal-earthquake-destroys-kathmandu-valleys-architecture-buildings-heritage. Note the same two statues as in our before picture.

This tall Hindu temple dominated the center of Durbar Square. We joined the crowds of locals at the top and used it as a nice platform to rest our legs and watch the buzz of activity in the square. 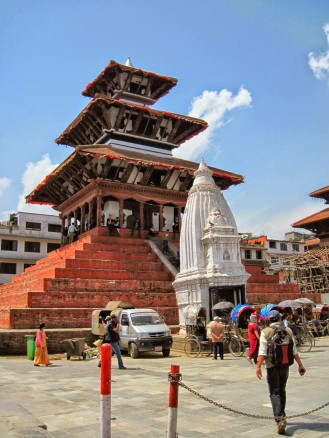 Maju Deval from below 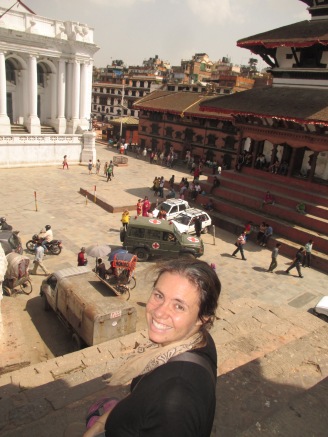 Sitting on Maju Deval under the temple. The white building is the palace. Also visible are the Kumari house and the Narayan temple

The Maju Deval was completely destroyed in the earthquake, and only the platform remains.

The platform on the right is Maju Deval. Photo source http://abcnews.go.com/International/nepals-historic-landmarks-earthquake/story?id=30615475

The view from where we were sitting. Photo source http://www.theguardian.com/world/gallery/2015/apr/29/nepal-earthquake-kathmandu-before-and-after-in-pictures

Near the entrance to the square’s museum was a small area with more temples and a large column with a statue on the top. The statue is a representation of the famous Nepali king from the 17th century. 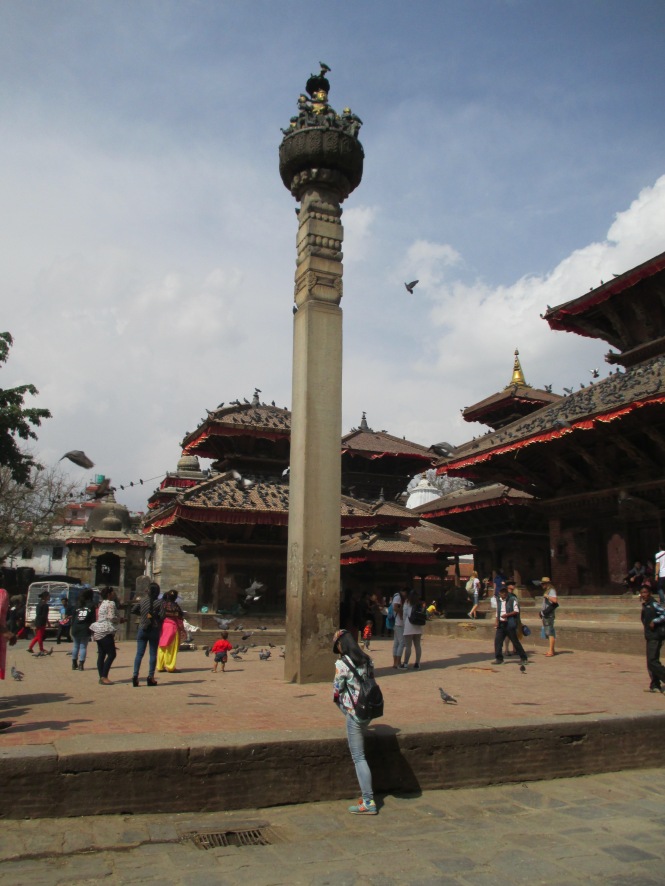 The column with the statue of King Pratap Malla on top

During the earthquake, the statue fell off its pedestal, but it appears that the surrounding temples are standing. 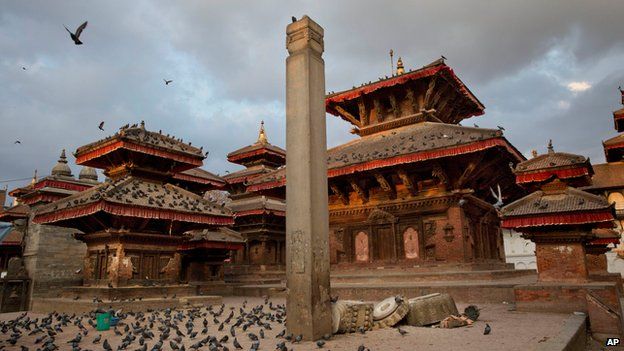 In the center of the Durbar Square area is the Hanuman Dhoka complex, which contains the buildings that make up the Royal Palace. We visited the museum here, which was a collection of dusty artifacts from the last kings of Nepal (before the monarchy was dissolved). Inside the complex were a few nice courtyards. 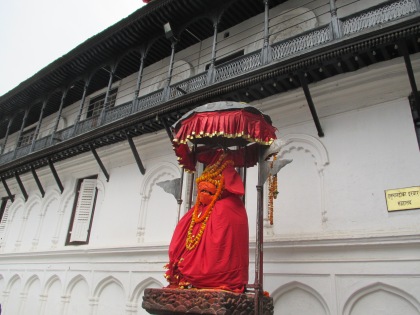 Statue of Hanuman that gives the complex its name. It is covered in orange goo put on by devotees

Jelfie in one of the courtyards

It’s a little hard to figure out what happened to this complex during the earthquake. It sounds like there was major damage, but it is still standing. A few of the towers collapsed though. You can see some of the same scenes in this video:

We took an afternoon to walk out to this Buddhist temple located on a hill overlooking the city. The final climb up the steps was pretty strenuous, but definitely worth it! The iconic face of Buddha stares down at you from the stupa above. There are many other pieces of sculpture with both Buddhist and Hindu themes. On both the walk up and down we saw a few of the monkeys that give the temple its nickname of the “Monkey Temple.” 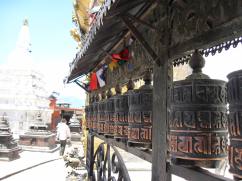 Prayer wheels. Spinning one sends a prayer up to heaven 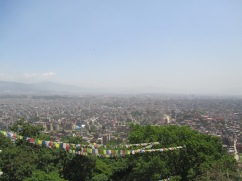 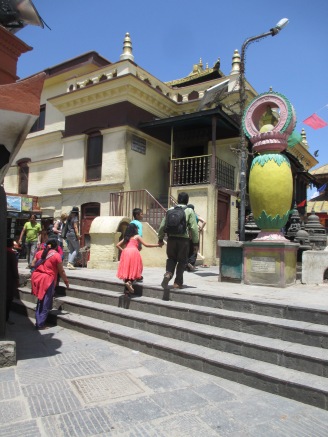 Swayambhunath was damaged during the earthquake. The large stupa itself looks ok, but many of the buildings surrounding are in ruins.

Note the same fruit sculpture as in our picture. Source: http://www.npr.org/2015/05/03/403982304/in-nepal-efforts-underway-to-salvage-ancient-sites-damaged-by-quake

As in Myanmar, part of the fun of visiting Nepal was retracing the steps of Della’s parents on their round-the-world trip. Their favorite restaurant in Kathmandu was Utse’s, a Tibetan restaurant. We were happy to see that it was still there and was even in the Lonely Planet. We went there for dinner and enjoyed our Tibetan meal. We went back to check on it after the quake; the building seemed intact but they were not yet open for business.

Enjoying the Tibetan set plate with delicacies such as steamed momos

Another dining highlight was a bit of a splurge for us. We had a nice dinner at the Thamel House, located in a charming old building. What drew us here was the free dance show that went on throughout our meal. This time we got a Newari set meal, and got to sample local specialties such as dal bhat and other curries. When we walked by after the quake, it seemed like the building was in good shape and they were re-opened already. 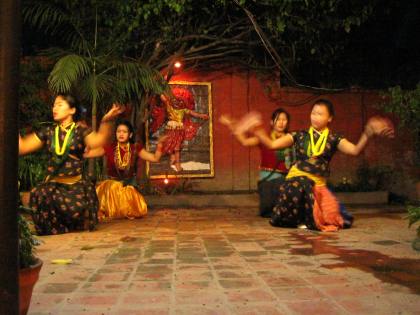 If you had asked us before the earthquake, we probably would have said that we found Kathmandu to be a bit dusty, crowded and chaotic, but at the same time a fascinating place to explore years of history and an intriguing culture. But now with the damage that the quake did to some of the sights we saw, we just hope that this city can recover and rebuild to allow others to see and experience this treasure for themselves.

8 thoughts on “Kathmandu: Before the Quake”