It was 6:30 am on the morning of April 24, 2015. We had just been dumped out of our taxi at the Kathmandu “bus station” where we would catch our Super Deluxe Bus to Syabrubesi, which was the start of our 8 day trek through the Langtang Valley.

At the time, we were overwhelmed by the cacophony of noises and abundance of smells at the bus station. Finding our bus was a challenge. At the time, the bus ride seemed like a fun, long and uncomfortable adventure. Now we know it was the beginning of a fateful journey that not everyone survived. 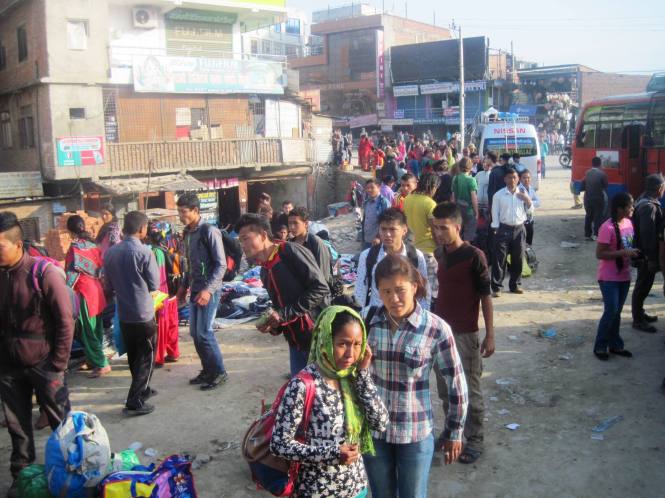 That morning, we had woken before dawn to do our final preparations for our trek. We had to wake the manager of our hotel to check out and leave our bags. We found a taxi which zipped us off to the “bus station” as the sun was rising. We were glad that we had been told to travel there the day before to purchase our tickets as it saved us some time and confusion. Even so, we didn’t know quite where to head.

There were many buses there, though not a lot of identifiable signage. We knew we had purchased the Super bus, which we had been told would be a faster ride. We did see several other tourists in the area and asked most of them where they were heading and which bus they were waiting for. Later, we would come to know most of these tourists extremely well.

Finally, through some help from local vendors we saw our bus trundle in to the “station.” We were surprised to see that the roof rack was completely full. We jumped onto the bus and took our assigned seats, A1 and A2, right at the front. We were even more grateful that we had purchased the day before as the rest of the passengers started to file onto the bus. Those who joined us were a group of 6 independent trekkers, a group of three Israeli trekkers and their guide, a single Israeli trekker, and two Israeli families (3 young children each!!), their guide and 3 porters. The aisle was full of bags which made it a climb to get to the seats behind. It also meant that all of us had to ride with all of our bags on our lap. Somehow there had been some errors made in the selling of the tickets and there weren’t enough seats. As you can probably imagine, this made for a pretty uncomfortable ride. 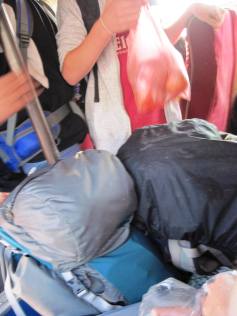 Despite it all, we were excited. This was going to be a big adventure and we were anxious to get our first views of the majestic Himalayas that would be our home for the next several days. The driver pumped up the music, and we were off.

The Super Deluxe ticket that we purchased had promised a faster ride than the local bus. So, were a bit annoyed when we had to stop over and over again. First for a bathroom break, then for “lunch” at about 10 am, where we were asked to make photo copies of our TIMS cards. Then 2 more times for checks of our paperwork by the Nepal army and the Armed Police Force- luckily, the photocopies sufficed for these. 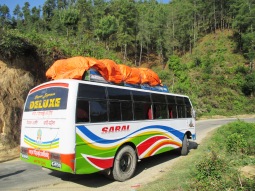 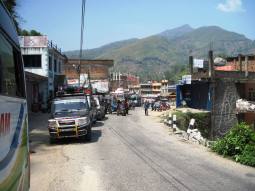 We stopped in the town of Dhunche and unloaded the bus. It turned out that the roof and aisle had been full of food and supplies destined for this village. 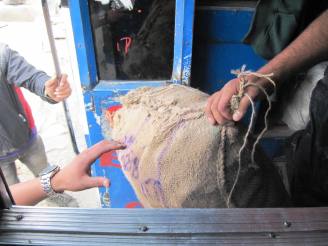 We stopped again at the entrance of Langtang National Park where our paperwork was checked by the park staff. Only 15 min later, we stopped yet again, for our paperwork to be checked by the police. We wondered how many different forces were in Nepal and how many more times our paperwork could possible be checked. Especially since the bus had been traveling all day on a one lane road on the side of mountains. There didn’t seem to be a lot of changes that could happen between each check. 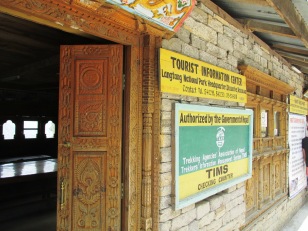 We arrived in SyabruBesi at around 2:00 pm where we were dropped off at the beginning of town. We expected to be attacked by touts hoping to lead us to hotels… But there was no one. In fact, we entered a hotel and could not find a manager of any sort to check us in, so we left.

We did eventually settle on SuryaPeak Guest House because it had a balcony with a nice view over the town and the beginning of the Langtang Valley. We paid 2 dollars that night for accommodation. We read on the balcony, enjoying the crisp mountain air. We went down for an early dinner and our guesthouse prepared us fresh momos and a large plate of dal baht. We had been concerned that we hadn’t been drinking enough water, so we decided to go for a “medium” pot of tea. We were shocked with the “medium” pot seemed to hold about two liters! 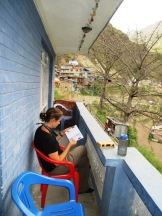 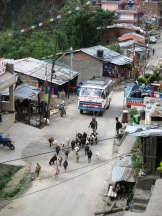 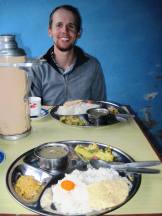 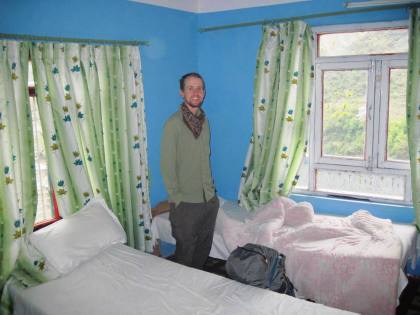 It’s hard to really explain this part of our journey now. So many things that seemed important at the time, like the long and uncomfortable bus ride, the scary views out the windows, and the silly mistake of ordering too much tea seem so inconsequential now.

The bus ride introduced us to some people who would become very important to us over the next few days. It also introduced us to Or Assraf (standing on the far left of our picture below) who would start his trek the same day we would start ours. He would be trekking alone and would experience the earthquake somewhere on the trail. He wouldn’t be as lucky as we were. He would be missing for several days following the quake and later his body would be found at the bottom of a cliff. We did not know him well, probably only said a few words to him on the journey, but we will never forget him. We can’t imagine the fear he must have felt during the earthquake that he must have experienced all alone. Our hearts go out to his friends and family who spent a week in trepidation and had their fears confirmed a few days ago. Or was only one of the more than 7000 people who died during this tragedy, but his memory will always be with us.