Eric is a big sports fan, so on our round-the-world trip he was able to seek out a few local sporting events. He was excited to check out a baseball game while we visited Japan on our honeymoon, since baseball is one of the most popular sports in the country.

The way our itinerary worked out, the best chance for us to see a game was to go to a Hanshin Tigers game – they were playing at their stadium outside Osaka while we were in Kyoto. Koshien Stadium is one of the most historic baseball stadiums in Japan (built in 1924, and visited by Babe Ruth in 1934), so Eric was excited to be able to check it out.

Ivy covers the outside walls of the stadium, reminiscent of Wrigley Field

We purchased seats in the cheap outfield section (see below for details). As an added bonus, they were running a promotion for the game we went to, and we each got a free replica jersey as we went into the game! 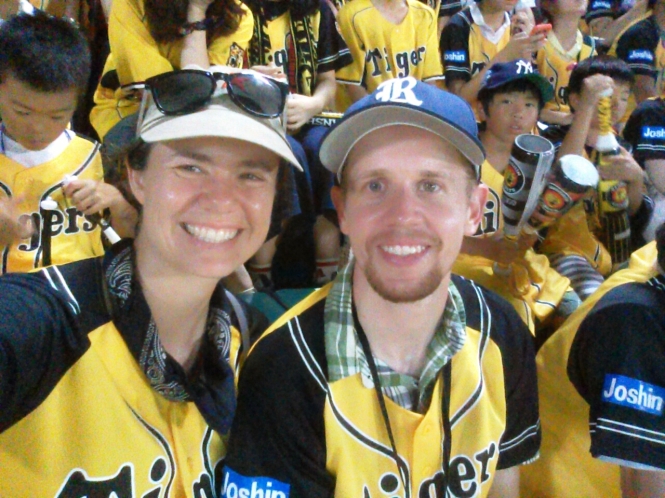 The game experience was just as exciting as we had been hoping for! Even though it was just a regular season game between two teams with mediocre records, the stadium was packed, and then fans are very into the game.

The biggest difference in attending a Japanese baseball game is how the fans interact while watching a game. While their team is at bat, the fans are constantly singing/chanting. The songs they sing are specific to the player up to bat as well.

The singing is coordinated by leaders at the bottom of each section (similar to the yell leaders at Texas A&M).

One of the most unique songs was for Mauro Gómez, the first baseman for the Tigers. Japanese teams are only allowed four foreign players on a game-day roster, and Gómez was the main one we noticed for the Tigers. He is known for hitting home runs, and we could hear the word “home run” in the song (we didn’t quite capture it in the video). The fans definitely seemed excited about the foreign players – they had special fans with their pictures. Eric was told by a fan that he looked like a famous Tigers foreign player Matt Murton.

The visiting team, the Chunichi Dragons (from Nagoya), had their own designated fan section near where we were sitting. While the Dragons were up to bat, the Tigers fans would sit quietly and the Dragons fans would start up their own cheers. They were pretty loud as well!

The Dragons fans are wearing blue and white

We were able to find some ballpark food that felt like something you wouldn’t get at a US game. Eric got yakitori skewers – two of chicken and one of squid. Della got udon noodles! There are tons of beer sellers (all female) wandering the stands, but we ordered beer from the counter since we weren’t sure we would be able to communicate well from our seats in the middle of the row. 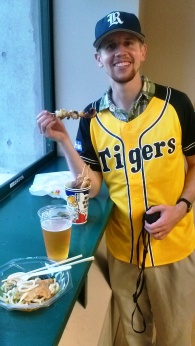 Our seats gave us a nice panoramic view over the action and the mountains behind the stadium, especially as the sun set.

We thought it was fun that they use carts to smooth the dirt infield, and that they use a bullpen car to bring in relief pitchers. 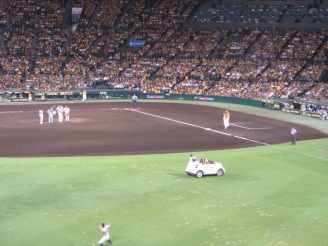 The most impressive fan activity by far was the seventh-inning stretch. During the top of the seventh inning, the Tigers fans all started blowing up these long, skinny balloons with a plastic piece on the end. We hadn’t known to buy these balloons, but another fan was kind enough to give us one each. 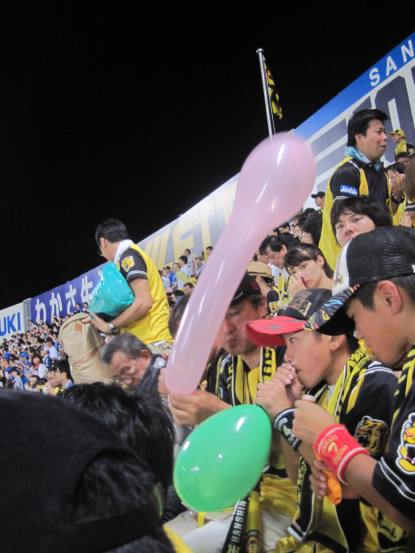 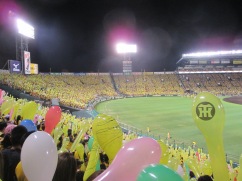 Then, during the seventh inning stretch, a song was played, and at the end everyone released their balloons. The sky was filled with balloons, each of which let off a whistling sound as the air rushed through the plastic piece. A really fun communal experience!

It was a close game throughout. The Dragons took an early lead on a big home run. The Tigers threatened multiple times but never could put together enough hits, and ended up losing 3-1. We were bummed not to get to see a win, but still were very glad that we took the time to experience this!

There are third-party services that will buy tickets for you, but we found instructions on the Tigers website that were quite easy to follow, found here. You have to use a site that is only in Japanese, but that page will tell you which buttons to click. We chose the cheap outfield seats. The end result was a QR code that we took to a booth at the stadium on game day to get the actual tickets.

Getting There and Away

The game we chose was on the evening of the day we arrived in Kyoto. We were running a bit late getting into Kyoto (more on that in the Kyoto post), so we had to rush to get down to the game. It required a few transfers but ultimately wasn’t too hard. The steps to get to Koshien Stadium (the Tigers’ home stadium) were:

From the station, it is just a few minutes walk to the stadium.

Getting back to Kyoto from Koshien Stadium just required doing the above steps in reverse. The biggest hangup was that basically everyone in the stadium takes the train to get there, so there was a huge crush of people to get into Koshien Station – we probably had to wait at least 30 minutes before getting onto the platform. Both that train and the train from Osaka to Kyoto were standing room only.