We were excited to head to the Mt. Fuji area after spending some time in Tokyo. We had decided early on that we probably weren’t interested in climbing Mt. Fuji during this trip, but Della was pretty adamant that she wanted to at least view it. We decided to head to the Hakone area which has several small towns that are known for their hot springs resorts (onsens) as well as views of the iconic Fuji.

We used our Japan rail passes, which were incredibly easy and useful, to catch a train from the Okachimachi station near our Airbnb in Ueno to Tokyo Station. From there, we were able to take shinkansen (or bullet train) to Odawara which was only about a 30 minute ride. We had originally planned to just grab lunch in Odawara before switching to a bus to bring us to Hakone, but we realized that we were running considerably earlier than we had planned. We couldn’t check in to our accommodation until later in the afternoon, so we did a quick search of the lonely planet and realized the Odawara castle was in walking distance of the train station.

As we noticed in many train stations (and bus stations, and almost any transit stop), lockers were readily available to store bags. They weren’t necessarily cheap (about $5) and it took us a little while before we found a locker that was big enough for us to stuff both our large backpacks into, but we figured it was worth it!

We headed out and followed our phones (and a few signs) to Odawara Castle. The castle itself was lovely, very typical of castles throughout Japan. It was originally constructed in the mid-15th century but, like most castles in Japan, was destroyed by an earthquake. It was reconstructed in 1960, so it was in really great shape. We paid to enter the castle and climb to the observation deck on the top. Each floor had some museum displays, but much of it was only Japanese. The view from the top was quite beautiful though!

After returning from the castle to the train station, we had a quick udon meal and headed outside to catch the H-Line train all the way to the town of Ashinoyu where we were staying for the night. We were quite pleased we had managed to successfully add a couple hours of sightseeing to our day!

Stay in a Ryokan

One of the things that we were quite excited about when planning our trip to Japan was to stay in a traditional ryokan. A ryokan is a Japanese style inn. We were intrigued by the possibility of diving a little deeper into Japanese culture. Ryokan are known for incorporating tatami floors, futon beds, and Japanese style baths. They are especially popular in hot springs regions like Hakone. They range in price, but we planned to live it up a little on our honeymoon and picked one that was on the fancier side: Kinokuniya Ryokan. We were especially excited because we knew that it would provide Japanese style private hot springs (onsen) baths.

We enjoyed the traditional and large room full of tatami mats and Japanese art. The ryokan provides special robes called yukata which you wear pretty much throughout your entire stay. We enjoyed putting them on and learning how to tie the obi belt.

One of the first things we did was to take advantage of our free 30 min private bath experience. We were lead outside to a separate small structure where we enjoyed the option of two lovely, warm hotsprings baths. 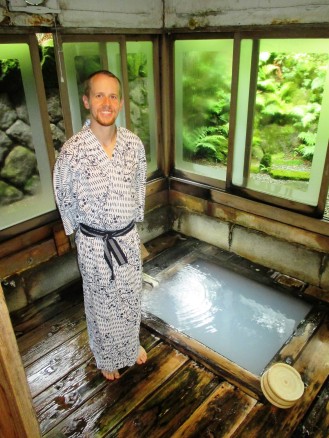 After heading back to our rooms, we got ourselves prepared for the provided dinner at the ryokan. Luckily, we didn’t have to do much as we were going to go in our yukata robes! Somehow we forgot to take our cameras or phones, but the meal was amazing. It was about 15 courses which included everything from soup to noodles to sushi. We did save the menu:

While guests are at dinner, workers from the ryokan enter the rooms and set up the traditional Japanese futons for sleeping. We spent the evening reading, researching, and generally enjoying our accommodation.

We took a trip to the public onsen as well. Japanese public baths are quite fascinating. You enter a large bathing room (one per gender) which includes one large (in this case hot spring water) pool. Around the outside of the room are individual shower stations. Traditionally, you wet yourself with water from the pool, cleaning your body, before you take a short soak in the pool. You then use the small stools in each shower station to wash. Shampoo, conditioner, and soap were provided. After you are clean, you can take another soak in the hot pool. We were a little nervous about trying this as it was traditional to be naked. But, we were fortunate in our first public bath experience that were both alone in our baths. 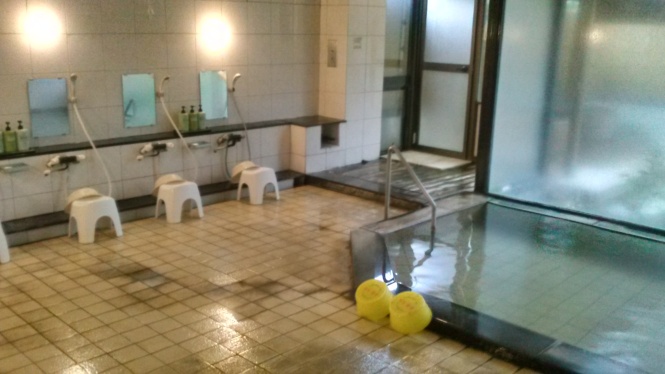 There was one scare for us that evening though: at about 11:30 PM, right as we were getting ready for bed, we were both shocked to feel the ground shake. We were both terrified for a moment as we realized we were experiencing another earthquake. There seemed to be no commotion inside the hotel, no emergency actions of any sort, and everything seemed to be fine. We did a quick bit of research and found that there had been a 5.3 magnitude quite a ways north of us. We did find out that there had been very slight damage in Tokyo, but no one said a word about it at any point. It was clear that these are normal occurrences in Japan.

We enjoyed the included buffet breakfast at the ryokan before heading out the next morning.

There seemed to be a typical tourist loop of sights to see in the Hakone region. We had purchased the Hakone Free Pass the day before which allowed to ride all of the buses, cable cars, and boats in this loop for no additional charge. We had stayed in the very small town of Ashinoyu which was on the east side of the loop. We headed back north to the town of Gora where we dropped our bags off at Ryokan Oyado Hakone Hachirinoyu. This was another, considerably less fancy, more western, ryokan. We walked to our first stop, a short but humid trip.

This is a large park like area which houses hundreds of statues and other kinds of outdoor art. We were intrigued by many of the sculptures as well as the Picasso building which is home to many of Picasso’s works. We spent several hours wandering around and still felt like we could have seen more. 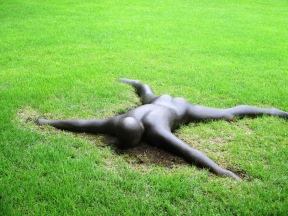 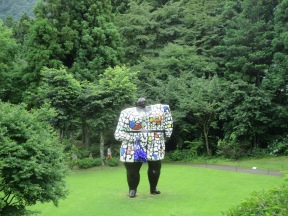 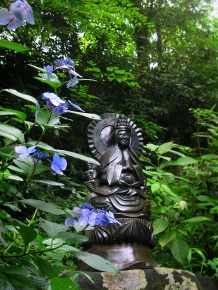 In one area, there were hundreds of spiders weaving webs in the foliage. Della, in particular, was fascinated with watching them work building absolutely perfect webs. 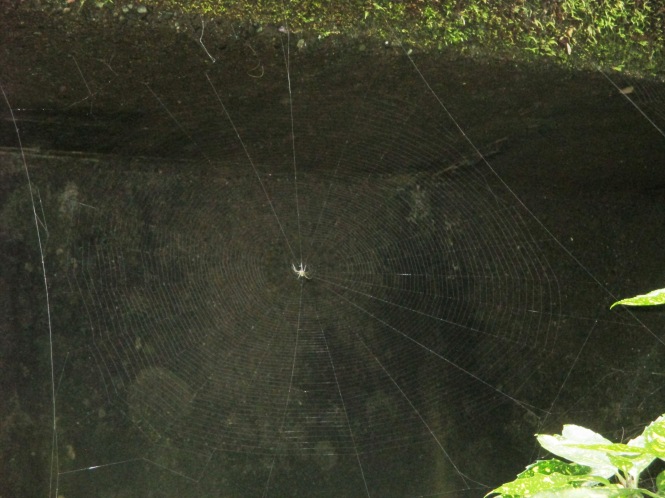 Near the end of our time at the Open Air Museum, we were excited to find a free hot springs foot bath. It was a great pick me up for our “museum legs.”

After leaving the Open Air Museum, we got on a short cable car railway which took us back to the main station of Gora. From here we transferred to the Ropeway. We enjoyed the scenic ride up to Owakudani volcano. We were quite excited because up to about 2 days before we arrived Owakudani was closed. Owakudani is the area around the crater from the last eruption of Mount Hakone. It had been spewing a lot of sulfuric gas, so much that it had been closed to the public. While it was now safe enough to visit, there was still a lot of gas in the air so they gave everyone a wet towel to breathe through if needed.

We enjoyed viewing the crater, though it was difficult through the clouds and gas.

The most exciting part however was eating black eggs. Owakudani is known for hard boiling eggs in the naturally hot water of the crater. The shells are blackened by the sulfur. Eating one is supposed to prolong your life by seven years. We purchased and ate 5! 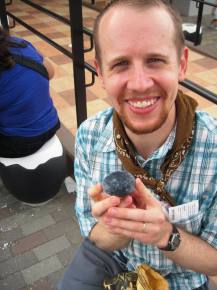 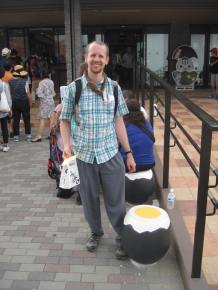 On a clear day, you can see Mount Fuji from Owakudani, but this was not a clear day.

This view was actually from the top of the volcano, but it adequately demonstrates how little we could see. This is where we were supposed to see Mt. Fuji.

This is what we actually saw.

We got back on the ropeway and proceeded to the next stop.

The ropeway deposits tourists at a small town called Togendai where you transfer to a sightseeing boat across the lake. We actually just missed a boat so spent some time reading in the station while waiting for the next one. The sightseeing boat is decked out like a pirate ship which seemed a little odd to us. 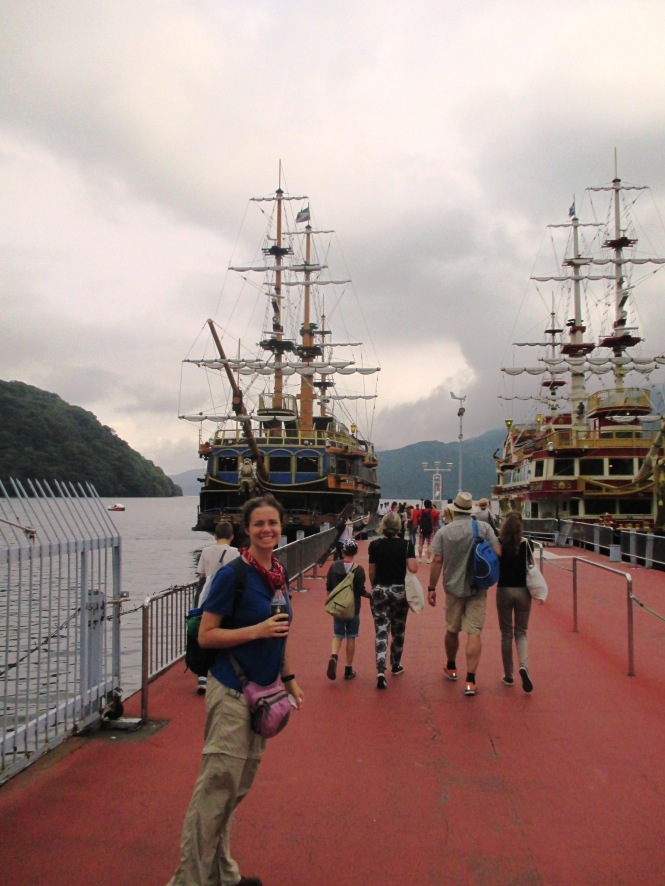 We got off the boat at Hakone-Machi hoping to visit the Hakone Checkpoint, but it seemed to be closed for the day so we headed on.

We walked along the ancient highway to Edo (Tokyo). There is a short section of beautiful cedar lined path. It was lovely to walk along and imagine the shoguns passing along this same highway.

After walking along for awhile, we were able to get back to the main road and take a bus along the final part of the loop back to our ryokan.

We quite enjoyed our time in Hakone. Primarily, we enjoyed the honeymoon experience of staying in the ryokan. We wish the weather would have cooperated a little bit more during the rest of our sightseeing experience!

One thought on “Honeymoon in Japan: Hakone”