We explored the Bay of Fundy along the Canadian province of New Brunswick as part of our 2 week trip to New England and Canada. We rented a car in Boston and then traveled through parts of Maine.

The overland border crossing from Maine into New Brunswick was quite easy. We had no wait and were asked only very general questions about where we were going and coming from.

Our first stop in Canada was St. Andrews by-the-Sea. We had rented a room at the Salty Towers on Airbnb. It was a large old house that felt a lot like a hostel (not a “party” hostel though, more for older travelers). Our room had a private bathroom and they had a pack n play for us!

As we were driving into town, we saw a lot of people wearing red and a lot of Canadian flags out, so we thought that it was either a very patriotic town or something special was going on. As it turns out, just by coincidence we had arrived on Canada Day! We walked the main drag in downtown and it was just alive with people strolling up and down in their patriotic gear. The energy was great! However, it was a bit hard to find a place to eat with a table available and a high chair. We eventually settled on Water St Diner. We shared a poutine for an appetizer – fun to be back in Canada! After finishing dinner (and exploring briefly a Canadian Dollar Store), we paused in the main square to listen to some music. They had several kids come up to Floss to the music which Della thought was hilarious. 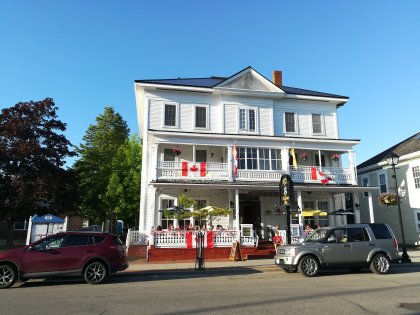 Once we were back in our room, we got ready for bed, but then a fireworks display started. We had an excellent view from our bedroom window so watched for awhile. Unfortunately, it did mean that Kiddo had a little bit of trouble getting to sleep and stayed up quite late!

From St. Andrew’s we took the 2.5 hour drive to Fundy National Park. The drive into the park was scenic, but before doing anything in the park itself, we continued on just past the park into Alma to eat lunch. We were a little disappointed with our lunch choice. The Octopus Garden had a very long wait for our food to arrive. We actually ended up having to take Kiddo outside for awhile because it took so long and he was getting antsy. It also, unfortunately, cut into our time for exploring the park.

After lunch we did a quick stop at the Visitor Center and decided that we only had time to do part of a hike. We ended up doing the first half of the Matthews Head hike which took us through dense forest out to a viewpoint over the bay. We took a few minutes to sit in the classic red Adirondack chairs to contemplate life. Then we headed back. Kiddo rode in a baby carrier for the way out and then did a bit of walking himself on the way back. Unfortunately, we only scratched the surface of Fundy National Park on a day that was a bit cloudy.

After spending a few days exploring Prince Edward Island and Halifax, we returned to the Bay of Fundy. The Bay is know for its extremely high tides, so we were excited to check out Hopewell Rocks. We rushed in, driving the approximately 3 hours from Halifax, hoping to arrive before high tide. Our timing was actually quite good. At lowest tide, you can apparently walk about 250 yards out on the sea floor. We arrived with about an hour left of access to the ocean floor. The Hopewell Rocks themselves are distinctive rock formations. We walked down to explore around them by foot. As the time passed, we enjoyed watching the water come closer and closer, until, eventually it got so high, we had to exit the sea floor and head up several flights of stairs to re-access the trail on the cliffs above.

When we arrived on sea floor

tide farther in after we climbed up 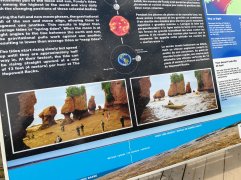 The difference in high and low tide!

Back at the main visitor area, there was a playground. We let Kiddo play for awhile and we all ate a picnic lunch before we headed off for our afternoon drive to Saint John.

We arrived to a heavy covering of fog. Right after we got checked in to our hotel, the skies opened up and it began to pour. We had been hoping to walk into downtown for dinner, but chose to drive to avoid getting soaked. It was a frustrating drive- while only a mile away, we made multiple wrong turns! And, due to the way the roads went and some construction, for every wrong turn, we had to essentially come all the way back to the hotel and try again! We were all getting quite frustrated and hangry!

Dinner was at St. John Ale House which we enjoyed OK, though it was a little slow for a frustrated family with a toddler. Della got a blueberry ale which was quite delicious and Eric enjoyed a taster tray of local ales. The food was tasty. 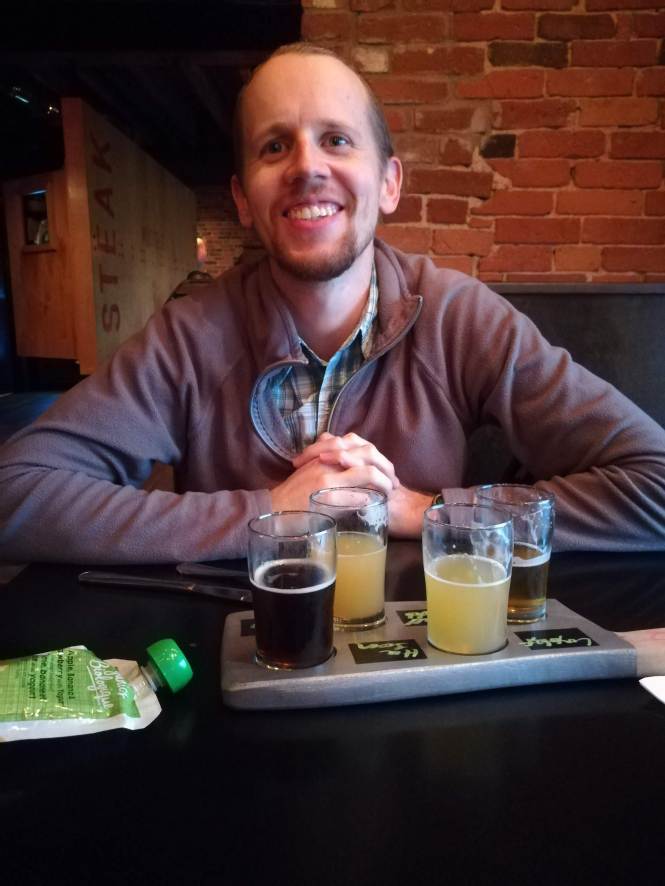 Even though it was almost dark at this point, we had checked the tide charts, and we had only one potential chance to see the famous Reversing Falls. Because the tides are so high, the river flowing into the bay actually reverses direction at high tide. We thought we arrived within 30 minutes of high tide, but the river still seemed to be flowing into the bay. We were too tired to stick around. We later read that the reversing might only happen at the very highest tide for a few minutes. We were bummed to miss it. 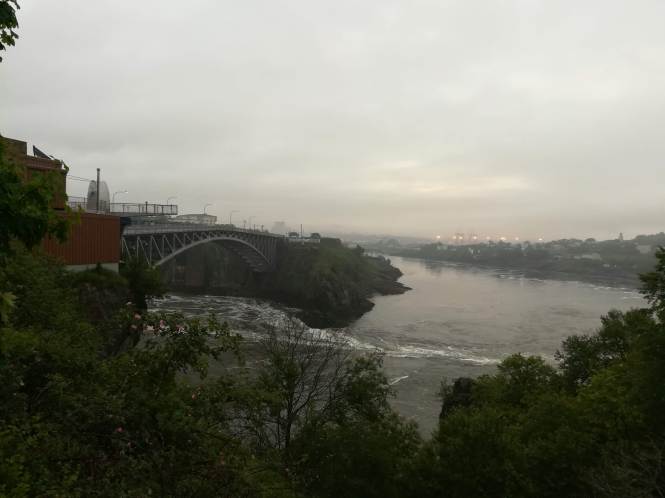 still appears to be flowing downstream…

The following day was lovely and sunny! We walked back into downtown for some sightseeing. We walked along the Harbour Passage trail into town from our hotel. It was a lovely walk along the Bay full of joggers and bikers. We particularly enjoyed walking next to the fragrant rose bushes planted all along the way. We decided to take a self-guided historic tour we found online here. We took the Prince William Walk which helped us explore the merchant heritage of Saint John. Some of the highlights were a Market Square, the old city hall, and several old banks. All the buildings were beautiful and we generally enjoyed the ambiance. We ended up at the “Three Sisters” light fixture where we took a jelfie before heading back up Germain St. Kiddo enjoyed doing a little bit of walking on his own. It was fun learning a bit of the history- apparently Saint John was essentially built by loyalists to Britain who escaped from the USA after the American Revolution.

We enjoyed our time along the Bay of Fundy – especially exploring St. Andrews and Saint John!

We had been planning on bringing a pack n play with us on this trip. We have a nice one that is quite light and packs into a bag that can carried on our backs – As far as pack n plays go- it’s a great one for travel. However, the more we thought about it, the more we knew we just didn’t want to carry it. It is another piece of luggage that would take up space on our backs getting to and from the airport, and in the our possibly compact car. Della had joined several Traveling Family facebook groups before the trip and she heard about a baby tent! We purchased a Kilofly Pop Up Portable Baby Travel Bed. There are many of these out there, but we chose this one because it came with a pad. Originally, we thought we would put this on the floor and it would contain Kiddo a little bit. As we went on, we ultimately decided that the pad wasn’t padded enough so throughout the trip we put the tent on cushions, a mattress on the floor, and a folded blanket. In several hotel rooms, we had 2 beds so we put it on the other bed. He rolls a lot in his sleep and could crawl out of the tent if he tried, so we often barricaded it on the bed with other luggage. This made us nervous a few nights, but ultimately, it worked really well! AND, it folds up so small, you can just pop it in your suitcase!

We bought and used a LOT of milk on this trip. Kiddo was at a stage where he was done with nursing/formula but still counting on milk for a lot of his calories. Because we were often driving all day, the milk would be in our hot car. We brought a folding cooler with us on the trip and were so glad that we at least had a way to try to keep the milk cold! We did purchase a small ice pack at one point, which would have been nice to have the whole time.

This was our first international trip with Kiddo! It was also the first trip we were to embark upon with him where we were not completely visiting friends/family or taking family with us. We were a bit nervous, but ultimately, it worked out really well!

At this point in time, Kiddo was still taking two naps per day – though to be fair, he mostly didn’t need them both. We were holding on to the 2nd nap because we liked it for ourselves! However, it did give us an outline for how we would plan this trip. Initially, we decided to fly to Boston because there was a direct flight on Southwest. (We currently hold a companion pass!) We knew we had a few friends scattered throughout New England that it would be fun to see. We also each had a few states up there that we had not been to. In addition, we saw that you could easily drive up to Canada, and in particular, to Prince Edward Island (PEI). We were excited that Kiddo could cross an international border and Della has been a fan of Anne of Green Gables so has always wanted to get to PEI. We decided to plan around those locations. We knew that Kiddo would nap in the car in the morning but then need something to interest and excite him in the afternoon before he would sleep in the car again in the afternoon. So, our goal was to never drive more than about 3 hours at a time and to always pick somewhere interesting to be in the middle of the day.

The 2 week itinerary was as follows:

We really enjoyed the trip and our strategy of having Kiddo nap twice a day in the car worked almost flawlessly!