Our second stop in Greece was the town and archaeological site of Delphi. The Ancient Greeks considered this area to be the center of the world, and the best place to worship Apollo. Dignitaries would come to the Temple of Apollo at Delphi to get advice on big decisions from the priestesses located here. We weren’t planning on getting any advice, but we hoped to see the plethora of structures left over from when Delphi was such a prime destination.

We knew that it was possible to get from Meteora to Delphi by bus from Lonely Planet, but the instructions were vague so we were a little nervous. We talked with the bus office the day before, and they said we needed to start early to make it all the way. Luckily, on the day of the journey two fellow travelers were intending to make the exact same journey, so we all did it together, which made it go more smoothly and quickly. (Look for a Connections post coming soon…)

The sequence of buses ended up being:

We didn’t end up getting to Delphi until about 4:30 PM, so definitely a long day of travel!

We hadn’t pre-booked anything before arriving in Delphi because we weren’t positive we would make it in one day. So, we arrived without a plan, but our travel friends were headed to a place that sounded good so we tagged along and got a room at Hotel Athina. The room was nice, but we had a shared bathroom that was a little rustic, so after two nights we switched (along with our travel friends) to the Sibylla Hotel, where we had our own bathroom. Our favorite feature of both rooms was a nice balcony with a great view over the valley below. 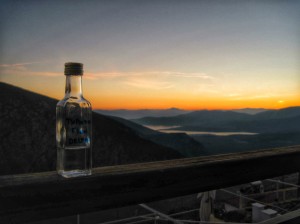 The Delphi Archaeological Site and Museum – This is the main attraction in town, so we tackled this the first day. We bought a combination ticket to both the outdoor site with the ruins and the museum which houses a lot of the sculptures found at the site. We toured the site first.

The biggest part of the site is the sanctuary of Apollo, the big destination for those coming to consult the Oracle. Delphi was an active site from at least the 8th century BC up until the 4th century AD (meaning even the Romans kept the site active). Since it was such a popular site, many of the different Greek city states built “treasuries” containing offerings to Apollo to thank the oracle for her advice. The most well-preserved of the treasuries is the Athenian Treasury, built by the Athenians to commemorate their victory at the Battle of Marathon.

Looking up at the site from the entrance to the agora

The ancient Greeks believed that Delphi was the center, or navel of the world. Conical stones like these were used to represent the navel

Failed jelfie in front of the Athenian Treasury

Why did this cat pay for a guided tour if it wasn’t going to pay attention?

The main attraction in the sanctuary was the Temple of Apollo. The oracle would sit in the middle of the temple over a natural fissure in the rock and speak in tongues. Priests would interpret the words for those who came to ask a question. (Some say that there were hallucinatory vapors coming from the fissure). There isn’t much left of the temple but it is still fun to imagine walking up the ramp and waiting to ask your big question.

The Temple of Apollo from below

Jelfie in front of the entrance to the temple

Delphi was also the host site of the Pythian Games. Similar to the Olympic Games, these were gatherings of all the Greek peoples every four year to compete in various contests. The stadium where the athletic events took place is at the top of the hill. The Pythian Games also included artistic competitions; a large theater used for these can be found at the site as well. 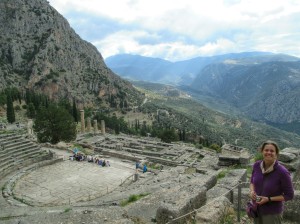 The theater from the top row of seats

The remains of the stadium from the Pythian Games

Apollo was the main god being worshiped at Delphi, but there was also a smaller area with structures dedicated to Athena. This is just a few minutes walk further down the road from the main site. The most iconic ruin here is the Tholos, with its three reconstructed columns. They haven’t actually figured out what its purpose was.

In front of the Tholos 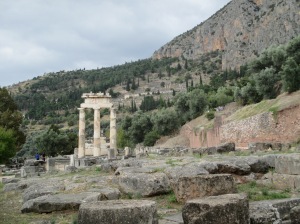 After we finished visiting the ruins, we headed into the museum where we got to see many of the actual statues. Here are some of the highlights:

The Sphinx of Naxos

The Twins of Argos

Herakles (Hercules) from one of the pediments. Rick Steves made us laugh by pointing out that he is wearing a lion skin “tied preppy-style around his neck.” Oh, Rick…

Another one of the navels marking the center of the earth

Hike Down to Itea – Most people only spend a day in Delphi, but the natural setting on the side of the mountain was great, and the weather was perfect. We had read about a hike in the Lonely Planet, and decided to spend a day doing it along with our travel friends. The hike goes from Delphi all the way down the to the Gulf of Corinth at a town called Kirra. This retraces (in reverse) the route that pilgrims coming to Delphi via sea would take once they had landed their boats.

The scenery for the hike was quite pretty.The first half descending down the slopes of the mountains and through the town of Chrissos provided great views over the valley and out to the Gulf. Then, the second half of the hike along the valley floor went through a giant olive grove -according to Lonely Plant the largest continuous olive grove in Greece.

Walking through the olive grove

Looking back up at where we came from. You can see Delphi as the collection of white buildings on the right

The trail was supposed to end in Kirra, but somewhere in the olive grove we took a wrong turn and ended up closer to the neighboring town of Itea. This wasn’t too bad though, because our main goal was just to find a beach, and Itea is also on the coast! We found a spot on the pebbly beach (not too hard since it is starting to be low season) and had a nice relaxing afternoon. The water was a little chilly, so we didn’t swim for too long.

The Gulf of Corinth

The town of Itea

Luckily, we didn’t have to backtrack and hike our way back up the mountain! Instead, we just took one of the local buses that whisked us back up there for a small fee.

Our Rick Steves guidebook recommended a few different tavernas in town. The first night we came across one and decided to give it a try. The food was pretty good, but the best part was the view of the great sunset from our table.

Two of the nights we spent in town, we found a cheap pita place on the upper street in town. Not as fancy of an ambiance, but definitely a good amount of food for the money!

We really enjoyed our time in Delphi. We knew that we would appreciate the archaelogical importance, but we weren’t expecting to be as drawn in by the natural surroundings as we were. The great weather every day helped as well. And to top it off, it made it even more fun to be able to share with new friends!

Leave a Reply to RTW Timeline: First Half of the First Millennium BC | Globe Gazers Cancel reply