After taking care of some business in Athens, we headed into the Peloponnese peninsula. Our first stop was Olympia, the site of the ancient Olympic Games.

Olympia is a small town, so it isn’t super easy to get to. But, we thought we had seen that there was a bus from Athens to Olympia at 1:00, so we aimed for that bus.

Getting to the bus station in Athens is actually a huge pain, since it is not located anywhere near a metro station. Google told us that we could take the metro and then a local bus, so we attempted that. We caught the metro as planned but then did not see the bus come. We were about to give up when it finally came. We hopped on, then realized it was headed the wrong direction! We got off and tried to head back to try again… and it started raining. We tried to catch a cab and none would stop. Talk about moments of misery. Eventually we did find a cab which took us to the station. In the end this was probably for the best, because by this time it was pouring, and the station was in the middle of a confusing industrial zone.

The ride itself was long but uneventful. We knew that most people were probably getting off at Pirgos, the biggest town near Olympia, but were pretty confident we could just stay on since neither the ticket agent nor the driver informed us otherwise. Instead, in Pirgos everyone got off and we were told that the bus ended there after all. The next local bus to Olympia didn’t leave for an hour and a half, so we had to kill time in the Pirgos bus station. We didn’t end up making it to Olympia until almost 8:30! 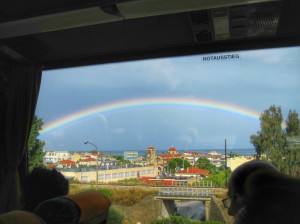 On a positive note, we did get to see this nice rainbow on the way

The “town” of Olympia has a very touristy vibe: it really only exists to provide tourist services for the ancient site nearby, so there isn’t much to speak of in terms of local flavor. We found a cheap hotel on booking.com called Anesi Rooms to Rent. We had a small but servicable room with a nice hot shower and a sizable balcony. The wifi was strong as well, so we spent our downtime drinking wine and watching some shows on the Internet. 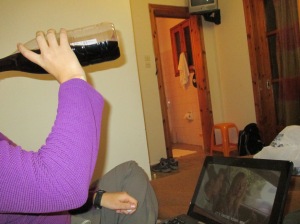 Bonus points if you can figure out which show we’re watching!!

Olympia Archaeological Site – Olympia was the host site for the ancient Olympic Games from the 8th century BC all the way until the 2nd century AD. These ancient games were not just an athletic competition: they were also a chance for the Greeks to pay tribute to their Gods. Therefore, the site has quite the collection of ruins, both for athletic and sacred events. 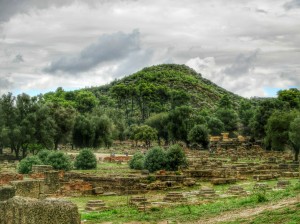 The sacred structures are concentrated in an area called the Altis. The oldest structure is the Temple of Hera, one of the older Doric temples in Greece. They still light the flame for the modern Olympic Games in front of this temple. The biggest temple is the Temple of Zeus. Only one of the giant Doric columns has been reconstructed but it is still quite impressive (you can still see pieces of the other columns that tumbled to the ground during an earthquake in the 6th century AD). Another impressive building is the circular Phillepeon, commissioned by Philip of Macedon (father of Alexander the Great).

Temple of Zeus with fallen columns

Remains of the Temple of Hera

Walking in the Temple of Hera

This is where they still light the Olympic Torch

The big stadium is still intact. It doesn’t look like a modern stadium in that the only seats are for the judges – the spectators would just sit on the sloping grassy hills on all sides of the track. One cool thing is that you can run on the track today. The old starting lines are still intact, so we took the opportunity to run back and forth between them (in the ancient games, they would run back and forth instead of running laps). Within the site, we also walked through the ruins of various structures built to house visiting dignitaries, and a large colonnaded courtyard within which the athletes would train.

On your marks, get set, go!

The training building for Olympic athletes

Olympia Archaeological Museum – As was the case at Delphi, Olympia has a separate museum where many of the sculptures and other artifacts found at the site. We were actually disappointed in the route that the Rick Steves guide suggested to take through the museum: the museum itself was laid out chronologically, but his tour took us randomly through the more important artifacts. After we finished his tour, we actually went back and did went through all the rooms again just to get a better sense of the timeline of events at the site.

Here are some of the highlights from the artifacts we saw:

The women the centaurs were trying to steal

Nike – goddess of Victory. She stood on a pedestal where the Olympic victors were crowned near the Temple of Zeus

Bronze Helmet of Miltiades. Miltiades was the Athenian general who beat the Persians at Marathon. A runner sprinted back the 26 miles from Marathon to Athens with the good news!

Hermes of Praxiteles, discovered in the Temple of Hera. Praxiteles was a master sculptor and Greeks and Romans copied this for generations.

We particularly liked Rick Steves’ description of this statue. “From the front he appears serene…”

“…(And, from the back, nice cheeks!” Yes, Rick Steves wrote that!

Since Olympia is such a tourist town, there aren’t many inspired dining options. We did end up eating out twice. The first time, we just went to the small restaurant next door to the Anesi (where we stayed) that is actually run by the same people that run the hotel – our waiter was the same person who checked us into the room. The second night we just randomly picked one of the tourist restaurants and got a pizza in order to take a break from gyros and souvlaki for a night. 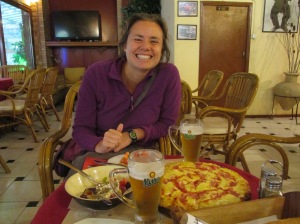 The ancient site of Olympia is very impressive. We especially enjoyed exploring the ruins once the large tour groups had left by mid-afternoon. The town of Olympia itself is not too exciting, so don’t plan on spending much more than a day or two. 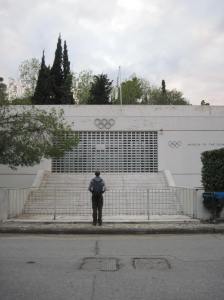