Most people in our generation probably think of the movie 300 when they hear Sparta, and think of this famous line from that movie. Sparta was our second stop on our trip through the Peloponnese, and while it isn’t very much like the movie, we did quite enjoy it. 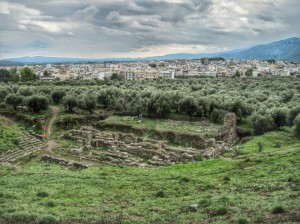 This is Sparta! No, really, this is actually the historical site of Sparta. And the modern town of Sparta beyond.

We knew that getting to Sparta from Olympia would be challenging, but do-able. While we were in the town of Pirgos on our long trip into Olympia, we confirmed that we would need to connect through the town of Tripoli. The worker also told us that there was a 12:15 bus that would do just that.

Armed with that knowledge, we decided to take a bus from Olympia back to Pirgos at 9:30, just to be safe. We got to Pirgos at about 10:30 and went to buy the 12:15 ticket… and were informed that the next bus that would be going to Tripoli was at 3:30. In fact, no one seemed to have any idea about the supposed 12:15 bus. When we asked, repeatedly, the answer was “The next bus is 3:30.” We were pretty bummed, but there wasn’t much we could do about it. So, we spent five hours in the Pirgos station reading and working on the blog (at least there was free Wi-Fi).

When we got to Tripoli at 6:10, we were pretty excited because we heard that the bus to Sparta was leaving at 6:15. Finally, a quick connection! We bought the ticket, and went outside and waited… and waited. Finally around 6:45 the bus pulled in. But, in broken English the driver told us that we should just wait for the next bus that was coming in 10 minutes or so – looking closer it seemed that maybe the bus was full. It was a bit confusing because he did let other people on the bus. But, it was the same answer for us and another couple of backpackers… The bus pulled out of the station and we weren’t on it. Needless to say, we weren’t pleased.

We had just started to settle back in when we saw the bus driver run back into the station on foot. The ticket saleslady starting yelling at home, pointing at us and the other couple. The driver motioned at us to follow him, so we walked briskly out onto the side of the highway, where we dodged traffic to throw our bags under the bus. We got on the bus and discovered that it indeed was full. We found a spot near the rear exit where we could sit semi-comfortably in the aisle. Della did get a seat offered to her by someone halfway through, and ended up having a pleasant conversation.

So, another frustrating trip on KTEL. There are more stories like this coming as well… 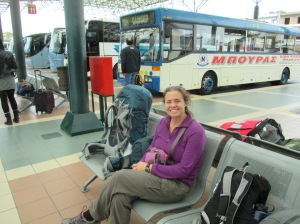 Since we were a little unsure about making it all the way to Sparta, we didn’t pre-book anything. In general, there wasn’t even that much in Sparta listed on websites like hostelworld or Booking… Sparta just doesn’t seem to be on the tourist radar as much. Lonely Planet did list one budget option which didn’t even have a website, so we decided to just show up at it and hope they had space. Luckily, the Hotel Apollon did have space and turned out to be a nice place to stay. We had a spacious room, and a pretty substantial included breakfast every morning. The front desk staff was also very helpful with any questions we had.

Eric working hard on the blog in our room

The view from the balcony on our first morning

The view from the balcony the morning we left 😦

The most renowned site in the Sparta area is not actually the ruins of the ancient Greek civilization, but rather the ruins of the medieval fortified Byzantine city of Mystras. The city is built on the side of a mountain just 5 km away from Sparta. Normally you can take a bus to Mystras from Sparta, but the day we wanted to go was a Greek national holiday, so it didn’t seem like buses were running. Instead, we ran into the same couple that was almost left on the bus from Tripoli to Sparta, and we agreed to share a cab to the site. The cab dropped us off at the upper entrance – highly recommended since it makes it easy to walk down through the ruins. We did just that: started at the ruins of the castle at the very top, then worked our way down, visiting monasteries, the palace, and residences on the way down. The monasteries were both abandoned and active with some old but well-preserved frescoes that gave a glimpse into the Greek Orthodox culture as it existed during the late Byzantine period. Mystras is considered as one of the last remaining centers of Byzantine culture until the empire fell in the 15th century. We got particularly lucky, the day we visited, the site was free! That was exciting after having to pay for a cab to get there… and back. After visiting the site, we were able to get a cab with our fellow travelers back to Sparta from the lower entrance.

The ruins of the castle of Mystras

It was pretty cloudy up at the top

Happy to be on top of the castle

The modern city of Sparta can be seen in the distance

One of the monasteries

Frescoes on the ceiling of the monatery

Interior of a monastery Jelfie

A monastery built into the rocks

Looking back up the mountain at what we walked down. You can see the castle at the very top

Back in town, we took a visit to the Museum of the Olive and Greek Olive Oil. It may not sound interesting, but we found it fascinating. The top floor of the museum gives the history of the olive and discusses how it and its oil can be used for a wide variety of purposes: food, light, rituals, etc. The lower floor discussed all about how to make olive oil, and had examples of the different machinery that has been used to make the oil from ancient times until the present.

All the uses of an olive

Della about to perform the pressing stage

Later that evening, we had to test out the use of olives as food

We did decide to visit the ruins of ancient Sparta, but as our guidebook warned, there isn’t much remaining. The Spartans were much less interested in building temples than they were in training warriors. Just north of town, there is a small site that you can wonder around in free of charge. There are the ruins of a theater, and some scattered remains of structures from the acropolis on top of the hill. It does take some imagination to appreciate them, but the site does also provide some nice views of the surrounding valley and mountains.

A statue for King Leonidas (main character in 300)

The ruins of the ancient theater

From the acropolis, looking down at the theater

We think this was the ruins of a temple?

After being in the artificial town of Olympia, it was kind of nice to be back in an actual town where it seemed that real Greeks lived and the shops and restaurants were not geared to tourists. However, the first night we did end up eating in a restaurant in which every other table was filled with tourists (a group of British high school students on a school trip). The second night was the national holiday, so all of the sit-down restaurants were packed with celebrating locals and we just chose to eat in a less-crowded Greek fast food place. Our final night in town we ate at the Lonely Planet-recommended Tsipouradiko. This was our first experience at a place without an English menu, but luckily the waiter was able to recommend a meatball dish that we ended up enjoying quite a bit.

Dining with the British students

Eating at the fast food place

If you go into Sparta expecting to see sights from the movie, you will be sorely disappointed. Since that wasn’t our expectation, we enjoyed seeing the sights that the town did have to offer. And we appreciated the chance to be in a city that wasn’t just a tourist attraction as well. The weather was a little gloomy for us to completely love our time, but we definitely enjoyed our visit and would recommend it for your Peloponnese itinerary.